Kirt and McRadish (Burrows and Badgers)

Some more finished pieces for my Burrows and Badgers collection, this time a couple of town guards to protect my village that I’ve created for the setting of my campaigns, along with a signpost and bulletin board. 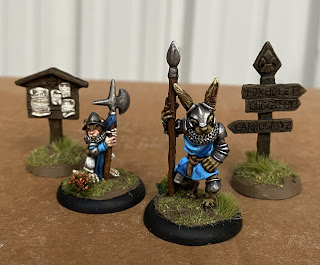 Kirt is a native of the village in question (a village name still a work in progress) who helps keep the peace from both outside and internal threats to the peace and quiet order found there. Somewhat skilled with his spear, young Kirt can often be seen hopping about poking at the air, practicing against shadow enemies like a kit or cub at play. Most in the village question if the rabbit’s level of maturity is up to the task of providing protection the to the village’s population. 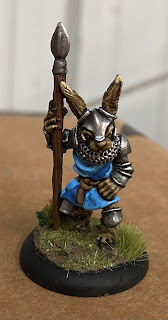 Tried to give this chap amber eyes. The interwebs says rabbits can have them, so why not eh? 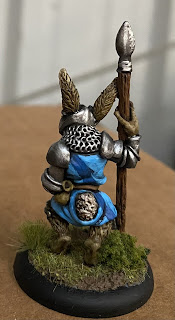 The blue uniform was taken from online pics of a medieval Knight of Antioch. Thought the colours and diagonal stripe were kinda cool.
This is Tavish McRadish, formerly a clans-mouse from the wilder lands of Strath Clota across the northern border. No one knows why this former tartan wearing mouse decided to settle in the village, but they are very thankful that he has been willing to step in to help protect the settlement from any threats that might arise. 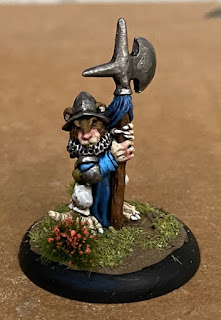 Same colours worn as Kirt. Was very tempted to hack off the polearm head and replace with a spearhead to match Kirt but decided to keep it as is. I mean, he’s a cool sculpt already, no need to mess with a good thing. 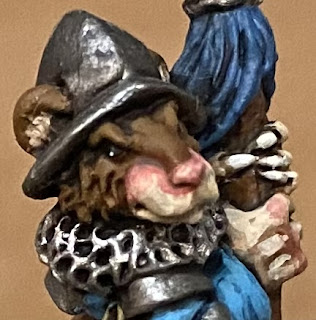 It is no secret that Tavish is a great fan of the local strong spirits and he often suffers from sour smelling breath becaus of it. (Nose and cheeks made rosy to show this) 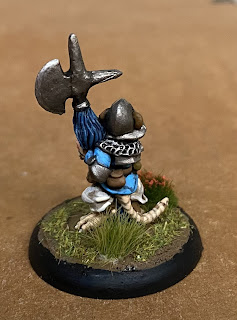 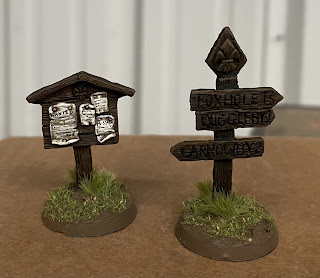 These two scatter pieces are actually Oathsworn Miniatures scatter terrain efforts from their Burrows and Badgers range. I got them as freebies for backing a past Kickstarter campaign of theirs. Nice sculpts to add a little flavor to my tabletops and painted pretty simply.
And that’s it for this post. Lots more Burrows and Badgers figs from the unpainted mountain on my paint table including some more civilian denizens of my soon-to-be-named village!
Stay well all,
- Dai
Posted by Dai at 23:11