*No fancy pre-amble to this battle. Just imagine – it’s the 18th of September 1862 and the Battle of Sharpsburg is just over, the bloodiest day to date in any American war. Jean-Claude Pedisclaux’s brigade was held in reserve and didn’t see combat during the Battle, but is used in a rear-guard action to aid in giving retreating forces time to safely get away. The twin hill-ridges are seen as a position to hold the pursuing Federal forces who would otherwise set up their deadly artillery batteries to bombard the Confederate columns.  General CJ Thompson’s brigade leads the vanguard of the pursuing Yankee army.*

On Saturday, Stewart came over in the evening so we could continue our ongoing Longstreet campaign – as the title suggests “Game 3”.

Per our previous two games, we randomly rolled up the scenario for the day and got yet another defensive one, “The Hilltop”. With my bonus from last Campaign Card draw in scouting, I easily won the pre-game scouting roll to determine who is Attacker/Defender and chose to defend the two hills that were the objectives of this game. (Stewart’s now TWO full batteries of Artillery would have to come to me, thus taking away that nasty advantage to a certain degree for some of the game. Well, until they got in range!)

With so many bases lost in a single turn Stewart is forced to make a force morale check. a 1-4 on a d6 and he continues (And probably puts my boys to flight.), but, he rolls a 6! The massed casualties on the Northern army are too many to bear and the order to withdraw is given. General Pedisclaux's boys jeer at the back of the retreating Yankees, though their victory was at some cost as their own regiments suffered this day.

The inter-battle phase was the last thing we were able to fit in as it was late by the time the battle was over. Actual losses were calculated for our forces and the effects of Typhoid in the camps. This saw the remainder of my brigade lose way too many bases.... a 1-in-6 chance to lose a base of troops can be SO devastating! Campaign cards saw me finally getting some Artillery reinforcements, infantry for a couple regiments and yet another full cavalry regiment of Veterans. In order to see my army stay at the minimum army size for hte campaign in 1862, I also got a new regiment of recruits.

[O and my general was promoted to 3 Eagles, whilst Stewart's was not and stayed at 2 Eagles. After this battle, we are tying on EP's with 13 each.]

Think we'll be getting in Game 4 in a month or two as we both felt a game of Regimental Fire and Fury or the new Sharp's Practice 2 was in order to mix things up a bit.

Hopefully next up a post with some more Winter Soviets, AND some new buildings for my snowy Ostfront Bolt Action games!

Started with some sort of medium brown by Games Workshop. (Same brown I've used for basing for years now.) Then a mix of Army Painter snow effect, small squirt of Elmers Glue and a drop or few of white paint. Mix well and apply with an applier thingie. Add some tufts as I saw fit and the odd dark green foliage clump and viola. 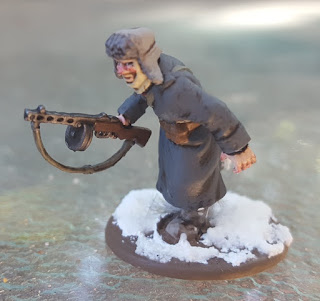 Also finished up 1/2 of a small commission until my neck turned traitor on me and had me resting like an invalid again in extreme discomfort. Years of sitting at a desk are starting to take their ugly toll.