Not had much energy for painting of late, so these have sat in a "mostly done" state for a while, until this last weekend.

These are the first five of Warlord's Soviet Veteran metal sculpt squad. A nice set with some crisp interesting design elements. The only complaint about these minis is that there is no obvious loader mini for the LMG team. I sorted that out though by lazily sticking a plastic LMG magazine pouch onto one of the most likely of them to be the loader. (He's being painted up right now though) 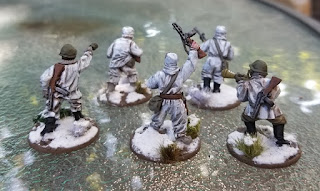 The distraction was this cheeky impulse buy, a see-thru green plastic Reaper Bones mini called "The Summoning" (I believe). I just liked the sculpt and knew it'd be a fun exercise in Slapping on washes and harsh highlighting. I think I got the look I was aiming for. No idea what it'll be used as, but it looks cool in the display case so that's enough for me. :) 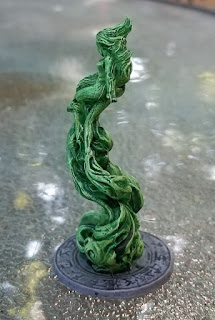 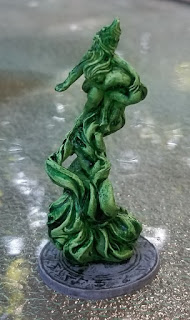 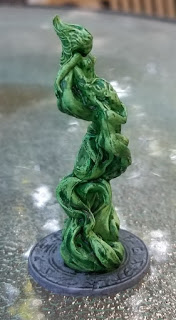 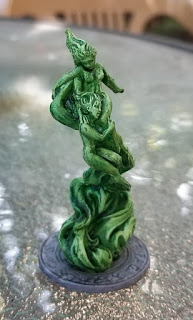 The M3 Half-track is done. Think I went a little overboard with the snow effects, but otherwise I’m happy enough with it. The model is a resin by Blitzkrieg Miniatures and required only a little clean up, mainly on the underside where there were some semi-ugly mold plug things, but aside from those just some slight resin flash. My only real criticism of this model is that it didn't come with any crew minis, but I just went and made a driver out of a plastic soviet tank commander with a headswap. Painting was all done with a brush and markings were unused decals from my T34/85. 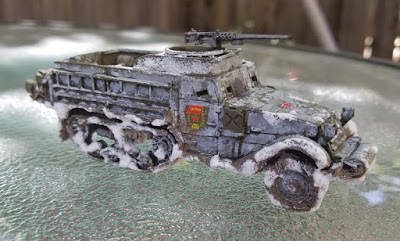 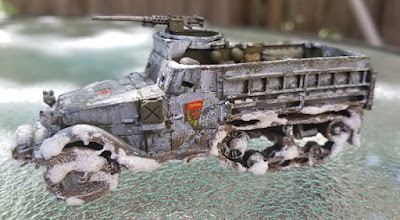 Here's the current standing of the Winter Soviets project in my display case:

I also got these 5 painted up and since taking these pics have dressed their bases. Five to go and then  the squad of 10 will be done and I’ll start working on some Winter Germans which will be a nice change of pace.

We played a 1000 points game with my Soviets versus Densmol's Germans. The mission was an objective grab and hold affair from the main rule book called "Key Positions" and we rolled for 3 objectives total. In lieu of cheesing about the place and dropping them in convenient areas of the table, we decided to stick them in nice non-preferential spots on the centerline of the board and I added some fun crates, etc to give further credence as to why our commanders would have us grab them in the first place. Once turn 6 comes around (And a potential turn seven, dice roll dependent.), who ever holds more objectives uncontested wins.

Densmol's list was (to the best of my memory) as follows *All Regulars aside from Veteran SS*:


I decided to use my list I had hoped to take to the tournament last month (But never did.) *All Regulars aside from Free Inexperienced infantry*:

The game was lots of fun with some really cinematic events and a LOT of rules referencing due to us not playing for months. We also didn't declare what all the terrain elements were so buggered up there a bit too with some silly maneuvers that wouldn't have happened if "x, y or z" were the case. Regardless it was super fun, lots of dice were thrown and models removed due to outrageous casualties!

Hope you enjoy the write-up and half-arsed pictures! :)

For reserves, Densmol held off his half-track with his Lt+pals and a Heer squad inside. I chose to have my Scout squad come in outflank on my right side (Not available until turn 3) and my Inexperienced Squad in the truck to shore up any gaps that might appear in my lines. The rest of our stuff came on from our respective table-edges on turn one.


At this point, it's the bottom of the 6th turn. The only way Densmol could manage to pull back a draw was if he successfully rolled for a possible 7th turn. He didn't and with two objectives in my hands to his one, the day was mine.

It was fun to finally get in a game after ages and even though we were fluffing our way through the rules and I was swearing up a storm due to his stupid Tiger and it's "Tiger Fear" rule causing me to miss multiple Orders tests, we both claimed a good time was had.

If you made it this far, well done - you win too.

Here’s a bit of a “State of the State/housecleaning” address.

*No hobby progress, so ignore this post if you’ve no interest.*

My hobby has been sorely lacking in direction of late. Recently, my efforts to paint a “bit of this” and a “bit of that” really hasn’t been satisfying my needs and I’ve been feeling somewhat in a hobby “Limbo”.
Well bugger that lark. Things need changing up around here.

In a previous post I mentioned that I have a large number of unfinished projects, these are in part due to a hobbyist’s nasty dose of “Shiny-itis” - Constantly getting distracted by new things and setting old unfinished projects aside in lieu. This utter lack of self-discipline is a rot in a hobbyist’s core and I’ve decided to set that nonsense aside and finish stuff.

My number one game to paint for and play (And by “play” I mean, the maybe 3 times this year that I’ve been able to so far…) has been Bolt Action. I’d begun my dalliance into this fun beer’n’pretzels WW2 wargame with my Late War Winter Soviets and I’ve almost gotten to the point of being able to call my whole collection that mystical target of “Fully Painted”. (It’s true, it’s true.) With only:

1x Medic
2x Anti-Tank Rifle teams
1x Light Mortar Team
and the remainder (8 figs) of my Winter Vets boxed set to paint I’m so bloody close to being done with my current collection.

Once I’d chosen the Soviets as my primary force, I knew that I’d want to be able to offer games at my house for mates to play so went and purchased the entirety of a matching Winter themed Late War German force. Thus far I’ve only painted up my Hetzer Tank Hunter and the NCO of a Heer squad for them. What’s left are:

All of these are primed and based and just sat waiting for me to paint them. I’ve avoided getting back to them mainly due to having never painted WW2 Germans before and being irrationally intimidated by the prospect of painting Camo uniforms. Silly really.

The last part of this Winter project is the table itself. No point in my mind to start collecting Winter themed armies for home play and not have a likewise themed table to play on. So I bought a large piece of white felt, snowy trees from China and some lovely Eastern Front buildings by CharlieFoxtrotModels to use as terrain. 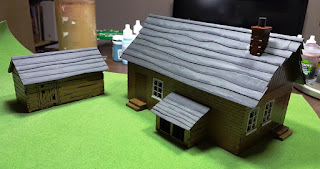 This being the 1st of August, that gives me five months to get this all painted and ready for gaming and will give me the chance to call my Winter shenanigans DONE. (And feel like I got something completed for once.) And there you have it – a self-imposed deadline and some much needed direction for my hobby, call it a "pledge" of sorts. Wish me luck!

(Now I just need to find someone to buy all my 15mm Flame of War Commonwealth to make room in my display case for all these Winter projects…)
Posted by Dai at 12:43 25 comments: