Still crazy after all this time

Somehow I have lost the mojo. Not to say that I've been completely inactice since my last entry, but I've since found it terribly difficult to sit and work on a-n-y-t-h-i-n-g of late. No sooner have I set up my workstation in the living room, than I find myself just sat there wondering why I set it all up in the first place?

What work I have managed, is to start painting a 5-man squad of Raven Guard Sternguard for my burgeoning Space Marine force. Stuck together and de-mold-lined the Tau team members for my upcoming Inquisimunda campaign. Stuck together the remainder of the other teams bar (I think) three characters - the Rogue Trader Crew's navigator, the Nurgle Coven Magos and the yet to be purchased Paridal Ordo Malleus Interrogator. Then it's on to painting.

That is, if I can get my mojo back.

I think it is down to my workspace. Currently, I have no option but to set up in the living room, upon the coffee table with the floor as my chair. Considering my only opportunites to paint so that I won't take time away from family is in the evening whilst my wife and I watch a dvd or some such, it's kind of like sharing time whilst being horribly distracted sotospeak. I really need to get the spare/hobby room up to spec and soon.

Kinda-rant over. Next entry should be better reading.
Posted by Dai at 13:30 3 comments:

Within my group, there are two Inquisition Cells, both Ordo Malleus, one Puritan the other Radical. They should prove to make some fun and interesting match-ups in game and for any fluff or writeups during the campaign.

I've been working slowly on miniatures for all of the groups that I plan to have involved in my =][=munda campaign, adding new weapons here and doing head-swaps there. My converting skill is sadly lacking when compared to my ideas and vision, so what modifications the posted miniatures will show are relatively simple and in some cases non-existent as I am happy with the bare sculpt as-is.

Neither of these models is ready for paint, though they are the closest of my Inquisition teams who are. Lugnut is in need of some piping and the Countess will have to have some of her armour detail filed off and an Inquisition symbol or two added instead. And of course they need their bases finished.

Lugnut, Ogryn Recruit (Recruit is base rank in an Ordo team - in Necromunda terms, a "Juve".) from the Radical Ordo Malleus team lead by Interrogator Harding Wyndham. (Fething figure is huge.) This Ogryn is a relatively recent addition to the Interrogator's staff and has proven his usefulness more than once in combat situations due to his massive size, strength and stupidity. 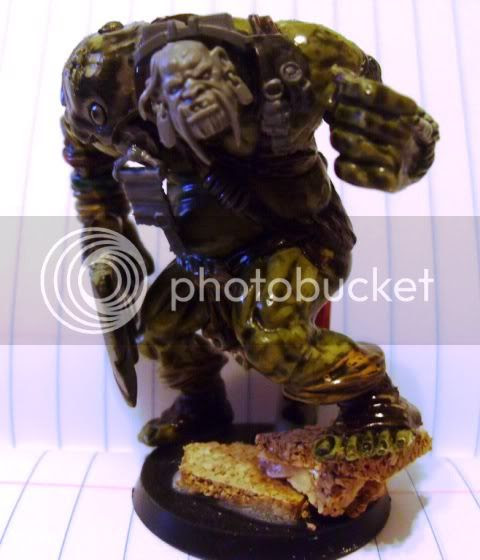 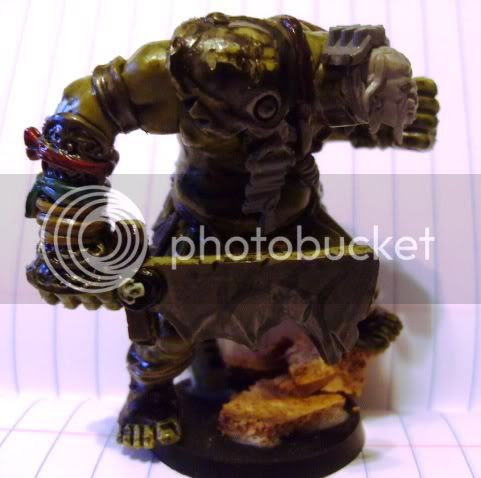 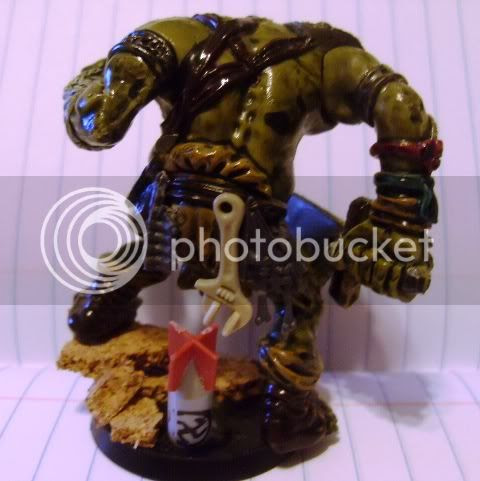 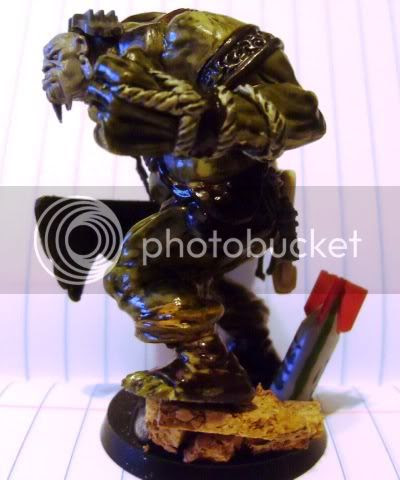 And this will be the Interrogator (leader) of the Puritan Ordo Malleus team, the Radical team's rivals.  Countess Evalambia Triantafilou, a beautiful and seemingly youthful woman (She is actually 68), her thirst for power and respect within her order is no secret and she hopes to attain full Inquisitor status within the decade.

Real bright pic of her (as she was undercoated black from a previous project) so you can see her lovely Werner Klocke detail. 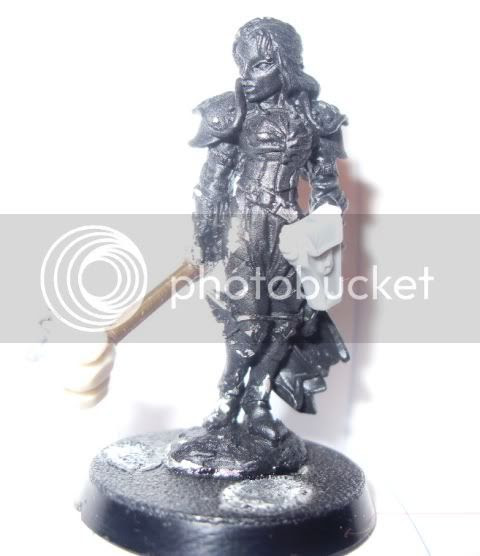 And custom Power Hammer I made for her. (Took a lot of hacking and filing to get rid of her stock sword, I tell ya!) 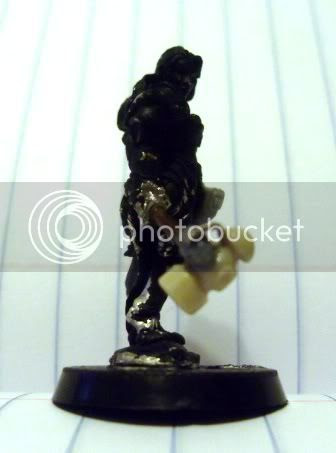 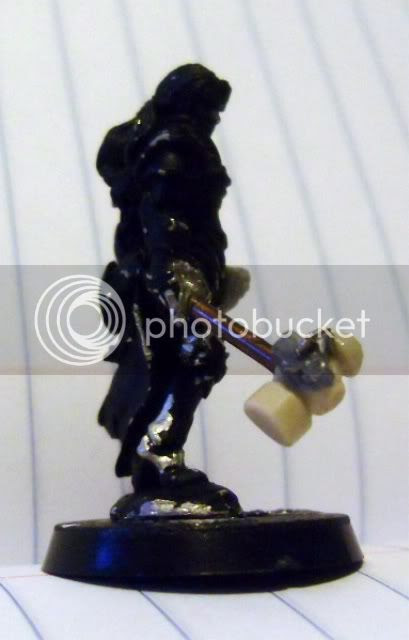 For the =][=munda campaign I'm building for my gaming group I'm selfishly building the Gm's protagonists team that will pop up from time to time, a Rogue Trader Crew built on the inquisimunda rules mentioned in my last post.

I've backgrounds for all these characters, tho they need editing - a lot, so I think I'll wait before I post them until each of these figs is painted and ready for final inspection.

First of all I present the Rogue Trader Prince himself Antolio Etcheverria  de Dios Otero Antormarchi, a man who's scent for profit seriously rivals his love for life - and this man lives on the edge if ever someone could be described as such. 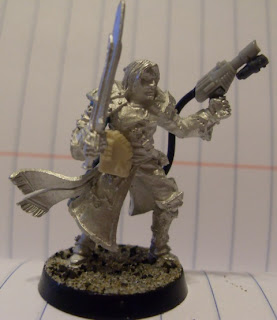 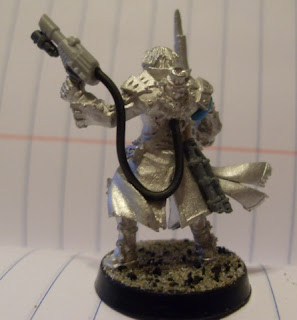 Constant companion and very wookiee-like loyalty offered from this being, K' Kulluk owes Antolio a life debt and has yet to repay it in the Rogue Trader's eyes. 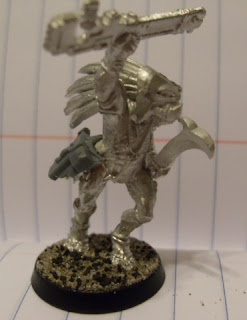 As much detail of his GS bionic eye that my camera will allow. 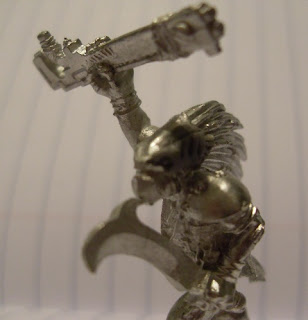 The Ship's Arch Militant, Castro - a Squat who was far from his home when the Tyranid scourge scythed through his homeworlds with (seriously) unbelievable ease. Dour and only emotional when his true aim vapes a target, this Squat has nothing left except his loyalty to his pay. I love this fig so much I'll leave it alone coversion-wise completely, it's my fav ever RT Squat sculpt. 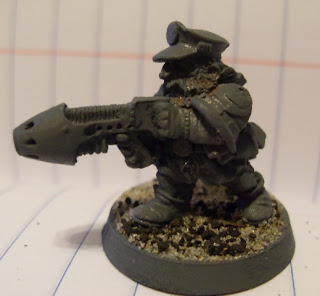 Ship's Navigator Sholuss Fax is a Mantic Ghoul with a few added extras. I imagine him to be a Psyker from a low tech world. 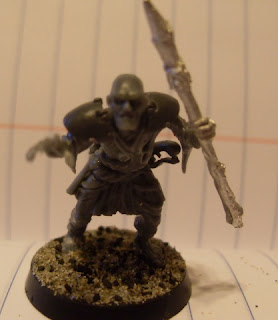 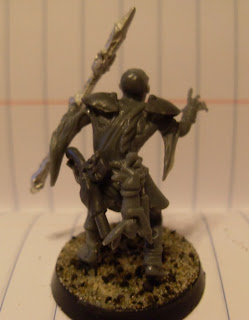 Hersus Vorden is a Crew Member trusted more than others due to being an unofficial illegitemate offspring of the Rogue Prince. I'll leave it up to you to figure out why he keeps it under wraps. 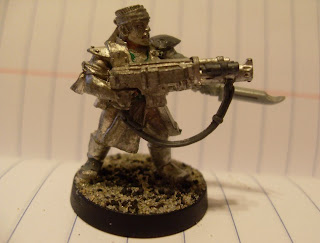 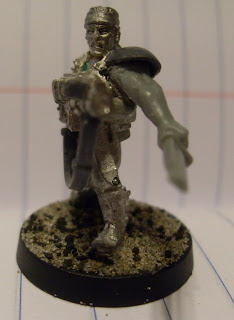 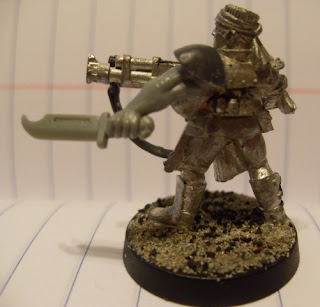 Lastly I offer forth the Hired Gun, Bounty Hunter and former Arbites Sergeant who as yet has no name. I like that he kept his uniform through to his new profession. 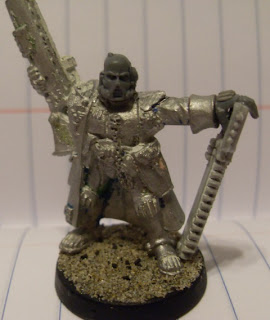 Next up, painted update!
Posted by Dai at 01:04 No comments:

In the beginning, there was...

With much fanfare and rejoicing, I bring forth this offering to the gawds of fantasy and sci-fi miniature painting and converting and hope for their kind eyes to smile upon my unworthy creations.
There's much to write about and little time, which isn't a very good start now is it?
I've never blogged before regarding my hobby - well, not b-l-o-g per se, I mean, I've kept painting logs on a couple sites - my main site with a very supportive and close community Papanurgle and a neglected plog on sonsofcorax where it's quite a bit quieter. But after reading through a bunch of miniature modeling blogs here on Blogspot that I've found linked from wonderful folks @ the dakkadakka blogs (Such as the amazingly talented and inspirational Migsula and Baiyuan) I kind of feel brave enough to start my own. Was thinking of creating my own on Dakkadakka, but I haven't time to keep up with yet another forum and so felt that a blog here would be more manageable (And if no-one stops by to comment, it's no big deal cos I think I'll only invite one person to come by to scrutinise my creations anyhow.). 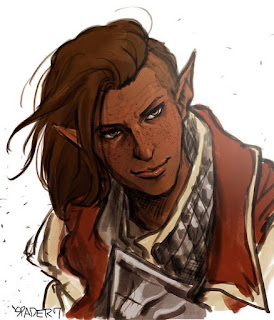 A little background to my hobby.
I've been in the hobby on and off since about 1987. My first army being a Warhammer Fantasy Skeleton effort that fared poorly against a plethora of dwarf armies and so I quickly gave up. I then found friends who introduced me to 40k and I got hooked, Squats being my first love (And Nurgle 40k my 2nd) and thus started my love affair with the Dark Future that awaits us all!!!!! Or not.
The last game of 40K I have played was when 2nd Edition came out. I have read through the current rules and find them wanting. (Why this company caters to children and the aptitude of retards I have no idea?) So my hobby is almost purely one for myself and the sense of calm painting and converting brings after a day full of mundane local government work. 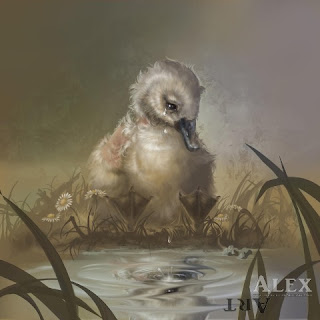 My painting efforts are also not limited to the Games Workshop environment, I also attend a weekly roleplay gaming group with some close friends and am the elected painter for any figures that may be needed, so I have plenty of Reaper and Privateer Press (And a few other brands) mini's that are in the works too.
Currently.
Right now I am deeply inspired by the discovery of Inquisimunda a modified rules system based off of the awesome game Necromunda that GW released in the 1990's. After finding Migsula's AMAZING WORK created for this system I couldn't help myself and have dived deep into a lush pool of creativity that I find wonderfully exciting - so much so that I have managed to convince my gaming group to play a wee Inquisimunda campaign that I am getting together.
And that's where I'll leave this first entry. Hope some will come back to check in on my progress and I'll be certain to post pics of what I'm up to and a description of the lists I'm working on soon.
- Dai 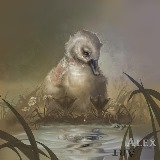