When i said I'd finally get started on my WW2 Winter Germans, I wasn't lying.

This is the force's Lieutenant and his adjutant/Platoon Sergeant pal all ready to lead the way against my array of Soviets. They are both very characterful sculpts with some nice facial expressions. After some patient base coating, both ended up being rather fun to detail. Think I got their kit painted in the correct colours too. 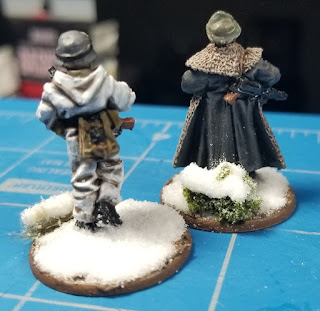 I also got a start on those Giant Spiders too. Just simple washes. 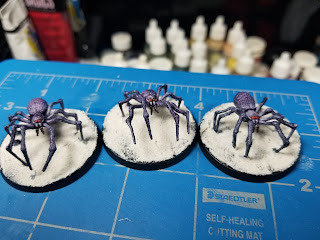 On the Painting Desk

Whatever nasty flu-like virus is going around has buggered my household up royally this past week. Wow, really hope this one doesn't hit any of you who visit my humble blog. I couldn't sit at home any longer watching re-runs of Star Trek the Next Generation  with the ex or waste any more time on my new PS4, so I came to work, probably too early in my recovery, but at least I am not going stir-crazy at home!

In an effort to kick my hobby mojo in the arse, I started work on a few things. Nothing is finished, nor even close to being, but at least it was a start. Let's get 2018 hobbying going already!

The photo shows what is currently grabbing my butterfly attention span - Fantasy Giant Spiders, ruined farmhouse and outbuilding for Bolt Action and.... yes, the first of my Winter Germans for Bolt Action. More to come!

This year has been one of mostly lows in my personal life. That in turn has affected how much hobbying and gaming I had gotten done and has impacted my end of year hobby motivation as well. Currently, my mother-in-law has lost her 4th battle with Cancer and has been in home hospice care for the past month. Thankfully she has managed to hold on past my son’s 13th birthday, Xmas and on into the New Year. But still, the sadness in my house is sucking the energy from me to do anything productive.

Regardless, this year has seen some hobby work done. I had big plans in Autumn to get my WW2 German army started on, but that’s stalled (For now). I also got some of my random Fantasy Collection and Sci-fi/WH40K minis painted. I didn’t buy as many minis this year (On purpose), though there were enough additions to the unpainted mountain to make any painting gains seem paltry in the grand scheme of things! ^_^

I haven't been all that active here in the last quarter and I hope you'll forgive my not commenting all that often on your blogs. That will change, I'm sure as we get further into this new year. Over the year I managed to put up 40 blog posts, which is a record for this humble blog for sure.

I tallied the fully-painted progress for the year as follows:

15mm Vehicles:                1 (Think this was a jeep or Universal Carrier or something. Not impressive considering how much still needs tackling.)

And…. That’s it. Not horrible now I look at the numbers, but certainly not great.

This New Years weekend did see a little painting though as I was determined to get those last two Soviet Winter Veterans done so that's the squad and my army can be claimed as that near mythical title: FULLY PAINTED!!! Encouraging stuff! Now there's almost no excuse to not paint their German opponents. Well, that is, IF my Canadian/Commando Dieppe project doesn't get in the way. Or my Chaos warband, or my Scifi rpg minis project, or or or..... So many projects. -__- 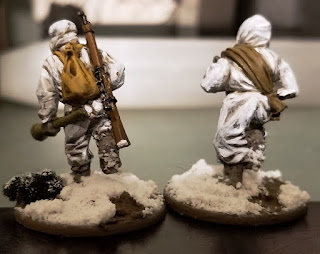 Lastly, Sean from Sean's Wargame Corner blog was in town last weekend from his home in Arizona and we managed to head to my LGS to play a game of modified Shadow War Armageddon that involved Ambull husbandry and both of mine and Densmol's teams of Ambull cloaca inspectors were decimated during the game with no victor at game's end. Super fun though with lots of laughs. Keep an eye on Sean's blog for a post detailing what happened during that game with lots of nifty pics taken.

Thanks to all who pop over to read my posts and are kind enough to leave comments. Without your encouragement, I don't think I'd be as productive as I am. Here's to a happy hobby 2018 to us all!
Posted by Dai at 13:24 32 comments: