Duel in the Desert Tournament AAR from 14th March

On Saturday, I attended the Norcal Flames of War Tournament Circuit March tourney at the Red Lion Hotel in Sacramento. The theme was "Duel in the Desert", 1650 point lists restricted to the North Africa book and any corresponding .pdf's.

Ten players (Including the TO and his son.) attended and a fine day of gaming ensued. This was a strict red vs blue setup with 3 Italian, 2 German, 3 British and 2 American lists present. The TO allowed Mid War Monsters as well, though I think only his, his son's and one of the Italian lists featured any.

If you've been following my blog for the past 4 months, you might have noticed I've been painting Desert British units that I'd selected to fill out a particular list as follows: 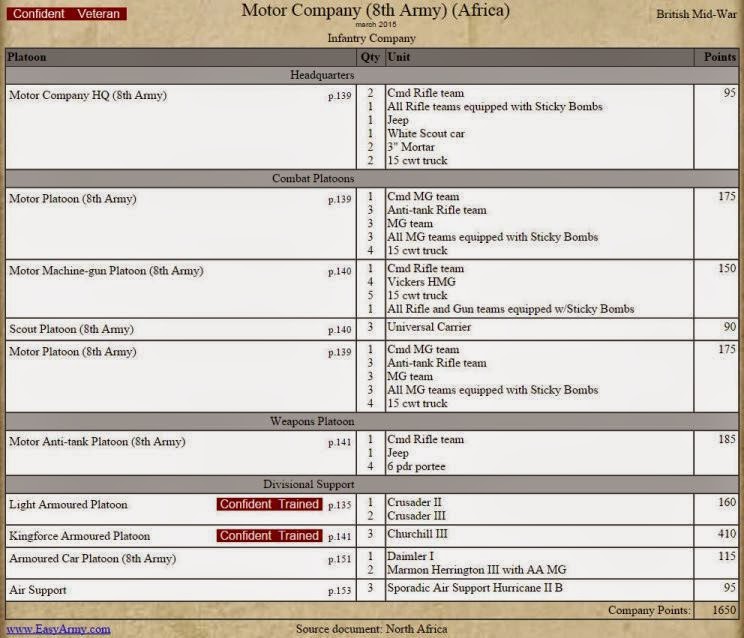 I always loved the rousing story of El Alamein and this list has all sorts of elements that could (And would) have been present during the 2nd battle. Plus, there are so many different types of pieces to paint, I knew it was going to be a lot of fun hobby-wise too! Just for list-building's sake, there is pretty much almost everything one should require to deal with just about any threat I would expect to face in the 1942/3 North Africa theater. My only real fear were Tigers - my poor 6-pounders were really not up to the task, so that's why everyone and their brother got Sticky Bombs! (Not that I even used them once....) The only real weakness I can think of in this list is the small unit sizes meaning I'd have to be careful maneuvering about the board prior to assaults. Night Attack was the flavour of the day.

My Game 1 as versus my nemesis, Richard Gagliasso and his Italian Bersaglieri in Counterattack. Four tournaments in a row now I've played Rich. I am in firm belief that he has magical dice manipulation powers, for every game we play my dice roll even more 1's and his own a veritable plethora of 6's. -__- Regardless, I set up well with two strong groupings of mobile assets each headed to an objective under the cover of darkness and was ready to assault almost on Turn One, but it doesn't matter how good plans are if you can't hit a damned thing when you shoot. So my assaults didn't go in as his defending troops were unpinned in buildings and my other group managed little more than managing to take out an Anti-Tank Gun platoon and severely maul (But not break) some allied German Grenadiers.


After the first round was done (The Axis beat just about every Allied player I believe.), our armies were put out for display and for players to vote on for the Best Presentation Award.

Game 2 had me face another player who I struggle to beat, Dave Ripperda in Hold the Line. Dave brought a German Infantry force with mobile Artillery including two Bisons (Which were bloody nasty.). I opted to Night Attack again in the hopes of swamping him with stuff before Day broke and he was stuck only being able to place one platoon on the board at the start of the game, (His Wespe artillery.) with two others being in ambush (Two large infantry platoons.). This game started a little better for me and my boys made good progress rolling toward his lines all mounted up in trucks with tank support. Unfortunately, he popped his ambush on turn one in a long line and my attack stalled, then Night turned to day and with so little terrain, my boys were munched. I did well enough to kill his Bisons and almost took out both his Wespes and an infantry platoon and land on an objective for a possible win, but in the end I again lost 2-5.

My last game was against Densmol in Encounter. By this time though I was downspirited after two failed attacks and so declined to Night Attack a third time and instead chose to defend against his German Grenadiers (And TWO Tiger 1E tanks!). Things were actually going pretty well and my plan, including dealing with those Tigers was pretty good. That is, until all of my tanks, showed they were bloody crap and couldn't even run over a Nebelwerer rocket artillery emplacement... My planes came in almost every turn, but failed to destroy even one target. I tried hard in this game but couldn't even earn myself a point and lost 1-6. Bit of a poo finish for me in the end - joint last place!


After this, I stopped taking pictures and pretty much gave the game to Densmol. He ended up almost winning the whole thing, ending 2nd place Axis with Richard Gagliasso getting 1st place. Wyn Robertson got 1st place for Allies. Russ Moore won Best Sport and in the end my day was made all the better as I got the award for Best Presentation, which made all the blood, sleep and stress spent on the army I brought worthwhile in the end!

This is the final platoon I was able to complete for Saturday's (March 14th) tournament at ConQuest Sac. (A tournament AAR with pictures [shock... horror] will follow in my next post.)

I also managed to get their truck transports done but neglected to photo them before they were packed away for the tourney.

The basing was done in the same format as my previous desert stands, Liquitex Sand Effect Medium, then a coat of Vallejo Middlestone and a heavy drybrush of GW Bleached Bone (Not sure what it's called now in the newer paint range) over the top of that. I also superglued the odd Silfor tuft to add some more to the visual appeal. From a trip that I took with family to Egypt back in the 90's, I noticed that the sand in the Sahara was a LOT brighter in colour than most photos show. Now, this is probably more due to how bright the sunlight is out there, but I felt a less-yellowy sand colour was better and contrasted all the better also with the darker uniforms of the models. 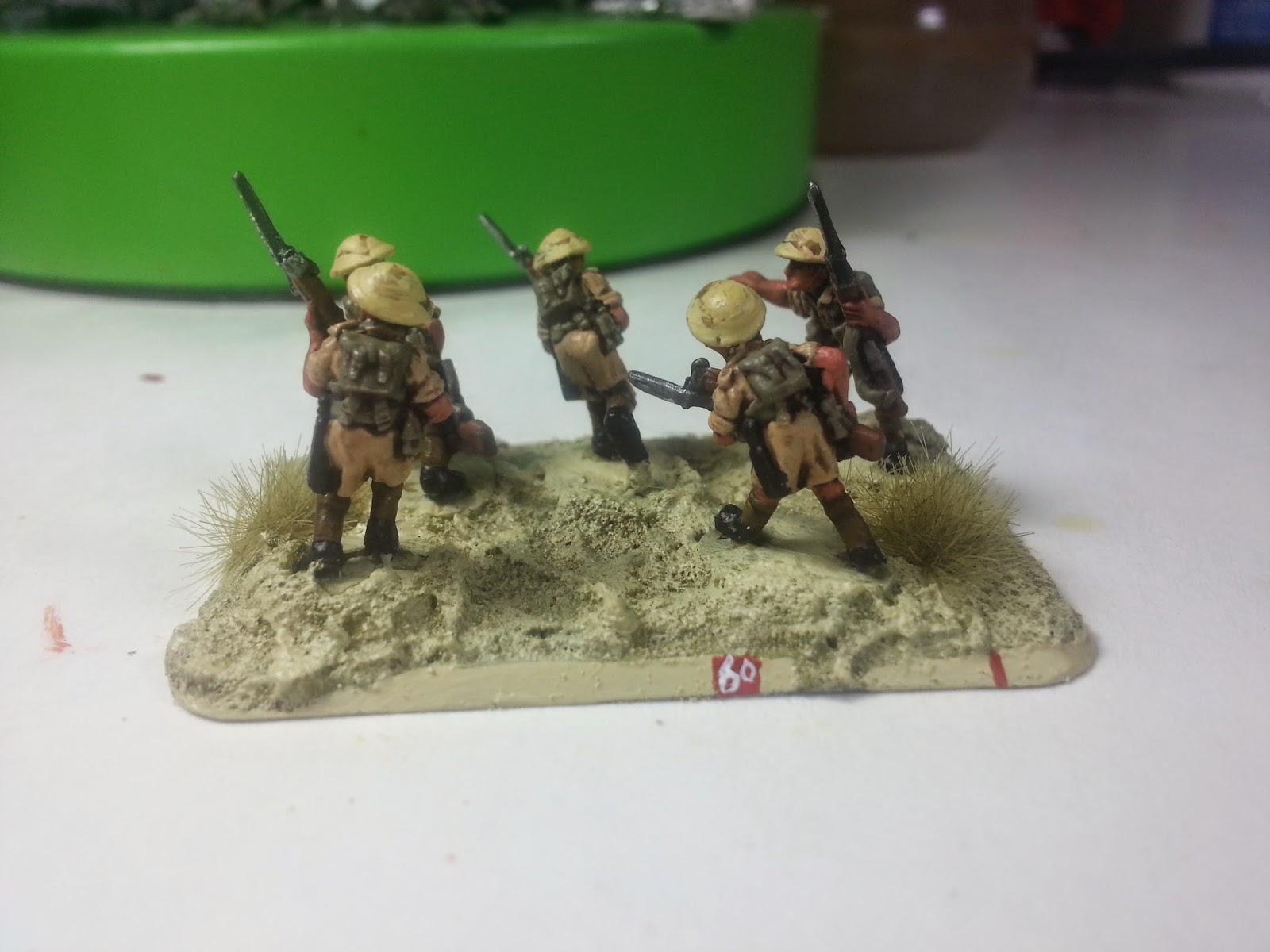 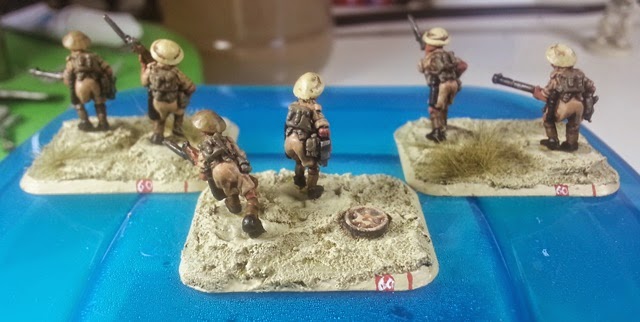 Like I said, after these I went to work on their truck transport section. They look almost exactly the same as the two I painted for my HQ mortars (As seen HERE), so I'll not do a post on them specifically. After I got those finished, I then started cutting off all the remaining infantry figures off their lollipop sticks and glued them on bases so I at least could play with them in the tournament. Of course, being stupidly tired from severe lack of sleep (Trying to get all this stuff painted in time for the tournament.) and so not all that coordinated, I managed to embed my exacto knife deep into my finger. Blood welled up and even got into my then curing Sand medium! So this project really does had my blood mixed right in there.

Next up - my AAR for the tournament that I actually remembered to take pics from!
Posted by Dai at 13:15 14 comments:

8th Army 6-Pounder Anti-Tank Gun Portee and the end of the 6MMRPC!

Over the weekend I finished painting up my North Africa 6-pounder Anti-Tank gun Portees Platoon. I will never paint another one of these again…. ~_~ Annoying as all hell – fiddly bloody monstrosities. This leaves only the two Motor infantry platoons to paint and then any trucks I might be able to fit in before the March 14th tournament! Wish me luck…


Also, the 6 Month Mountain Reduction Painting Challenge (6MMRPC) Is over as of…. Today? Yesterday? Below is a swift summary of the challenge rules and whether I did my usual on these type challenges and allowed all self discipline fall apart!
*The below was copied directly from Dave Brawley’s great blog “Towerof the Archmage” and my own answers thereafter.*
#6MMRPC: Round 1 complete!
This post marks the completion of the inaugural round of the 6 Month Mountain Reduction and Painting Challenge. Let's see how I did...

The rules, beginning September 1st, are as follows:

1. No purchasing of new miniatures, EXCEPT if you use a joker card. Like in a deck of cards, you get two jokers to use on a figure purchase during the six months of the challenge. Could be a blister pack, an ebay bundle, or a single figure...you can't splurge.

SUCCESS! I used both Jokers on my two ACW Ebay lot purchases. I also received my Reaper Bones 2 Kickstarter stuff, but as I pledged for it prior to the commencement of the Challenge it doesn’t count.

2. Gifts do not count against you. Christmas and or birthdays etc. Also, if you're given gift cards by your hobby illiterate family or friends, you can without penalty use them on anything you want miniatures wise.

SUCCESS! Don’t think I got any gifts. Maybe. Nope. Not minis in any case. I think.

3. Paints, terrain (or materials), and other hobby supplies do not apply to the no purchasing rule.

SUCCESS! Plenty of paints and so forth, some terrain and a couple books – all fall under this one.

MINOR FAILURE! Now, if number of posts were to equal one a week, I believe I was good here. (Including this final post – I managed to get in 34 posts in 6 months) But there were a few weeks where I didn’t manage to get a post in within the 7 day limit, but did post up an update soon after. Maybe I get a ½ point for this one….?

5. Zombtober will be part of the 6 month challenge so, Zombie related stuff during October is ENCOURAGED!

SUCCESS! 8 Zombies were painted for Zomtober. 8 disgusting, rotten Zombies. My rpg sessions will be all the more colourful for them!

So what was my final mini count for the 6MMRPC? 16x 28mm, 68x 15mm Infantry and 29x 15mm vehicles. Not amazing, but certainly progress and that includes ¾ of my whole Flames of War 8th Army North Africa company. I’m glad I went and signed up for this challenge. It helped me to keep a handle on my spending habits and I got to both paint stuff to remove it from my backlog and also spurred to stick up other long neglected projects on Ebay (There’ll be more of these set up in the very near future.) After I get these desert Brits off my paint queue, I’ll be moving away from 15mm for a bit to take a break from uniforms in general – most likely do my best to work on my rpg minis backlog. But…. That ACW project is staring me in the face, so who knows how long it’ll be until I get back to 15mm uniformed minis?

Will I sign on to a second challenge if it’s announced? Yes, I think I will (Though later in the year, if it’s held at that time.) – and my wife is happy for that too!