These eight were completed over the weekend. They join the already done Saxon Lord, his two sons and son in law and will make up the two 6-man Thegn units for my Anglo-Saxons.

Kind of happy to see this type forward progress on my Dark Ages project and (including the 3 vikings I'd also done earlier this month) 15x 28mm figs painted in 30 days isn't bad at all for this slow hobbyist.

I've also been working on some of my Confederate Cavalry and managed to get four stands painted, just need to be based - which I'll get done when all eight stands are complete.

As the first month of the 6MMRPC comes to a close, I realised it would be an extra motivator to keep better track every month of my painting progress. So unlike last year, this time around I've decided to post up my Draxian (TM) progress charts in my end of month posts. Hopefully seeing all those boxes change to GREEN will keep me spurned on to victory!


So in the 1st month of the Challenge, that's 16x 28mm (Including my fantasy Zulu warrior) figures painted, my 15mm Confederate Cavalry 3/4 done and some exhaust glows added to my Armada Star Destroyers. Not bad methinks.
Posted by Dai at 09:02 11 comments:

Week 3 came and went and with my Mother's visit from the UK (And the preparation made prior to) I didn't have much time at all for hobby work.

My remaining Saxon Thegns got their basecoats done along with basic washes though and now there's only a bit to do on each, plus shields and basing left until they're complete.

Once again, the models are by Blacktreedesign though are not as well made as their previous sculpts that I've recently previewed. There are some annoying and seriously difficult to remove lumps in places on these sculpts and some of the spears were rather flimsy and snapped off repeatedly. Saying that, for the price, these metal minis have some fun detail and very nice faces (One though was missing the right side of his mustache, so I tried to sculpt one with greenstuff.) and some of their helmets are especially nicely sculpted.

Hopefully get some more done before this weekend's 4th week report!
Posted by Dai at 13:33 15 comments:

Keeping it in the Family (Part - 2 Done and Done and an Armada AAR!

The second week of the 6MMRPC has had me working on the Saxon brothers (And brother-in-law) and also a pair of Viking Hirdmen that will be raiding the Saxon’s lands.

As far as hobby for the 3rd week of the challenge, things will be rather minimal as my mother is coming to visit from England for a bit and then on to my sister’s in Texas. But I have another 8 Saxon Thegns that I reckon I can kick out before she arrives!

Was lucky enough to get in a game of Star Wars: Armada with my good friend Gregg as well. This was only our second game of Armada and so we were still a little rusty on rules, but the game went along nicely regardless with an emphatic Imperial victory (Huzzah!) and the Rebel scum slinking back to the wretched holes they typically skulk within. (A Death Star Laser blast should take care of that vermin problem at a later date no doubt.)


The remaning Corvette and rebel fighter squadrons exited Stage right soon after. Things to take from this game:

1. Rebels NEED to outnumber Imperials if they want any sort of chance at winning. Even the Assault Frigate is too weak to stand up to a Victory Star Destroyer by itself. (Two Frigates though would be nasty)

3. New fighters (Rebel) looked nice, but I didn't feel they added much more to the Rebel fleet. X-wings are still the best fighter in our games.

4. I really need more than just Victory Star Destroyers to play with.... They're cool and all, but variety is really the spice of life.

Speaking of "variety" - any day soon my Gladiator capital ship (Smaller and faster than a Victory.) and Imperial Fighter Squadrons packs should arrive. So next AAR should feature some new toys.

These three are part of the two Anglo-Saxon Thegn (Elite troops) units that are in my Saxons list. The actual models themselves got me inspired with some backstory ideas and so the armour & cloaked warrior is to be the Saxon Lord's son-in-law and leader of the second Thegn units and the other two are the Lord's two sons. To this end, so that they all keyed in with the family idea I made sure to make the mustard-yellow cloths with red/green accents a tie-in. I'm not sure it's historically correct, but it works for my roleplay-oriented mindset. Story matters more than detail after all. 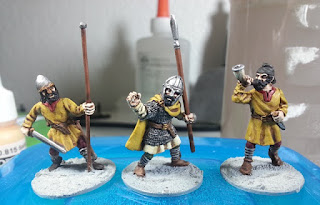 The figures are from the Saxon Command range by Black Tree Designs. The original sculpt for the middle mini had no weapon at all, just his left hand with typical peg on it for a shield - I guess being a commander, he only needs to protect himself and lets his boys do the fighting? As I wanted him to match up with the rest of the spear armed Thegns, I drilled out his fist and stuck a cut-down spear so it looks as though he switched out for a bit in order to properly direct his unit. It'll look cool in the end, promise.

*I'm having trouble researching online for a proper 900 AD-ish Anglo-Saxon banner or flag. I think by that time they had moved past the elaborate dragon looking designs? Any suggestions are welcome on this.*

Still basing and bits to tidy up a bunch of stuff on these and think up some names for each for fun. I won't be putting in a super amount of energy into them (As with following minis for this project) as it's going to take too long to get through the whole lot.
Posted by Dai at 08:16 14 comments:

This is the first official posting for the 6MMRPC for me! Let's see if I can keep up this momentum.

Okay, got this African style warrior done. Decided on a tiger-skin type effect for his shield. He'll be from my own fantasy setting in the rpg I'll be running and... well, I like tigers better than lions, so why not, eh? 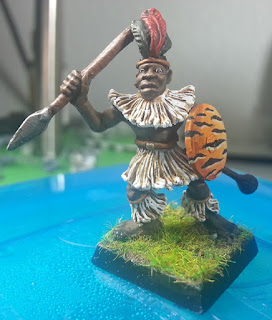 I tried to add the club in with the club-head (Knobkerrie for those wondering - thanks Drax) above his fist, but the sculpt just didn't have room, so he's holding it head-down. Once that javelin/spear has been chucked, it'll be easier to swing from a down position that way in my mind anyhow. 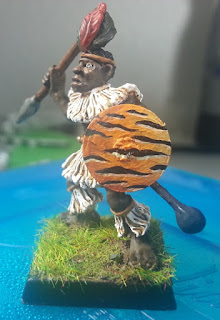 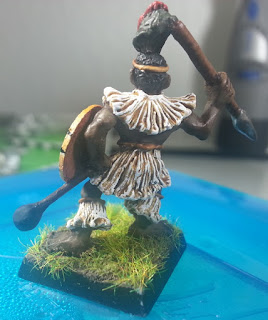 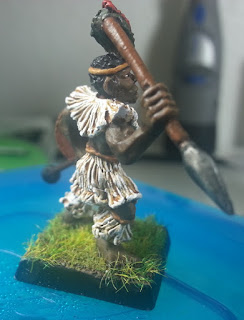 Standard simple basing to match my other rpg mini's. Just wish I'd had a better base (Rounder?) for him prior to painting, but I was worried about removing him from this one as the lead is old and brittle enough as it is. 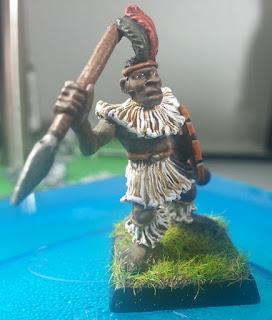 His eyes got a little more work done. Not perfect, but they at least look the same direction and not look like a Japanese anime character. 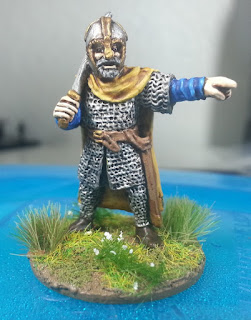 This is My Saxon Lord for my 2nd Dark Ages faction. He's a lovely command sculpt by Blacktreedesign that fits in perfectly with their Hearthguard range (More on those in a later post). 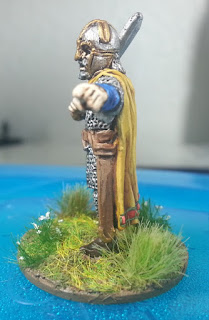 I wanted him to stand out from the Viking Lord and so gave him a grey beard and mustard coloured cloak. 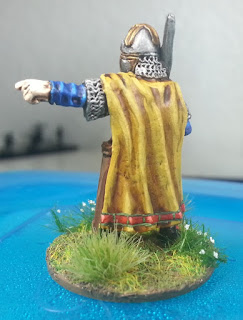 The cloak got a simple cheeky edging design. Nothing special and highlighted rather harshly - but it looks good on the tabletop and that's the look I was after. 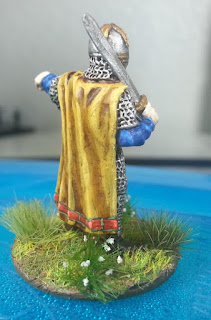 Finally found a properjob use for the flowers scenics I bought yonks ago. 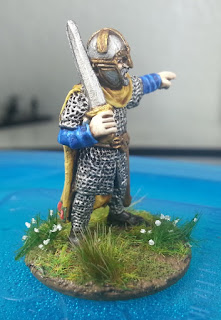 He's heavily armoured for the period, though I'm surprised he cheaped out on a full mail shirt and instead chose a chain-mail t-shirt. 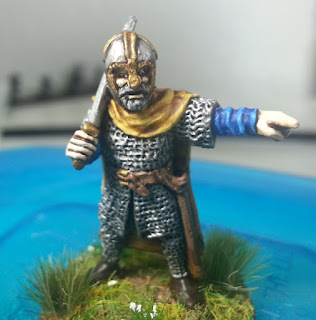 Close up of his face. Those eyes are set so far back into the helmet they wre a right pig to get to, so whilst close inspection shows them as being rather clumsily painted, from arm's length they are just fine. 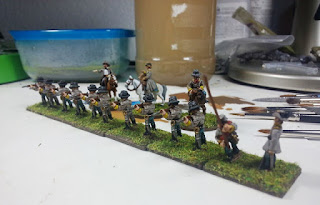 I also sorted out some basing materials for my dismounted Confederate Cavalry. The bannerman will get his flag after I have the other regiments painted up. 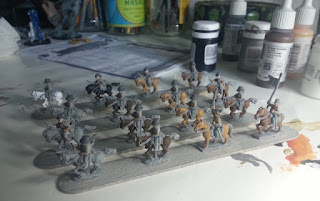 The mounted versions of the cavalry. I was painting the horses and trying to pick enough varying horse colours. I have come to the conclusion that painting 15mm horses is rubbish. 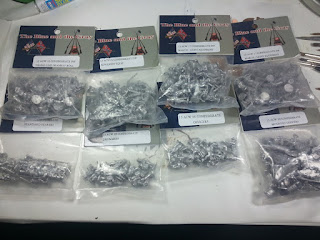 Did I mention "other regiments"? Why yes I did. A VERY kind friend (Stewart - Who consequently was the bugger that got me started on this ACW lark) sent me a very kind care package with enough backs of Cenfederate infantry to make 5 regiments and a bunch of generals. I was very humbled by his generosity. I am also a bit miffed that my paint queue just got 100+ 15mm infantrymen bigger! I've already sorted all these into their respective units and with the odds and sods random loose infantry I already owned have 4x 10-stand regiments and 1x 8-stand queued up. Thankfully this project is not at all a rush job as Stewart is expecting his second daughter and so won't be able to game for who-knows-how-long. Regardless, BIG heaps of thanks go out to him!
Posted by Dai at 13:20 10 comments: