Finding time to paint of late has been tricky, but this weekend my wife had a hair appointment and a shopping trip so out came the painting station and I got to work on some more WW2 Winter Germans in an effort to get that project done and ready for the gaming table!
First up a closer look at the platoon's Sd.Kfz. 251D half-track. These armoured transports were iconic and the Germans used them throughout the war, with other nations utilizing the design for quite a bit after the war's end in their own armed forces. Featuring an MG42 machinegun both fore and aft of the vehicle, they not only were splendid for transporting troops where they needed to go on the battlefield, but also could provide suppressive fire support once the troops offloaded at their destination. Sadly, in the Bolt Action rules set these things are a bit naff, costing far too much points-wise for how survivable they end up being on the tabletop - but they are iconic, so I had to include one in my force!

After the halftrack I got on with the next part of my plan, a 10-man Volksgrenadier squad. Volksgrens (For short) were a type of unit created by Hitler's orders to help bolster his then retreating armies in the later stages of WW2. Whilst they got spiffy new uniforms and were outfitted with the best kit (Read, LOTS of Panzerfausts and Assault Rifles), they were far too rushed to the front lines and received equally rushed training. Their creation was more of a propaganda effort than anything else and their exploits in the field were very mixed.
The first two of my squad are the squad's sergeant and his mate who's about to toss a primed potato-masher grenade.

Not wanting to get bogged down painting all the Volksgren's at once, I then moved on to a support team for these frosty fellows, a nice flame-thrower duo. Another Warlord Games effort, this time from their Winter line. Am very much loving the sculpts and as they were mostly "Greatcoats" as far as painting was concerned, they were relatively swift to get done.

Last up for today's post is an Artillery Observer/Spotter. A fun pose where this "camouflaged" chap is doing his best to stay hidden whilst he gives the artillery crew the co-ordinates for their next barrage into a portable field radio. 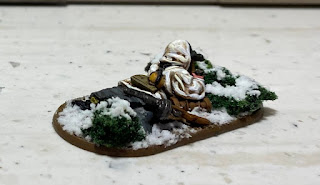 Getting these six things finished up keeps me on track for my personal pledge of a minimum of 2 a week with it being Week 15 of the year and my total of fully painted models up to 30 now. Good stuff.
And that's it for now. Easter weekend will be a family affair and I'll have no time to myself for more hobby so not sure when I'll have anything new to show off.
04/12/2022, week# 15 - 30/100 mini's done
Posted by Dai at 10:48 28 comments: