In my last post I described an event that I have been very much looking forward to, the first I've been able to attend this year. The area's main hub for Bolt Action, Ogre's Den in Orangevale graciously opened doors and allowed the group to set up a 4'x18' table to represent three of the most iconic parts of the Battle for Stalingrad in World War 2 - The Tractor Factory, Pavlov's House and the Volga Crossings. The table(s) looked simply breathtaking, easily rivaling anything I've seen posted online. Andrew Bergthold was the on-the-day organiser and was also celebrating his birthday (So we all got free BBQ'd burgers, kindly provided by his father.) and had designed the overall scenario and specific conditions that each section of the table had to abide by. Each table section had a pair of players for each side playing 5 turns over two connected games. The 1st game we could not affect what was happening on the tables next to us, but in the 2nd game (After we were provided reinforcements, we could, which made for some really fun matchups.). It all made for a very fun and thematic day of gaming, with the overall winner who had the most kills, taken objectives and also managed to get their troops into their enemy's deployment area.


My list for the day had a few restrictions in the players packet, seeing as Tony and I were "Crossing the Volga river". No vehicles (In the initial crossing, though any taken could come on as reserves, no
gun teams larger than a light AT/Howitzer and to reflect the constant peppering those poor sods had to endure on those wooden boats all units that arrive in the "1st Wave" (A turn 1 mechanism in Bolt Action) arrive already having a pin on them.

And here are some of the other armies present at the event - some really nicely painted forces I think! 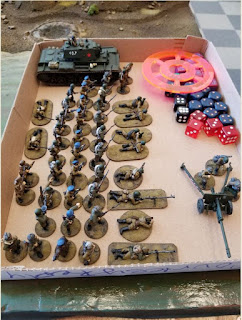 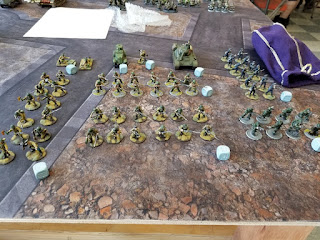 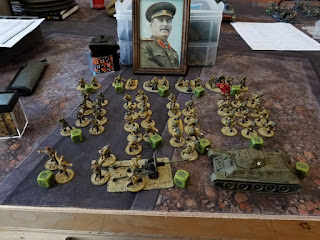 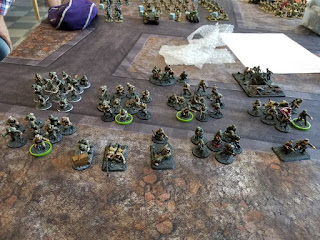 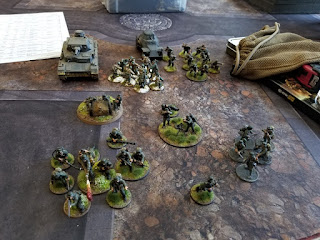 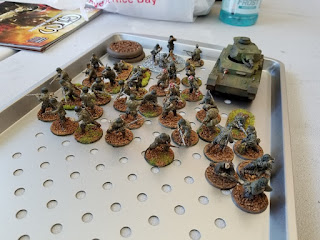 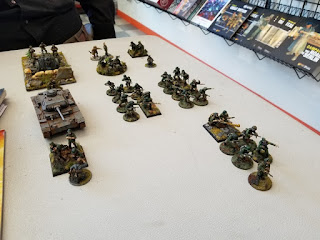 The following are just the pictures I took of the day's gaming; that is, when I remembered to take them. Our main objective was to have more troops on the wooden square just past the beach then the Germans by the end of the 1st round. I will say, #1 highlight of the day was my mates Gregg and Frank from my rpg group turning up to check out the game and my old Flames of War pal Rich (Of Flames of Nerd blog fame likewise dropping by and feeling so inspired he went and picked up a whole new Japanese army later that day! Woo, a new opponent!) who stuck around for the early stages. 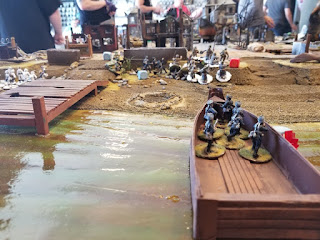 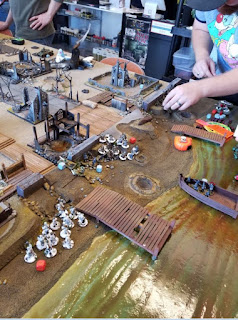 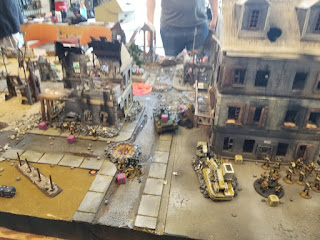 Well, somehow, that person was me. My first #1 placing at any sort of event. :)

Highlights of the game:

1.  One of my fine opponents, Aaron brought on his Flame Thrower team from reserve a mere 6" from a squad of my own poor troops who had just managed to crawl off the beach and take their first step on dry land. Aaron gleefully throws his to-hit dice to spread fiery death upon them and rolls.... a "one", thoroughly missing his shot! Next he rolls to see if his Flamethrower still had fuel left and rolls.... another "one"! Seems the silly buggers forgot to fuel up before leaving for the front lines! (Free kill point for me.)

2. My Soviet partner, Tony (Who's company made the day even more fun), brought along a T-34 tank, which seemed to cause our German playing opponents some concern (Even though, throughout the game, the tank shot and hit NOTHING). So both Aaron and Kat called in an Airstrike by the Luftwaffe Stukas to take it out. Both roll to see if/how the strike was coming in and.... both rolled a "one" at the same time! In Bolt Action, that means the incoming aircraft mistake their own forces as targets and the opposing player(s) (In this case Tony and I) got to pick their targets instead! Whilst the ensuing airstrikes didn't kill all that much (Mostly due to both German forces being Veteran skill level throughout for the most part), they caused enough pins on the German units to be really annoying.

3. Kat's lone remaining Veteran Grenadier that had been withstanding a withering hail of small arms fire and yet surviving all of it, was eventually charged by Tony's 6-man Naval squad and forced to defend himself in close combat! Of course, Tony rolled not one dice enough to take the bugger out and Kat in turn did just enough to win the combat, wiping out all 6 sailors with a cheeky grin on her face. (She now has a reputation for this sort of shenanigan after doing similarly against me in my previous matchup against her)

4. My Medium Mortar team refused to come in from reserves 3 turns in a row.... Then when it finally set up for a shot, ranged in first time and annihilated the remainder of a 5-man Veteran Grenadiers squad. (The Commissar had just brought out his pistol to execute traitors to the Motherland as well...)

5. The last two turns of the day saw a KV-1 tank (Borrowed from Jason, a very nice chap) brought on from my post-game reserves come on over on the Factory table to tackle some nasty stubborn German StuG (that had a heavy howitzer!?), but it couldn't penetrate the makeshift tankhunter's extra-thick armour; and Tony's Ampulet team come on on the same board, paddling an inflatable raft up a sewerage canal and try to lob globes of firey death at the StuG (Also to no effect.). This in turn caused Craig (The StuG's owner) to angrily pick up his tank and claim "It wouldn't stick around". Needless to say, he didn't enjoy the game. LOL.

In the end the day was an emphatic overall Soviet victory and called off early, with the Commies holding all three main objectives and really piling the hurt on the poor Germans. Also, it seems the Luftwaffe were on drugs or something that day because as well as the two fouled-up airstrikes on our table, a 3rd was called in and also fouled up (Destroying it's own German gun team I think) on the Tractor Factory table too, along with a general strafing of the whole board after the 1st round that hit absolutely nothing. (!?)

The winner of the event was... me, with 11 kills for the day, 3 of my own units in my opponent's deployment zone and our main objective taken (And had the game gone on one more turn I would have grabbed one of the German secondary objectives too.).  My first time winning a gaming event too. With my in-store credit that I received as reward, I quickly spent it prior to heading home, leaving with a new Warlord plastic KV-1/2 tank kit, a Soviet Anti-tank Dogs team, Soviet Heavy Mortar team, a 2nd red orders dice set (So I can play armies larger than 12 units total.) and the below Rubicon Models Soviet Studebaker truck (That I glued together last night.). A fine haul! 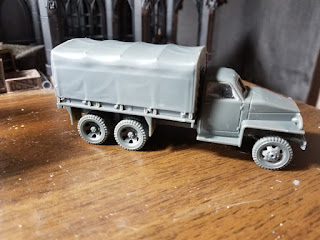 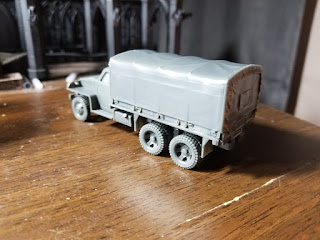 If you got down to this part, then congrats, didn't realise this was going to end up so wordy!

The paint table is a little cluttered right now with many project on the go at the same time. I think a little non-WW2 is in order to clean off my hobby palette?
Posted by Dai at 08:58 26 comments:

My painting opportunities this week ended up being far fewer than anticipated, so this is where these four fellows have gotten to. Still skin/eyes/hair and some tidy-ups here and there to get done and then of course snow effects added to their bases to go.

But, with my regular rpg session taking up this evening, that leaves me with about 30 mins after I get home from work tonight to get all that done!

At the Ogre's Den LGS in Orangevale this Saturday, there's going to be a Stalingrad theme'd Bolt Action game event. Of course I'll be taking my Winter Soviets along and have been drawn to play the Volga Crossing table, attempting to get my reinforcements across the river and head in to back up the beleaguered brave defenders in the city proper.After choosing a list on EasyArmy, I realised I was two soldiers short for one of my squads, so after a wee search, found these minis that fit in perfectly with my Winter Onesie squad of Veterans. They are produced by Annie Norman's Bad Squiddo Games and turned out to be very straight forward to paint up.

They'll provide a 2nd LMG for my Fanatic (Stalingrad selector allows almost all your troop choices to add "Fanatic" to your units.) regs, making the squad rather nasty on the table at range AND in close combats.


Next up the only other oustanding units from my army list, two Anti-tank Rifle teams. No Panzerfausts in Stalingrad, so my poor boys are going to have to try to tackle and German armour with these things. They'll also double up as psuedo-snipers too, which will be extra annoying, I'm betting. :)