I hope some of the viewers I get on here hopefully gave that vid a look-see in my last post? The model's been sculpted from the ground up by a mate of mine from Denmark called Jon Micheelsen. He's an amazing sculptor and this is one mini I for one will be purchasing (Just as soon as I can figure a way to get said purchase past my wife.).  and I hope some of you  lot also like the look of it enough to get one (Or more) yourselves.

No pics today, which as a person with 115 blogs to follow, I know can blow, but painting that Dreadnought took it out of my hobby energy reserves and I've been taking it easy in the man cave.

Saying that, I've not been idle. There has been some progress, it's just slow progress is all.

1. Beastmen Penitents: After getting inspired by Mordian7th's wonderful Beastmen that he's put together for his cool looking Imperial Guard regiment (Clicky!), I decided to put some work into my own Beastmen squad that had been sat on a shelf primed and neglected for far too long. Currently just base-coats though I'm getting close to be done with that stage. Like the rest of my guard though, I think I'll just stick with a tabletop quality paint job as I don't want to get bogged down with these too much.

2. Malcador Defender: A very cool fellow on the SonsofCorax forum put forth a nice article on the From the Warp blog about the best ways for painting vehicles WITHOUT an airbrush that shows a technique or two that I'm going to try I think. Airbrushes are all the rage it would seem in the "littleplasticmen" hobby scene, but I'll be damned if I'm going to pay that much for something I don't know the 1st thing about how to use properly. Aside from that, the Malcador NEEDS to be painted, I mean, that driver/commander has sat there painted and ready to be glued in the top hatch now for a month or something! Some of it's metallics have been painted. I'm torn between a tan/brown scheme or just plain dirtied steel-type colour. Had thought about trying to make an effect as though the Chaos drivers had shoddily re-painted over a loyalist scheme (With parts of the old scheme showing through here and there.), but not sure my skills are up to that task.

3. Brother Captain Stern: Yet ANOTHER Grey Knight commission. And another overly detailed space marine terminator blokey. The fig's been sat on my wee shelves that sit over my painting table for a while now and I know the customer would really like to get him back sometime..... I just... have problems feeling excited about painting Grey Knights. Am I wrong for feeling this way? He's now primed black and ready for his metallics.

4. After valiantly and excitedly slapping paint on the now completed Raven Guard Land Speeder (Clicky!), I have been trying to convince myself to get back and finish off the rest of the Sternguard Vets that have sat on my desk for 6 months or something. Bolt guns and hoses are now silver and base colour for bone-helmets and emblems has been applied.

5. I also went out and bought a crapload of polystyrene from Lowes and a 2'x4' board to start making my long-planned graveyard =][=munda battle board. Have both the Garden of Morr and the Warhammer Chapel, the Forge World Roadside Shrine and am hunting down the best deal on the nicest gravestones I can find. Then it's on! This'll be my first terrain project so I'm kind of nervous I don't feck it up.

So there you have it. once the beastmen are a little closer to a finished state, I'll stick up pics. I also haven't forgotten my =][=munda project and all the remaining team characters yet to see paint, just been hard to feel inspired as my gaming group has seemed to lose interest in the game. Though I could be wrong.

Get one, you know you want to.


It's done! A late night painting session through until 1am last night (Due to my OCD of not wanting to put a piece down until it is finished.), sees my Dread completed. I'm mostly happy with how she turned out, though agree with a comment regarding the three semi-globes on the chest perhaps needing a little extra highlighting and I'll also go back over a few areas with some gloss varnish to make them look slimy (She's had a matt coat already.). Have to say I'm pretty chuffed with how she came out though.

"The fearsome Nurgle Dreadnought, Grizelda is a nasty piece of work. A former Silent Sister caught and entombed in the sarcophagus on a whim by the Daemon Prince Witherlimb, her rages are terrible to behold. Stomping about the battlefield, she takes out her eternal frustrations on any enemy she is pointed at. "

Some more work on my Nurgle Dreadnought. Torso pretty much done not including some touch-ups here and there. Arms are next.

Can you guess what it is yet?

Just what I've gotten done to date. 2/3's of the beast yet to complete! (This model has intimidated me since it arrived last December. SO.... MUCH.... DETAIL.... and all of it so beautifuly sculpted too. Hope I end up dong this piece justice!) 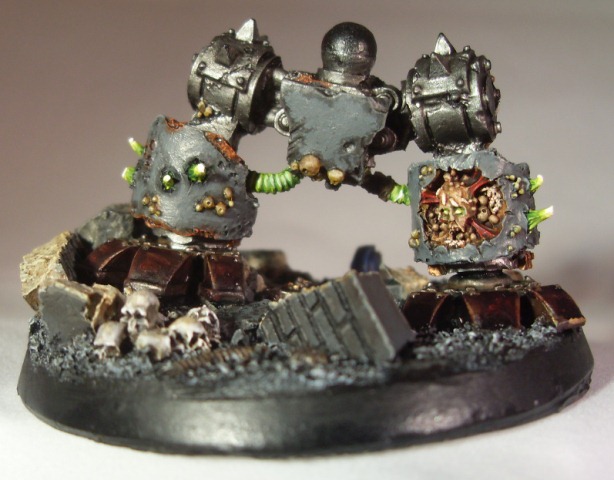 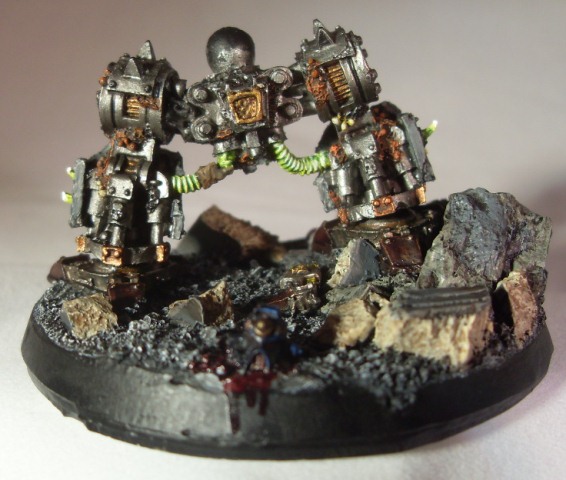 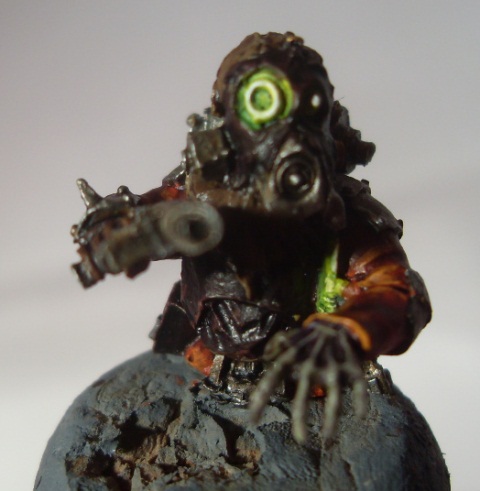 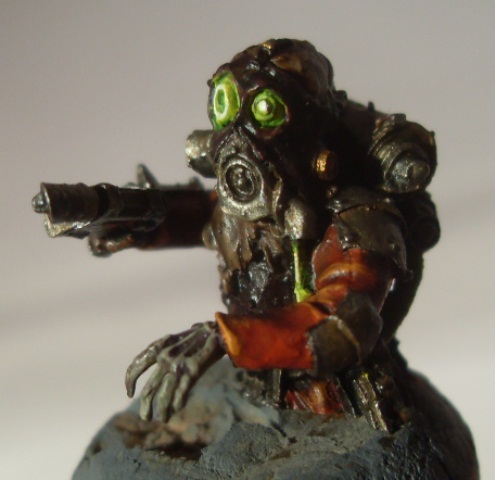 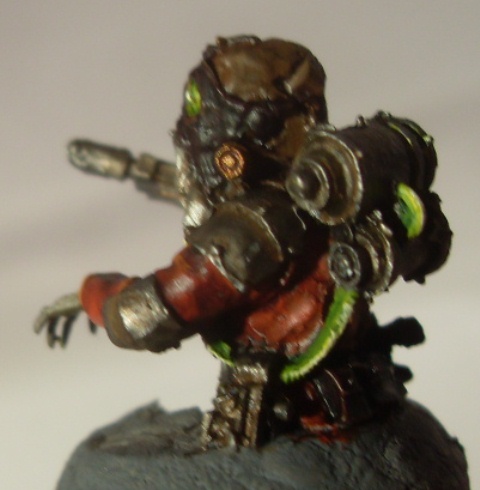 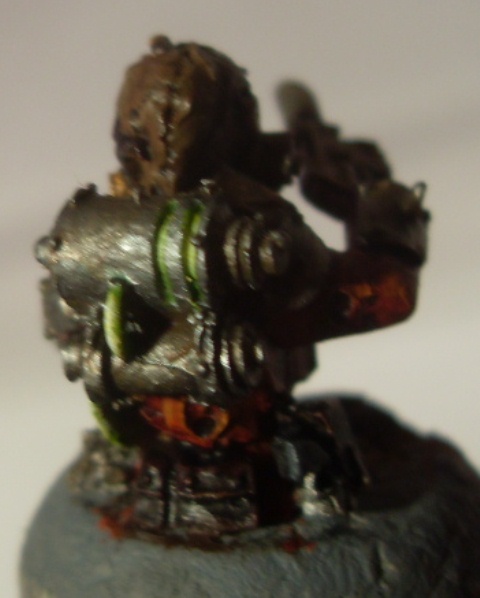 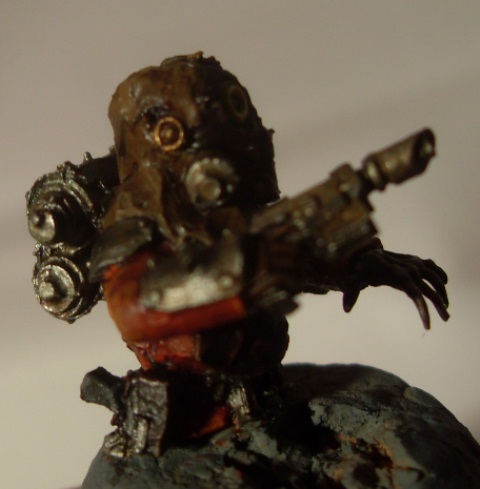 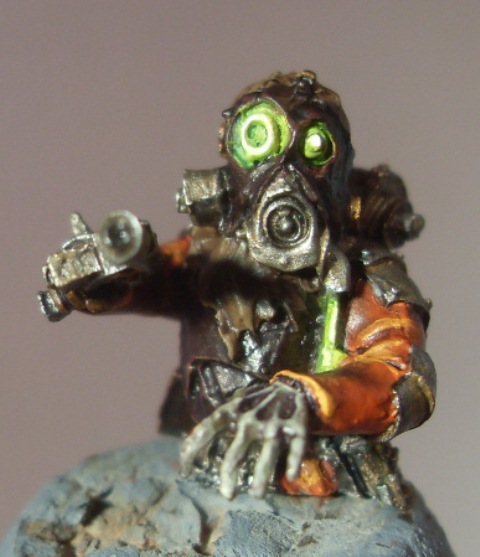