Here is my Heavy Machine Gun platoon for my Desert Brits. They painted up smoothly and look pretty good, though I am not happy at all with the lack of different poses within the sculpts for this unit.

They also have trucks to roll about in, but I've decided to leave painting any and all transport vehicles for this force to last thing and concentrate on getting all my infantry and gun teams painted first so I’ll (Hopefully) have everything I need to play ready for the next tournament on 14th March.


So now 5 platoons down and only 3 to go until my army is ready! Next up are my 6-pounder Portee Anti-tank trucks. Cool models, but lots of work as I have to paint both a "mounted" and dismounted version for each gun! To make this easier and less work, I have magnetised the guns and trucks and the bases so that all I'll have to do is pick up the gun from the truck when dismounted and plonk it on a base instead! Genius if you ask me. Right, right? Anyone? Beuller?

Here's where I'm at so far - the guns themselves are done (Aside from a little weathering to come.).
And last news for this post is that my Reaper Bones II kickstarter stuff arrived! (Like I needed more models to add to my paint queue.....) From some Hill Giants, to a cool arse dragon, a HUGE mealy-worm-thing and a sweet Gelatinous Cube - I am super happy with what I got and am already devising uses for all these minis in a D&D campaign I've been putting together for my rpg group.

Bit of a quick aside to keep from burning out on painting desert colouring, here the three miniatures that will represent my generals for my 15mm ACW Confederate army.

I have no idea who produces them or if they were even supposed to be Confederate Generals int he first place (As opposed to Union), but they are full of character and were fun to paint. 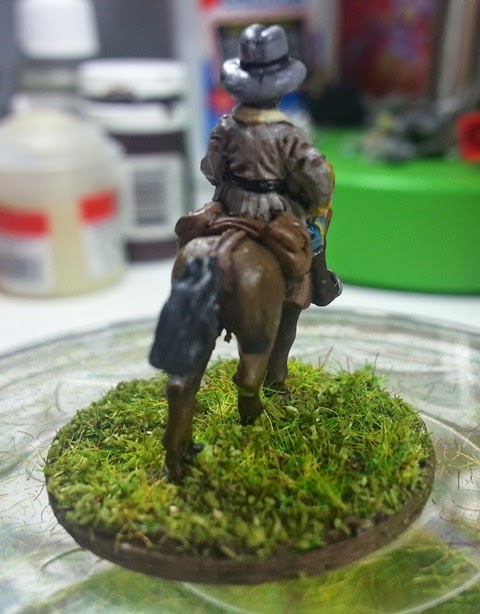 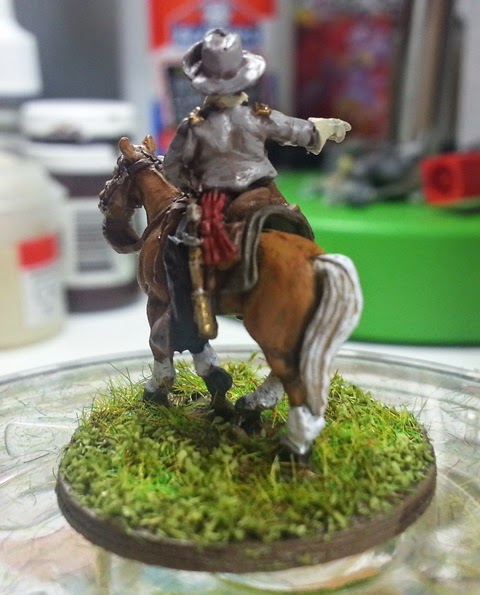 Also got the last of the KingForce Chuchills done! Commander is painted the same method as my other infantry, but the lighting makes him look a lot darker skinned than he actually is. With him done, I've finished painting half my platoons for my Desert Brits, well on target for the next tournament March 23rd (or 14th or whenever that weekend is...). Next up will be my Heavy Machine Gunners! 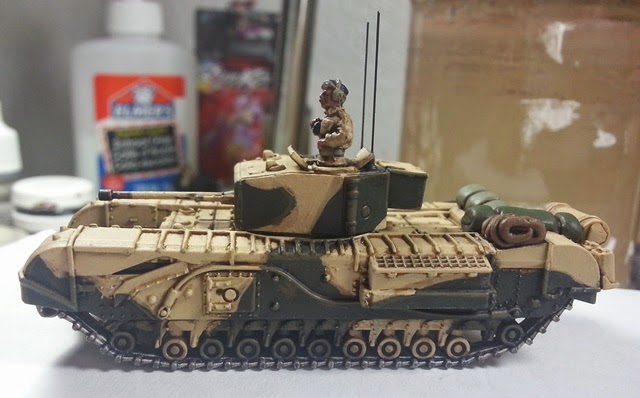 And here's the platoon all together. 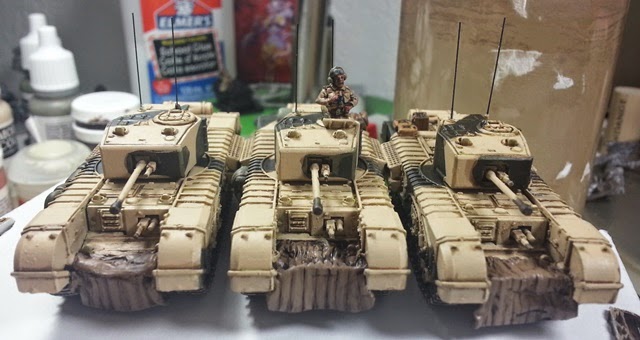 King Force (Part 2 - Two down and something in the air)

More for my Desert Brits – a second King Force Churchill tank and an RAF Hurricane Mk iiB (This one sports Machine Guns and Bombs ingame, but I left the bombs off the model as I felt they made it look too clunky.).

The plane was loads of fun to paint and took me far less time than I’d at first anticipated. The only time swallowing aspect of it all were the decals. They were obviously quite old and so took yonks to lift off from the paper. Regardless, they went on well and after a coat of first gloss, then matt varnish, I have my air cover.

The Churchill is more of the same from my last post, except this one has different stowage across it’s rear quarters. Again, fun to paint and only the weathering to be done that I’ll get to once all three tanks are finished.

King Force was a unit of 6 Churchill Mark iii British Infantry support tanks that were sent over to North Africa in October 1942 under the command of Major Norris King and deployed within the 7th Motor Brigade. This was the Commonwealth's first time trying out Churchill tanks in action since the failed Raid on Dieppe in August of the same year. Unlike in Dieppe, King's Churchills performed admirably and proved very durable against German Anti-tank fire and although they were deemed too slow to join in chasing Rommel into Tunisia, their example lead to the Churchill seeing service through the rest of the war and beyond.

In my Mid War Flames of War Motor Company list for North Africa I am able to field two platoons of these. (One with 2 tanks, the other a full 3.) But they are super expensive points-wise, so I've stuck to the one platoon of 3 tanks in my 1650 list. (This is the points level for the next tournament I intend to attend next month) In Mid-War desert, they are only really afraid of Pak40's, Semoventes, 8.8" Flak36's and Panzerfausts - and even then they have a fair chance at saving when hit by AT rounds.

Modelling-wise, mine are by The Plastic Soldier Company and were a great kit to put together with crisp detail and (mostly) clear instructions. As you can see in the picture above, I've also attempted to model the canvas "screen dodger" across the front that was utilised to deal with the mass amount of dust and sand that would get thrown up and into the driver's face as the tanks rumbled on through the desert. It wasn't a very good solution to the issue and post 2nd Battle of El Alamein the crews instead resorted to removing the front fenders altogether which proved a far more successful fix. (Hence why supposedly most pictures of any Churchills in Tunisia are seen sans front fenders - though I've not researched this bit very much to date.)

Here is the first of my squadron - done aside from some weathering and dust to be added. Another thing I researched was the almost total lack of unit markings on these. Aside from a strange and otherwise little accounted for a tiny "Cluster of black grapes" symbol on their front right/back left fender Kingforce Churchills supposedly had no other Regimental markings. I neglected to add this onto my tank as what little I've seen of the grape marking are that they are tiny and I really don't have the patience to try to replicate the look.

For those interested, here's a small comparison of the Churchill next to a Crusader iii tank to give a sense of the size.

I'll hopefully have the 2nd and 3rd tanks of the platoon finished by the weekend.

*Which, btw also signals the start of the 2015 Six Nations Rugby Tournament! Wales versus England will be the 1st game and I am pumped! Cymru am Byth!*
Posted by Dai at 15:52 10 comments: