For my Winter Germans, I slapped on some colour to these three frigid fellows.

First up, the Sergeant sculpt for my Winter Heer squad, pointing out where the direction that the dastardly Ivans are reportedly coming from. Lots of fun detail to this bloke, my fav’s being that his helmet has been stashed at his belt and his winter-goggles are still strapped about it. He’s also looking down the length of his nose, like some superiority-complex’d twat – perfect for an unpleasant bully of an NCO.

The model is by Warlord Games and is actually supposed to be the Officer's adjutant, but I liked him better as my Grenadier Squad's sergeant. 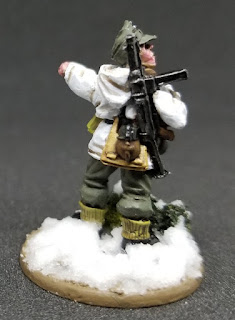 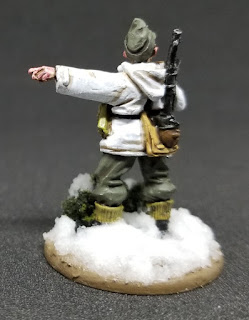 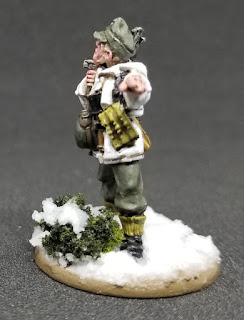 This Panzershreck team (Also by Warlord Games) was mostly simple to paint as a majority of both figs were made up of their bulky Winter greatcoats which were rather swift to paint up. Nice sculpts, though getting that 'Schreck face protector thingie to glue on straight was a bit of a pain. 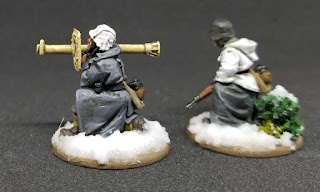 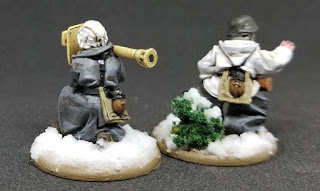 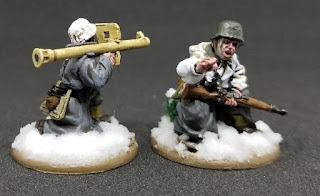 With these three done, I've moved on to another tiny part of my Winter German army, their medic. Warlord Games' sculpt for a Winter theater medic is a lovely fig, propping up some poor fellow who's been injured somehow. On top of that, I've also plonked down on a 50/60mm (Can't rightly remember) round mdf base the free fig (Also of one German trooper seeing to his comrade) that was free with purchases of the physical 2nd Edition. But seeing as I picked up the Kindle version of the book I never got to have this cool mini - that is until, the estimable Admiral Drax was kind enough to post me one and I saw immediately upon receipt that it would make for a perfect centerpiece in my game-table objectives collection! 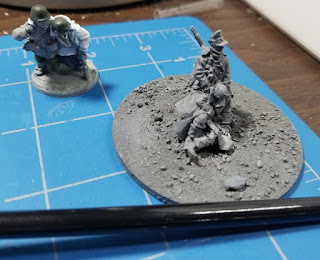 And lastly, I also started slapping the beginning layers onto the Sd.Kfz. 251/1 Ausf D half-track that will be the transport option for my previously previewed SS Grenadiers squad.

Painting did not happen this past week, again. But that’s okay as I did get some construction, basing and priming finished on some upcoming projects namely:

1.       Beast of Nurgle
This fun looking critter is Games Workshop’s latest version of the daemon and the first as a plastic kit with a few options for personalization. Neither simple nor difficult to build, the instructions were the only reason I found this taking a bit longer to construct  than I’d anticipated. But the finished product, wow. Just a well-designed model kit and with the left over bits, I think I will try my hand at some sculpting with air-dry clay to see if I can’t make him a pal to give me two for any future WH40K Daemons list that I might try out using the current 8th Edition rules (That I recently got a hold of.).

2.       Volksgrenadier
I realized that I can’t stand the Warlord plastic Grenadier sculpts and that their metal sculpts are so much more fun to paint and full of character in contrast (Think I’ve mentioned as much somewhere before?). So I gave my left over plastics to Densmol so he can build even more Krauts for me to mow down. Instead, I bought Warlord Games’ Volksgrenadier Squad and spent time prepping them for primer (They are now drying post-prime). Bit dressed down for the depths of Winter I guess, but they’ll do for some inexperienced level fun.

3.       Objective Markers
I ordered some VERY affordable 40mm round mdf bases from a Spanish-based Ebay seller that arrived quite quickly and used some of them as bases for some old resin Chain of Command objective markers that were a kind gift some time ago from Stew. Still debating whether I should Winterise the things or leave them as generic as possible so I can use them in multiple theaters? Opinions on this are welcome. Notice the 5th one with the German duo – another kind gift from the good Admiral Drax. Excited to paint this one and it will end up being done in a Winter theme.

4.       Lights, Camera, Action!
After seeing some of my fellow bloggers’ super well done pics using ultra-affordable portable lightboxes, I decided to get one for m’self. And low and behold, it makes my own figs look better in pics too, AND, it’s easy to set up and store and takes up little space even when left set up, so I will be using the thing from here on in to show off my painted goodies for you all to peruse.


Hoping to get some stuff painted up this week for sure, so next post should hopefully be a bit more interesting for you!
Posted by Dai at 15:50 30 comments: