Here's the spotter mini I painted up for my Soviets, primarily for my Medium Mortar team but also can alternately be used should I include Off-Table artillery in my army list.

As with my previously previewed sniper team, I've tried to illustrate the length of time he's been sat in one spot observing and calculating coordinates to his Mortar team by adding some snow fall here and there. He also has an entrenchment tool that I imagined he used briefly to help create the tiny snow mound that he's hidden behind.


Last night I worked a little more on the Inexperienced rifle squad - trying to paint these a little less "rag-tag" in their uniform colours as I imagine them to be fresh from the quartermaster and outfitted with new togs.

And lastly added a bit more green to these two on spots I'd missed previously. Bit silly really seeing as I'm just going to add whitewash over the top, oh well. :) 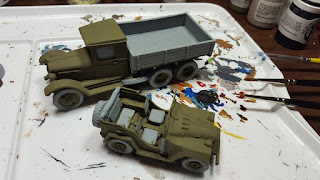 
Here’s the Tank Riders squad from my Bolt Action Soviets, as mentioned in my last post the squad has been bumped up to 10-men to include a Light Machine-Gun and required loader person, all the other squad members are veterans with SMG's (Small Machine Guns).

Rumbling up on the back of a tank, these guys will hopefully jump into the grill of their enemy to provide a great assaulting option ingame.

Intended to get started painting on the 3rd and final infantry squad of my army last night, got out the green to start on the helmets, which of course was unbeknownst to me clogged and consequently spooged all over the place. So as not to waste the precious paint I proceeded to paint the helmets as planned, then base coat the Gaz-67 (Russian Jeep), Maxim Machine Gun, ZIS-6 truck and ZIS-3 Anti-tank gun. Amazing how far some spilled paint will go!

Forgot to bring out my freshly painted Mortar team spotter when taking the pics above, so will give him his own post in a couple days.

Things in real life have been bloody murder so energy for hobby has been difficult to muster. Between my marriage heading to divorce, telling our son of impending divorce, my 40th birthday slowly but steadily heading my way and my Grandmother's passing earlier this month I'm calling 2016 a right bag of shite and and I'll be happy to see the back of it.

But I digress, here's the remaining three Tank Rider infantry for my Bolt Action Soviets. Crap pics as they were done last thing before bed yesterday and prior to a spray of dulcote, so please be assured that I will post the whole squad in a group shot in the next couple days and do a better, proper post for them. After reading the new Bolt Action 2nd Edition rules, I found that I wanted more Light Machine Guns (LMG) to support my army as a whole, but also to keep it more thematic ingame. This meant a quick re-arranging of my planned 1000 point army list and so now my previously painted Flame-Thrower team has been set aside to bump up my Tank Rider squad to 10-men and include the squad’s LMG and loader.

Once again, these are Warlord Games’ plastic Winter Soviet infantry – a very well designed kit that paints up pretty easily. [I also completed a spotter fig for my mortar team, but he’ll get previewed next post as his snow effects weren’t yet dry when I was taking pics last night]

The 6MMRPC challenge that I'd joined to help lessen my mountain of unpainted stuff and pledge to not buy new models has started again for it's 3rd iteration (I think?), though this time only for 3 months so the challenge won't interfere with the end of year Xmas celebrations, etc. Perhaps that will get me painting again? Roll on the 3MMRPC!
Posted by Dai at 12:06 16 comments:

Feeling a little more enthusiastic to get stuff painted for this army what with my copy of the Bolt Action 2nd Edition rules apparently on their way to my house. All previews of new or changed rules really sound like they'll make the game more fun, so hopefully I'll actually have these snowy boys finished up well before the end of the year!

Only two members of the SMG squad left to paint up, though with LMG's getting a nice boost in the new rules, think I'll be picking up another couple of figs to add to the squad for a little longer range support as they advance to assault!
Posted by Dai at 10:04 23 comments:

Whilst painting has slowly been continuing on my Winter Soviets, I need to take a quick break from batch painting uniforms (Especially after the recent bunch of 15mm Confederates) and decided to jump on the Oldhammer bandwagon a bit.

These are some old minis I've had since my earliest days of gaming, some Citadel Miniatures Chaos Hounds and a Dark Elf Beast Handler. They were done pretty fast and dirty and being Chaos I wanted to make each very different from the other which made them a lot of fun to work on as well. 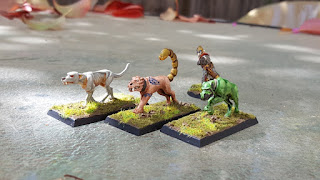 The battle report for my previously mentioned Regimental Fire and Fury game will go up sometime this week. I think.