Only a little hobbying to show since last post.

I built the KV-1/2 kit I get as part of my prize from the Stalingrad event  I went to on the 21st. It was a relatively simple model to put together and I really love the fact that it comes with two distinct different turrets for the chassis so you can make either the standard KV-1, or the crazy top-heavy looking KV-2. (Differences between the two - the KV-1 mounted a medium anti-tank gun, whilst the KV-2 had a scary arsed Heavy Howitzer!)

Just a pic of the build so far. The only real fiddly bits were the two tiny machinegun barrels (One on the hull as pictured and another on the rear of each turret) that were hard to handle without getting one's fingers glued up.

I also was excited to see this new shiny thing arrive in my postbox on Saturday! This is a new game put out by Andy Hobday, who seems a jolly nice bloke. Along with this new starter set, the Gangs of War game in general seems to be very well supported with lots of free to download scenarios that can take new players beyond the one in the box. I really like how it's a really small scale game (So only a handful of minis each that need to be painted!) and after a quick scan through the rules, seems very straight forward to learn. This set also was a steal as it includes a beautiful Temple to Apollo in mid-construction (By Sarissa Design.). I've begun gluing it together, though there's not much to look at so far, so instead, here is a derpy picture of me and my acquisition from the weekend.

In my last post, I briefly described a very funny (At the time) moment during the Stalingrad event where my team-mate, Tony sent in from reserve his Ampulet team up a sewerage canal on an inflatable dingy. Well, here's a pic he took of said team! Bloody ridiculous and we all (German player aside) had a good laugh over it! 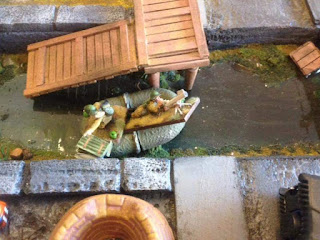 Last night I had a wee bit of time to slap a little paint on a couple of my zombie collection to cleanse the pallet sotospeak after painting so much WW2 uniforms, so next post they should be finished and ready to show off - watch this space!
Posted by Dai at 11:29 25 comments: