Got inspired to paint shortly prior to midnight last night. In the end decided to slap some whitewash on my Lend Lease Soviet M3 Half-Track so it’d match better with the rest of my Winter project. Also got the chipping/weathering done as well, just mud and snow to go then a quick coat of dulcote and this lovely model is done. 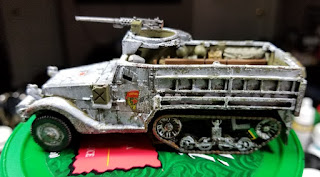 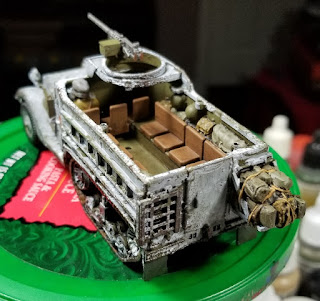 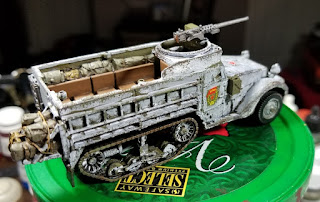 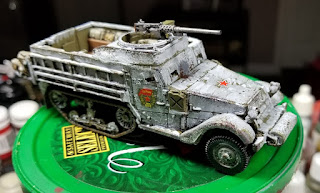 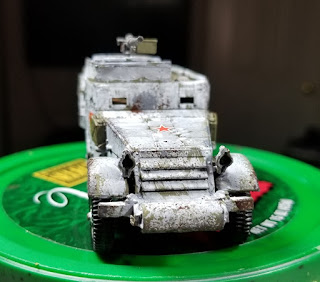 The Griffon is as done as it’s going to get. Not my best work, but it’s off the unpainted mountain so that is something at least. It’ll do for tabletop and rpg gaming I think. 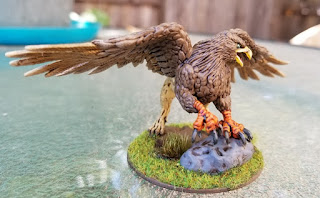 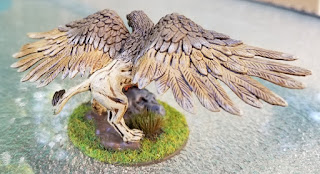 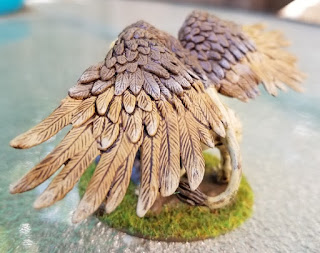 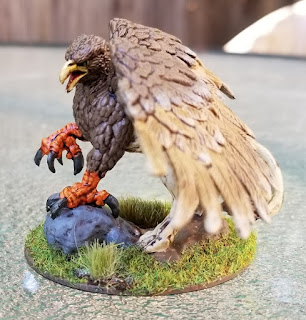 After being low on painting mojo for a couple weeks, this weekend saw my mojo return with aplomb!

Whilst I only managed to get a small scatter terrain piece fully painted, I did get work done on other stuff too, including a secret project for a mate that I'll preview later after he's got it in hand.

First up, my WW2 Soviet Lend Lease M3 Half-Track (By Blitzkrieg Miniatures) has all of it's base green/wash/green+details stuff done. Now just weathering and markings to go. Not sure I'll be white-washing this one up to add a little variance amongst the schemes on my WW2 Soviet vehicles, though it will get the same snow and mud treatment as my other vehicles.

Next is this nifty little resin wall. It was a cool and very affordable find in the bargain area at my LGS and was simple to paint up. The sculpt had quite a few bubbles but nothing so bad that couldn't be covered up by the moss effects and dark colours painted on and I've no idea who produces the piece. Nothing fancy, just good enough for slapping on the table - one can never have too much scatter terrain afterall.

Lastly, after my last post on the Dragon Rampant game my son and I played, I felt the urge to work on something "fantasy" to add to our next game together - so here's a Griffon. It's made by Wizkids in their new pre-primed plastic range that is far too affordable that I'm assuming was created to compete with the Reaper Bones plastic range. (Which if they keep charging a mere $3-4 for each pack, they'll quickly out-price Reaper.) The sculpt is very crisp and dynamic, obviously a CAD effort, but has some very obvious mold lines (That I couldn't be arsed to try to remove for fear of losing detail.) that make for a good gaming piece, but not so good for those who cringe at such blemishes in a model. So far just base coat and wash, still simple highlights and detailing to go plus some basing. I have some more of these pre-primed fantasy sculpts that I'll be painting up in the future.

Not been in the mood to paint this past week so no updates for you on that, but I did manage to get in a game of Dragon Rampant in with my boy.
Bit of cheap narrative for you and then some pics of the game with the odd descriptor. :)

“And lo, the lands were awash with death. Crops withered, livestock took ill and the very life within the soil leeched away. Evil magic pollutes the very air and some say that the bodies of those recently laid to rest in the furthest-most settlements have risen from their graves, even attacking their own family members.
The Liche Wizard Roogarbito has escaped his 200 year imprisonment beneath Mount Pickle and has gathered a great undead host to wreck vengeance upon the descendants of those who left his body to rot. He marches with his unliving host toward the last great human city of Hook after already defeating the gathered armies of the nation of man.
Last remaining Lord of Man, Prince Erik, has received a report from his few remaining scouts that the evil Liche travels at the rear of his army and could be vulnerable to attack by a determined small strike force. Should he be brought down, then Prince Erik’s seers assure him that the dark magics holding together the massive undead host shall surely disappear and the threat to the living be vanquished!”

My son played the Liche and his Undead bodyguards – a unit of Skeleton Soldiers, Zombies (Held off table to be summoned in-game) and some Armoured Wights (Using Vampire rules).
I in turn played the humans using the “Northmen” army listings. Prince Erik (Chieftain), Two units of Thegns (Bellicose foot) and a Giant, who we decided was a merc of sorts that the Prince had convinced to help him out with promises of loot.

Enjoy the pics (And apologies if they come out huge, for some reason my cruddy home laptop had no way to reduce their size. I think I need to invest in MS Office :( )! 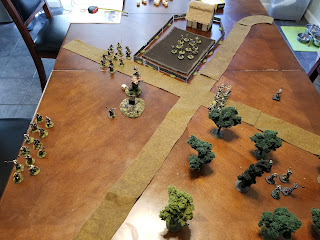 My son played the game very well. He expected the zombies to do better, but really zombies are just a speed bump in this rules set. Keeping the Liche back and using his ranged attack just about every turn was perfect tactics and my humans suffered by not having any ranged attacks to shoot themselves. (He managed to roll the 7+ activation roll to shoot 9 turns in a row!!!)

Next game we play, he has decided that he wants to play the part of the humans, so now I'll have to get painting on some new fantasy figs!
Posted by Dai at 10:57 19 comments:

Spawn of Cthulhu - Chip off the old block

This is a post to showcase my son's recent painting! :) I'll be posting more of his stuff as I remember to take pics.

At 12, it seems that the coolest stuff apparently needs to involve poo and farts and rot and zombies and horror influences. This meant by son was overjoyed when he received this Reaper Miniatures Eldritch Demon as he is also a firm fan of the images of the Great Cthulhu.

I'm lucky in that we are able to paint standing side-by-side at my tall painting station, which makes for some really good bonding time. In two good sessions, the young man churned this tentacled beastie out with an ample usage of washes over a base-coat and swift dry-brush. This mini is quite large as well, about twice the size of a "human-sized" 28mm fig, so I was rather impressed when he declared it done. (I think I will be borrowing it to represent something nasty in one of my future roleplay sessions. 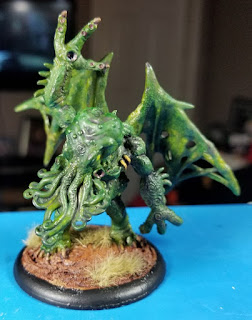 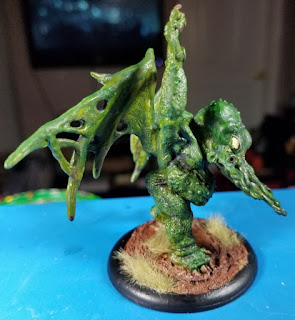 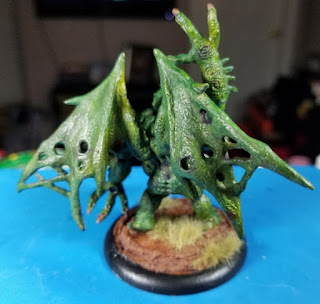 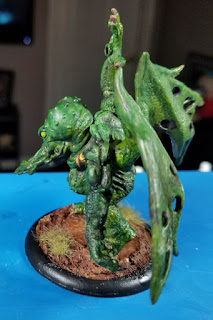