74 years ago, the largest amphibious landing in history commenced as hundreds of thousands of brave Allied military personnel landed on the shores of Normandy with the intention of pushing the German defenders out of France.

In 10 days, my local LGS (Ogre's Den in Orangevale, CA) is holding an event to commemorate D-Day and I intend to attend along with my good pal Densmol. As my own Bolt Action armies are unsuitable for Western Europe in early June I had to borrow an army from Densmol's growing Germans collection, so I'll be fielding some Regular Heer with some Inexperienced Kreigsmarine (Sailors), Strafbattalion (Military inmates) and a tonne of Light and Medium Machineguns to defend the Normandy beaches.

Densmol's collection though didn't extend far enough to fill out a full 1000 point list, so he purchased the Kreigsmarine and said that I'm welcome to include them, but I had to paint them up first along with a Captain (See below) and Medic.

Here I present to you my force's Captain - I included him in my list as I am all too sure that my poor squads are going to be suffering a LOT of bombardments early in the game and his extra command bonuses will help remove any pins that ensue. The model was a freebie included with an order from and is by Warlord Games. (Though I can't seem to find him on their website?) Nice one piece sculpt with a few annoying moldlines running right down the face of the sculpt, but otherwise a simple one to paint up. Because time is of the essence I didn't put too much effort into this one, but I think he looks like a good tabletop job. He'll be staying with Densmol after the event as a thankyou for lending me an army (again). 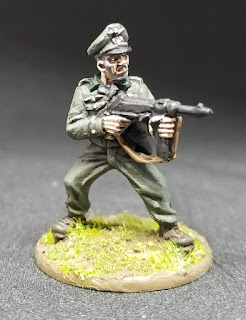 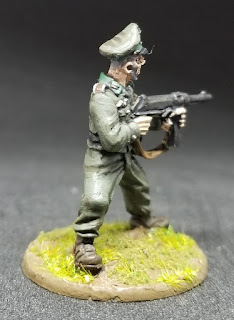 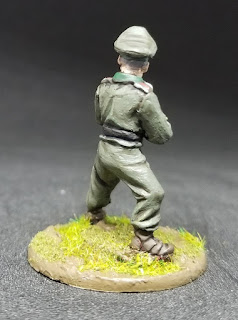 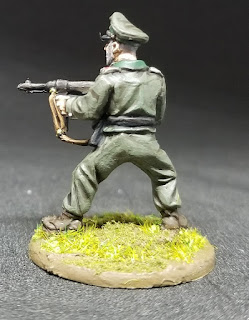 Please forgive the lighting in the pics, my tiny cheap photo box seems to only have one brightness setting and I've yet to work out a way to diffuse those LEDs. (I'm thinking perhaps a strip of wax paper?)

Next on the painting desk will be the Kreigsmarines. I've already blocked in 75% of there base colours, but so far they have been excellent sculpts to work with and have varied uniforms which will make painting them up for more enjoyable.
Posted by Dai at 13:00 32 comments: