This post brought to you by Pabst Blue Ribbon, my American beer of choice and the almost certain hangover it will deliver the day after.

(No kidding here folks, I really do prefer this over much else brewed over here. Not to say that it's better than my 1st choice beers, Stella Artois or Kronenbourg though.)

Yesterday was my birthday. Enough said about that. The reason I bring it up was because of the lovely gifts I received and of the wonderful hobby goodness contained therein.

1. Pegasus Hobbies Gothic church looking scenery boxed set: I am well happy to get this. The quality is fantastic and I fully aim to purchase the other sets they have available for my 2nd planned terrain board. Am thinking my 1st graveyard board needs a place of worship, right?

2. The new plastic Plaguebearers boxed set: as soon as I saw these I was hot for them. So much fun and sweet little details. Now I just need the Nurglings box and my Nurgle urges will be appeased.

3. Dark Vengeance boxed set: I consider myself bloody lucky to have the good friends that hang around my carcass. Dave was up for learning 40K after I convinced him 6th is a big step better than 5th (He had no interest in the last edition at all.) and so got me the starter set so we can try out 6th together. He's a good feller and needs to play more to boot.

4. Airbrush and Compressor: Yup, that's right, I made it into the 21st century. Now I only hope the thing isn't too tricky to learn how to use. No more do I have to anticipate trying to paint my Malcador Defender the hard way! ;)

That's it, a short post. There's (more) beer to drink, a movie watch with my lovely wife and yet another day off to anticipate and plan for. So far, best 3 days off in a long while. :)

Reading You Loud and Clear, Over.

“Ludo is a former Tech Ganger from one Hive World or another that singed on to join the 108th Expeditionary Fleet Corps. His knowledge of most things technology-based has helped him show that he is worth far more than a regular Guardsman. Commander Tholme, commanding officer of the 1st Platoon, 1st Battalion took note during a recent exercise against Kroot mercenaries as Ludo’s swift repair and well timed usage of his Vox Unit to bring in a timely airstrike and recommended that the trooper be awarded “Chosen Man” rank and stand as the Trader Prince’s personal Vox’man. From lowly Ganger to Company Command Squad, Ludo has risen far higher in station than he would ever have dreamt. Little does the youth realise, that he is the Trader’s 4th Vox’man this year…”

So here's another ancient Confrontation fig that I bought as a child. This is his second paint job, far better than his goopy first. Started his skin as a light grey and used some red inks and lightened with flesh-tones to hopefully make him look like he's lead a life of one who had never seen an actual "sun" much less get tanned by a sun's rays. 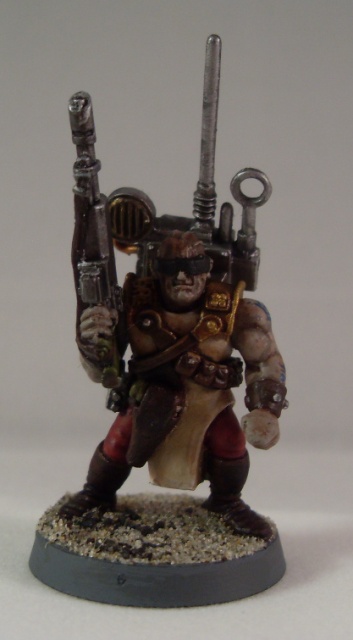 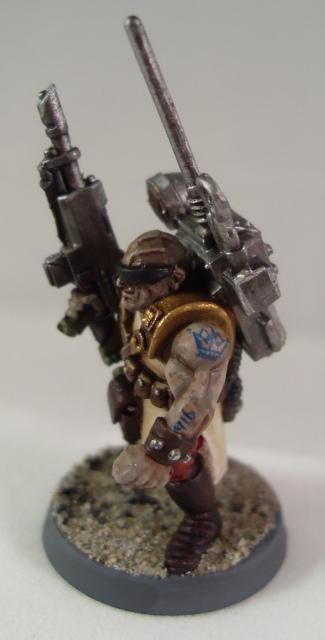 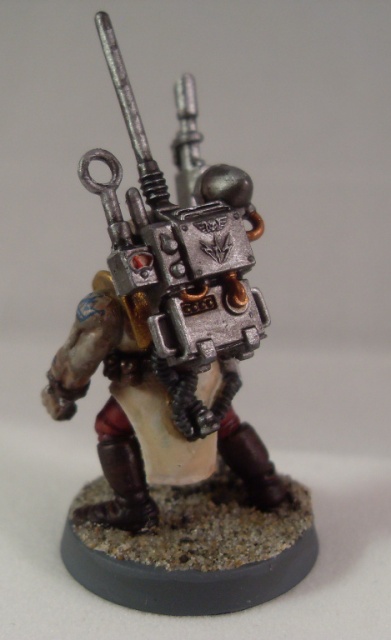 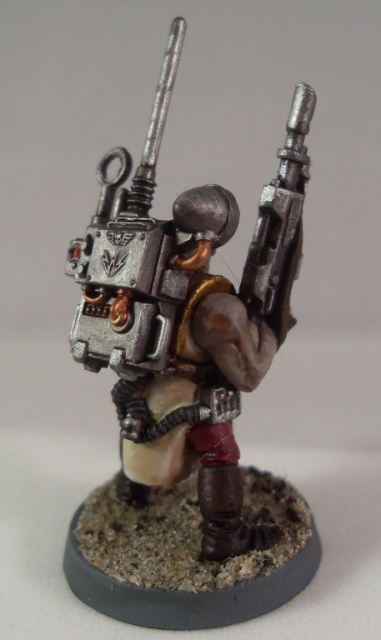 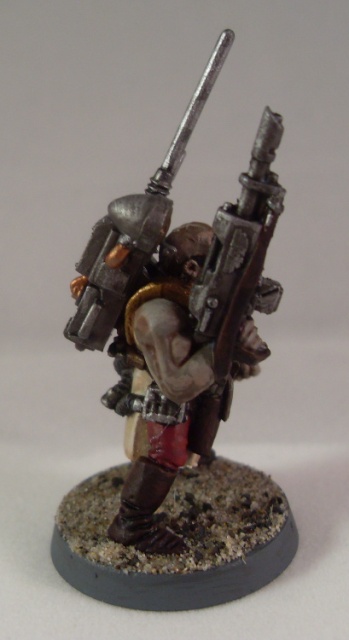 Finishing Ludo marks my Company Command Squad as completed! Am well happy with the results - yes, maybe could have put in a little more work here and there, but they are far better looking than I was expecting. I think I caught the right feel with these lot to effect a Rogue Trader's mixed-bag retinue.

The Trader and his advisors. 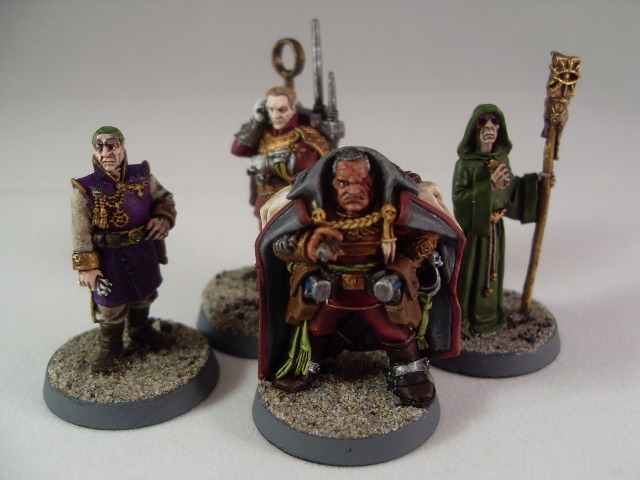 This time with his freaks. 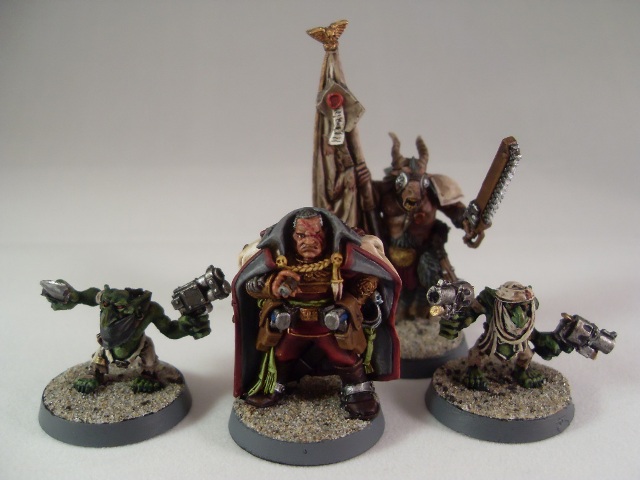 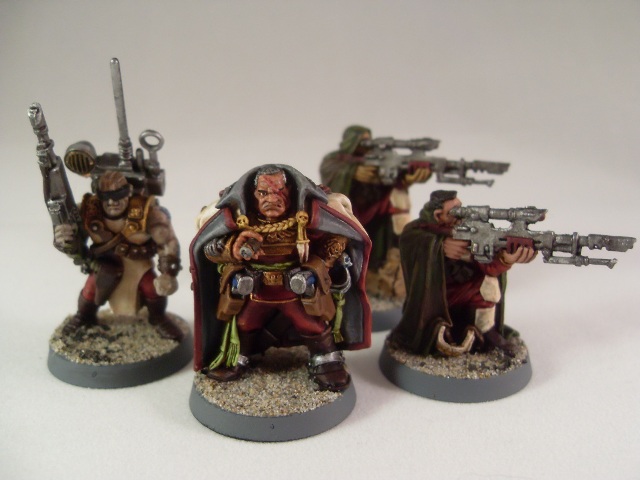 Trader Brothers, tho they show no love for each other. 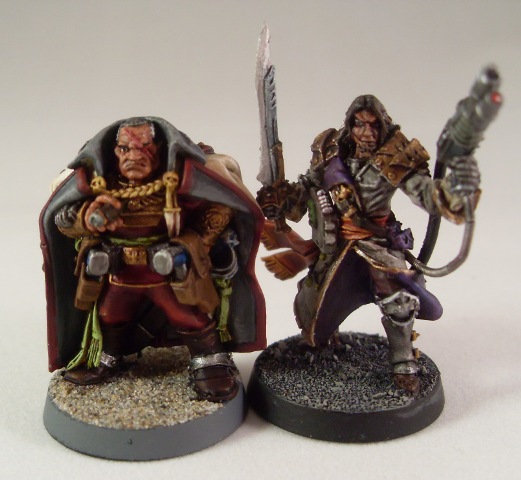 And as mentioned some posts back, I went and purchased four armoured cars from http://littlegreenmentoys.com/Tim-Mee-Tan-Armored-Car-02-0001.htm to convert some and have as my Chimeras for my armoured Infantry Platoon.


Just a quick mock-up of a basic set up for how these will turn out. Many super huge thanks to Col. Scipio for his kind gift of some Multi-Lasers (and Autocannons - these for my Squat Trikes, Sentinals counts-as.) which with some plasticard will end up looking great I think. The heavy flamers on the hull will also get some green stuffing to end up looking like some WW2 canvas style coaxial effect mounting thingie. Lastly, you don't need to tell me, those wheels have GOT to go. (sister) I have already found some replacement beefy wheels from Secret Weapon Miniatures and will order maybe next month.

The Science of Shouting

"I suppose describing a one-hundred and forty-seven year old man as being in the prime of his life would sound strange to most people. But they don't know Plutarco Etcheverria de Dios Otero Antormarchi. The man is a force of nature unto himself, driven with an energy pubescent boys can only dream of. What he dreams of, he plans out. What has been planned out (meticulously) he puts into action. What is already underway, he most certainly finishes and with an impressive efficiency.
Being the Lord Commander of the 104th Expeditionary Fleet on the outer reaches of the edges of Imperium Space, he has lead his fleet and ground forces to conquer and subjugate many lost planets and brought them into the Imperium's fold. He's Recovered mysterious Archiotec and discovered ancient Mechanicum devices long thought lost by the Adeptus mechanicus. All the while stamping his family crest upon new frontiers and profiting immensely from the proceeds - all in the name of the Imperium of Mankind."

Not great background as it was written rather swiftly at the end of my lunch break. i may go back and revise it some. This is my penultimate fig for a finished command squad and has me well excited. It's rare to finish a project, even though it's a small one.

I love the Creed sculpt. I think it's full of character and shows an Imperial Guard mob-boss looking leader. All he needs is a fedora and tommygun and he'd be ace! :)

Much like his younger brother (From my Inquisimunda Rogue Trader Crew - Antolio), he wears a sash, though coloured lime green as befits his own position as 4th son within their Trading house family. 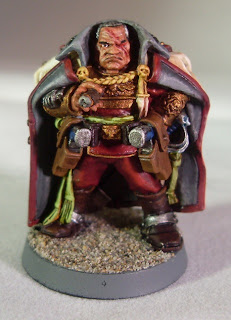 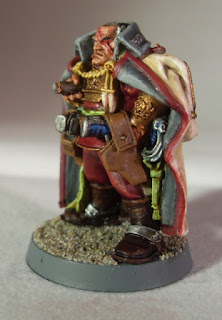 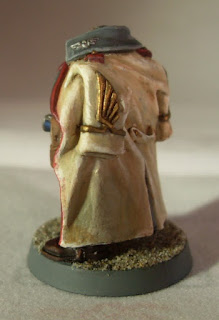 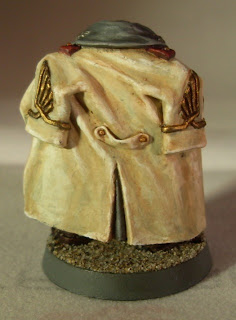 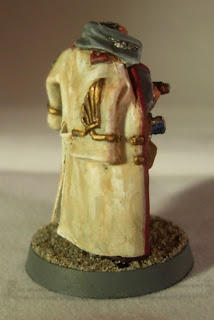 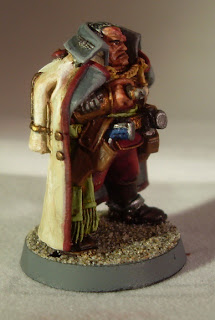 Tried hard to get his cigar to look like it's actually lit with ash-line, etc. 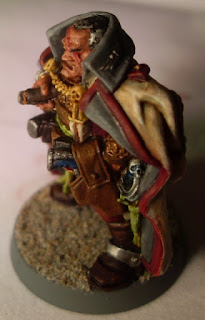 "Bombardier General Horatio Vanderbilt, as you can see, is a man who pays the most attention to detail. His precision orbital bombardments and long range artillery strikes have kept him in his position for the past fourteen years and he remains the longest serving Officer in the Trader Prince's Guard forces.
The Bombardier General wasn't always such an adherent to detail. Prior to his earning rank within the Bombardier branch, he was Specialist Vanderbilt in the then 2nd Company, 4th Platoon's Command squad. Toting his plasma gun, he had a reputation for recklessly laying about himself  regardless of friendly fire consequences, though, getting the job done nonetheless. That is, until the sack of the Spartanites of Planet 108.009.112, where after heating up his plasma coils one time too many, they burst and severely charred his face, chest and hands to the point where a total facial transplant was required to save his features and a severe skin graft from his hind quarters needed to replace lost skin on his hands. He also required a full ocular replacement procedure and still sports the glowing green emergency orbs implanted within him all those fourteen years ago.
The experience had taught the soldier a valuable lesson about recklessness and he quickly reformed his views on how to conduct war. Since his recovery, he has proven year after year that his attention to detail is worthwhile and required on the field of battle and his now rank of Bombardier General more than speaks volumes of the Rogue Trader's trust in the man and soldier Horatio has become."

Once again, my fickle "hobby sense" took over as I tried to work on some Raven Guard Space Marines and this figure grabbed me by the short and curlies. Next thing I knew, he was sat and ready for a spray of matt finish varnish. Note the white dress gloves he is known for wearing whilst out in public to hide the horrific scars from the plasma burns and expressionless face following the transplant.

All that's left of the Company Command Squad to complete is the Vox Caster and the Commander (Creed) himself. Yay! 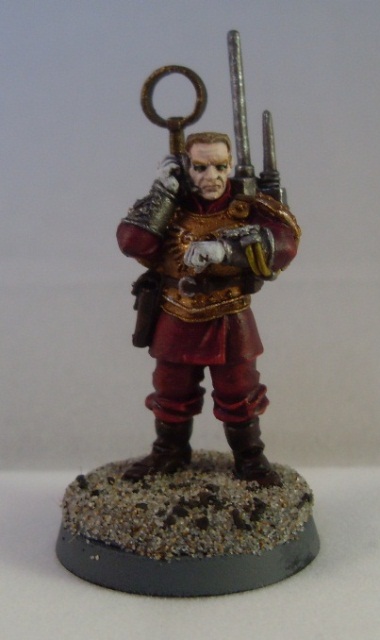 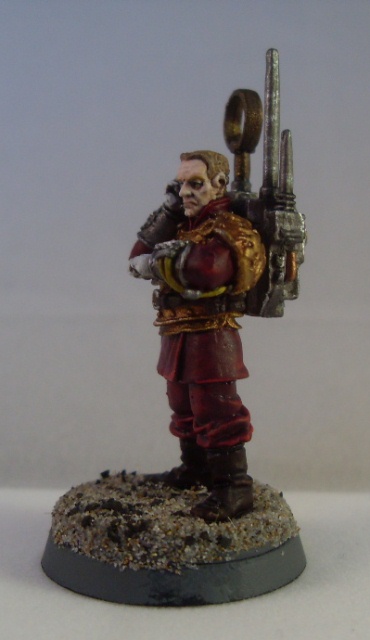 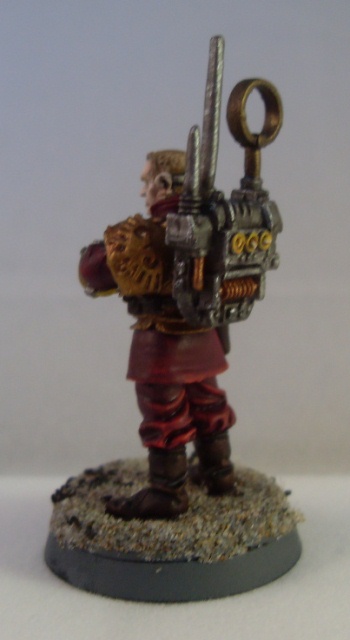 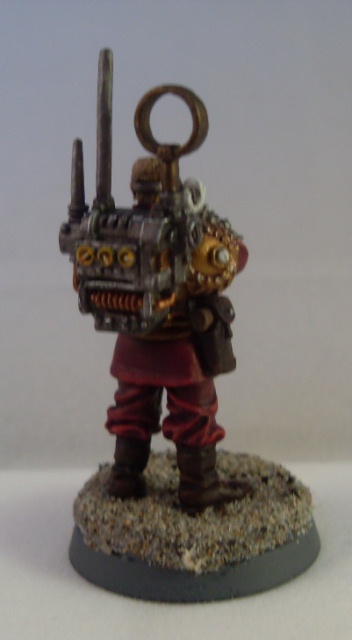 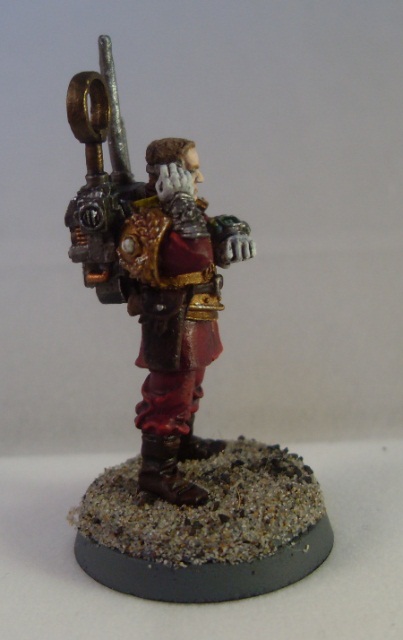 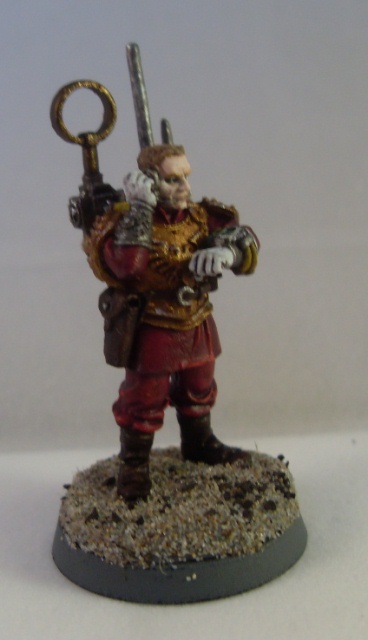 A wee pic showing his digi-readout-wrist-thingie. 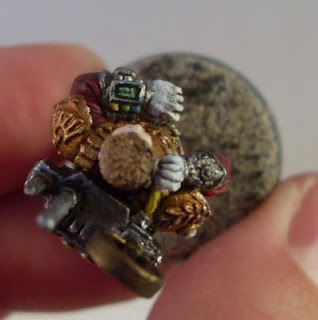 And a bit of a closeup to show his face and eyes. 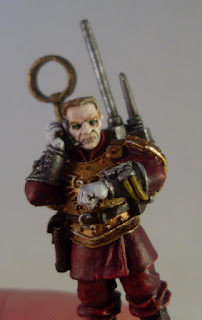 O and..... Admiral Drax might be surprised to see these. A mate has had me join his gaming group. I am so weak.

Late War British Guard. I plan to make a Hell's Highway Parachute list from US and Brit units that I can use in the upcoming starter set.
Posted by Dai at 16:35 9 comments:

Today is this blog's anniversary I believe. I also passed the 9000 views mark.

Not bad for my lazy arsed self.

Just a quick post to say thanks for coming by, offering advice and being a general all round encouraging bunch. Being the antisocial jerk that I am, it's nice to know my hobby offerings can be presented before you lot and get some fair responses.

So applaud yourself, cos I wouldn't have kept up with this otherwise. Thank you.

I managed to keep my New Years Resolution as well, having 65 total posts and so averaging more than one post a week. I call that progress folks. (You can call is modesty.)

Hopefully in the near future I'll have something exciting to post up included but not restricted to:

1. I've stuck all the RT Guard troopers on their bases aside from Heavy Weapons Squads (I have no 60mm bases - anyone know of a super cheap resource for these?). Heads will be next, then it's time to prime.

2. Creed, his Vox 'porter, the three Plague Marines are all getting wee spots of paint, though still far from done.

3. The big Mutie from the Nurgle Chaos Coven for my Inquisimunda campaign is near complete. Somehow found some enthusiasm for the model, which is nice considering it's been a hard slog to want to paint this up until now.

4. After jumping on the Dreamforge Kickstarter, I find myself now with the impending delivery of a further bunch of miniatures (Couldn't resist, they looked so darn good.) and who knows, I may well dive into the game too once the rules are released.

5. A pal of mine has been asking me to get on board with his Flames of War group. I plan to make my first attendance (For any game in a few years since Warmachine 1.0) on the 12th to see if I like it. If it grabs my attention, then I guess for my birthday (the 20th of this month.) I think I may well put some funds into that new starter set to get a British force going. We'll see though.