Today would have been my Grandfather's 89th birthday.

Tomorrow will be my Grandmother's 89th birthday.

For those who are paying attention, yes, you're correct, my Grandparents (On my Mother's side) were born a day apart - 31st December and 1st of January of 1926. It's astounding they ever met at all considering My Grandfather was born in the Rhondda Valley, Wales and my Grandmother in Southern Greece. But to both meet AND fall in love during the horrors of World War II is (in my mind) near miraculous. Once Greece had been finally liberated from the Germans and Italians, my Grandfather (At that time still an RAF Armourer) returned to court and then marry the beautiful Greek girl he had chanced to meet the first time the British Commonwealth forces attempted to wrest control of Greece from the Axis forces.

There's far more to the story, but I'll leave it there. My Grandfather was the man I admired most in my life and I felt it was fitting to honour his birthday here.

Now to some Hobby stuff!

Only a little work going on. For the upcoming tournament next month (24th) I have started to paint my 3rd infantry platoon for my Flames of War British. These are handy as they can be used both in Mid and Late War. So far though, I've only gotten paint on their helmets and faces, so not worth posting a picture as yet.

I also managed to get some painting on the Robotech Veritech Jet forms. Stupidly didn't make sure the pics of one came out before I left for work though, so only the one that represents my character in the game. Guardian and Robot forms to come! 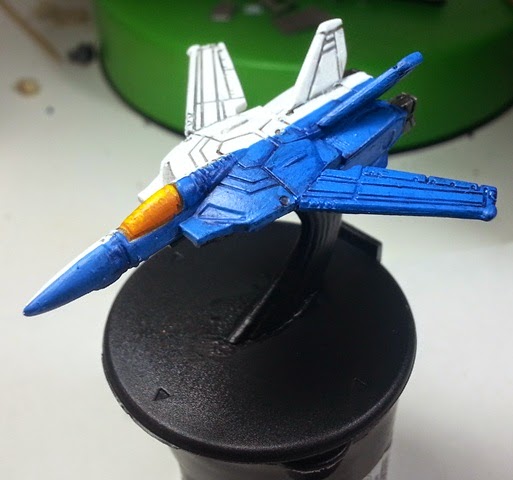 I also stuck my ACW Confederate cavalry on sticks, ready for paint. They are currently in the garage with grey primer drying.

I hope you all have pleasant and safe New Year's celebrations tonight (Or already have if it's New Year already where you are.)!

Xmas is over and I'm back to work. Bottomless Mimosas (Bucksfizz to you Brits), huge turkey dinner and sleep deprivation (Due to my son waking us up at some ungodly hour to see what Santa had left him.) saw me out for the count and snoring around 5pm. Sad, but it also meant I got to dodge my in-laws visiting, so not all bad. Heh.

Hobby gifts were a little sparse - I got another set of magnifying lenses for my perfect-up-close-eyes and a pair of Flames of War Sherman Crab Mineflail tanks that looked like they'd sat on some shop shelves for a long time; so much so that the blister packs were cracked and a load of pieces were missing! Email sent to the seller to see what can be resolved.... ~_~

I got a little painting done. The Heroquest Sorcerer finally got the love he was promised. Being that he's going to be used as some sort of Death Cult Evil Priest type, I went with attempting a blue-grey skin colour and the requisite red (= evil for sure) tabard. The orb thing between his horns I painted similarly to the orb that my Necromancer is holding to key in so everyone can work out who's side they're on.


And lastly, I got to finishing up the pre-primer basing on some random fantasy minis that I found and have added to my mass of rpg minis waiting for paint.

Not much hobby of late with the run up to Xmas.

I did work some more on Robotech Tactics Veritechs and have all but one Jet mode model assembled and ready for primer, so expect some paint progress pics hopefully in a week.

Also, I crumbled and used one of my 6MMRPC two Joker slots and picked up a 15mm Confederate cavalry regiment for use in a Regimental Fire and Fury project I've started up with a mate who recently moved to the Sacramento area so this will be my new thing for 2015!

Hope all have a safe and pleasant time with your loved ones this Holiday. I hope Santa graces your stockings with muchos hobby goodness.

British Pioneer (Non-paratroop mind) platoons in Mid & Late War Flames of War are tiny four-stand affairs mounted in jeeps with trailers. They are cheap, so sometimes can fill in when you've got points left over in a list, but typically there's usually better options out there. Saying that, they still have the ability to get rid of pesky barbed wire and minefields and can also scare tanks away from assaulting them with their AT4 in assaults.

This is a platoon that will not see much time on my playing surfaces seeing as my regular opponent has yet to use fortifications, minefields or barbed wire, but the first tournament of 2015 is a small Infantry companies only 1200 point effort and I found they were all I could fit in to my list. Battlefront's own Brit Pioneer sculpts are more for their Italy Campaign line, and so I decided to look elsewhere as I wanted mine to fit in with my current Late War Canadians who are based around a Western Europe theme. Peter Pig Miniatures had a wee pack of their own Pioneers and whilst a little smaller than Battlefront's sculpts, seemed to fit in and give enough character to my stands that they couldn't be confused with regular infantry.


Next up for these blokes will be their Jeeps and a 15CWT Truck, but I'm still waiting for those to arrive in the post.
Posted by Dai at 11:26 12 comments:

Saying that, I have gotten out of my slump and been painting lots this weekend, which is refreshing.

Here are the infantry stands for my 8th Army HQ. I honestly thought painting desert infantry would be easier (When compared to painting Western European Brit uniforms) prior to beginning these fellows, but they require about the same amount of effort. The one part that was easier was the basing. I used some grainy texture paste stuff by Liquitex and some Silfor grass tufts and I think it looks pretty good.

The transport vehicles for this lot are being worked on next and as you’ll see below, I’ve even stuck a spare dog in to further differentiate the White’s Scout Car as the 1iC’s personal transport. :)

In my list for my Flames of War Mid War British Motor Company, my HQ is comprised of the following:

Over the past few nights, I have been diligently working on the basic paint and shade jobs for these and come up with the following. I think they should do okay for now; as with my Late War Canadians, I will go back later on and highlight their uniforms and skin colours, but right now, they are good for gaming.

I also got around to finally getting some markings done for my finished 8th Army platoons. Not sure how accurate they are for the period I am aiming for, but I got so annoyed that I think I'll just stick with what you see below. At least they look pretty. (Still yet to add some wear and tear to them.) 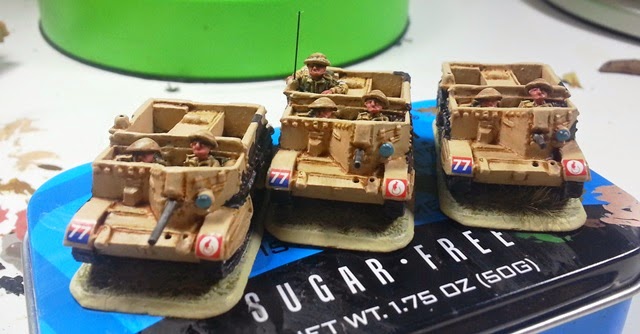 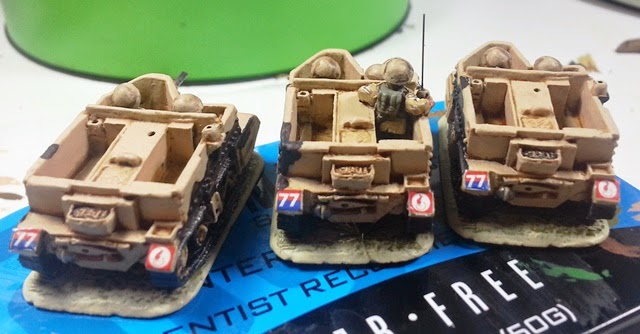 Lastly, I've been working on a little side project for my rpg group's current game - some Robotech mechas! (The GM got a load of them from the Robotech minis game Kickstarter) Each of us four players went and created our own paint scheme for our individual Veritechs and I offered to help out the GM in assembling and painting some up as he's still learning this hobby stuff, bless him. So far I've put together two Zentradi bad-guy bots that look cool but I have no idea what they do, except for one being a leader. I also started on one of the two Veritech Batloids, but will have to get painting first before full assembly as they are fiddly buggers.


Should have some pictures of finished pieces up later this week.