The hero of Canton!

This weekend saw me getting a little time to slap some paint on yet another of my Sedition Wars Kickstarter exclusive minis, this time another homage sculpt to the Firefly sci-fi series based off of a beloved character of the ship's crew, Jayne Cobb.

The sculpt is okay, though seems to be leaning a little too far back and looks uncomfortable. But like the others, he'll do! He's wielding his beloved assault rifle, "Vera" and is also wearing an approximation of the woolen hat his mum knitted him on the show. (Though the hat on the sculpt looks more like a 1920's American Football leather helmet with a hat band than a woolly hat to me. I plan at a later date to add a greenstuff bobble to help with this.) 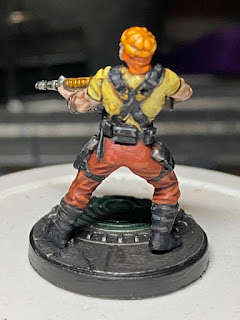 I managed to find some more of these homage minis from this Kickstarter so they'll be painted up too after I've given them a good priming including the last of the Firefly lot, River.

Stay well and safe out there - Dai

Been a busy couple weeks, but I found time this weekend to add some paint to more of my Kickstarter minis from Sedition Wars by Mike McVey. These three are all homage sculpts to beloved sci-fi series and video game, cast in restic and so not even worth attempting to get mold lines off of. Paint jobs were all done quickly for a tabletop level in order to get them done and off the "Unpainted Mountain". 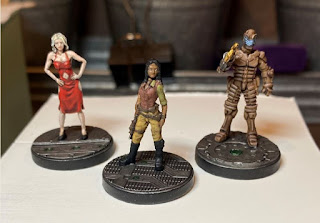 First up is Zoe Washburne, First Mate onboard the Starship "Serenity" and Captain Mal's right hand gal and closest friend. The sculpt was pretty spot on to the screenshots from the series, though her facial details were very soft, but from a distance, she looks the part I think. 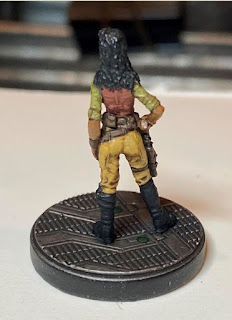 Next up is a nice simple sculpt to represent Caprica 6 from Battlestar Galactica. I think this is a pretty good representation of Trisha Helfer's character and she painted up quickly. Again, her facial detail was sadly a little soft but I feel she'll do. I previously painted her "tech-zombie" version a "little while ago" (5 1/2 years ago! O_o) which can be found HERE. 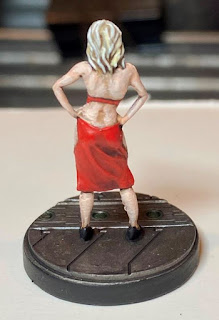 Lastly is a fig of a not-Isaac Clarke from the Dead Space video games. Not a bad sculpt and was simple to paint up. Though I was aware of them, I never played the Dead Space games as I'm not much of a fan of horror games, but I liked the look of this fellow so he was next on the paint table. 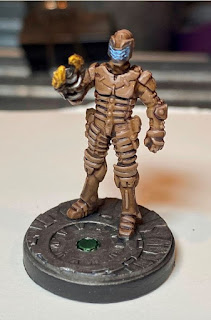 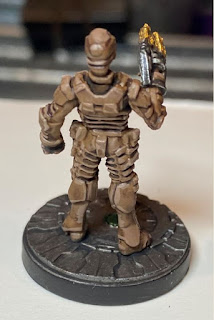 Next up will be the penultimate homage mini from my Sedition Wars Kickstarter collection.
Hope all are well out there, stay safe and healthy - Dai
Posted by Dai at 09:42 16 comments:

Getting awful crowded in my sky

Today's offering is a Kickstarter Add-on from the much maligned Sedition Wars boardgame produced by Coolminiornot back in 2012. Lots went wrong with that Kickstarter that I'll not go into as it's ancient history now, but I will say that all the minis that looked like they were going to be amazing from their initial sculpts, ended up being pretty bad due to them being produced in Restic. That stuff is just plain awful to work with (And because of that, I didn't do one darn thing with any mold lines), nuff said.

The first in this series, (An effort to further reduce my unpainted mountain.) is a "Not-Captain Mal" from the Western-Sci-fi series Firefly. I LOVED this series and it was a crying shame that FOX did the dirty to Joss Wedon, causing his pet project to be canceled before it had a chance to show more of this very entertaining setting.

Next up the final piece from the British/Commonwealth Support Group boxed set by Warlord Games, a Vickers MMG team. Also painted in Canadian greens, this team is going to add some nice small arms support to my Canadian Bolt Action lists. 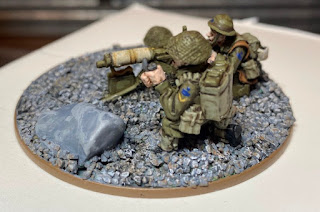 Next up, some more Firefly characters and some other theme'd sculpts from beloved sci-fi titles.