Here she is and isn't she wonderful ladies and gentleman?

She also sports the experimental Kleig Industries Teilchen Emmiter Mk7, a long rifle suited to sniping duties. It's power output can punch a hole through the most stubborn Shadokesh armour and pin-point accuracy leave opposing forces leaderless with a single well placed shot. 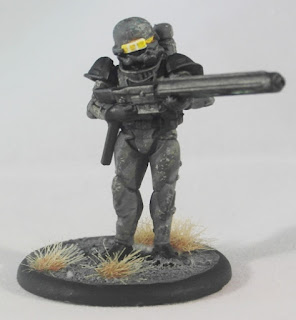 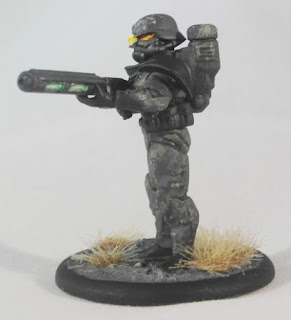 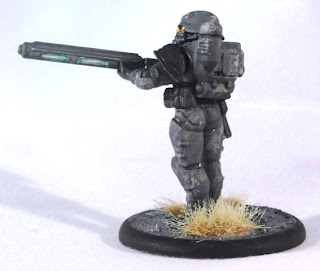 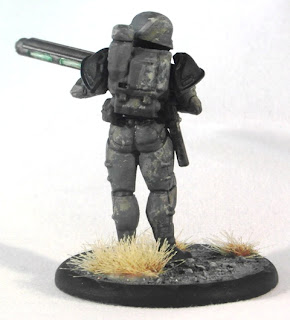 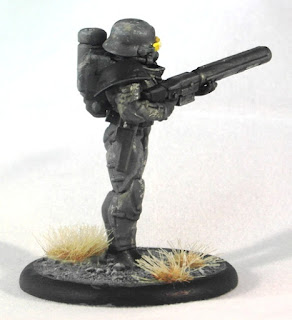 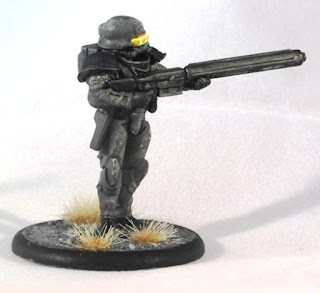 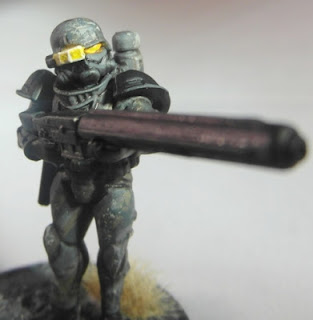 I've never been very good at camouflage schemes, so this was my first try at something I felt was a little more realistic than the contemporary schemes for urban warfare. I started off with a medium grey, then brushed random stripes of a sand colour spiraling all up to the right. The sand colour got a thinner line of a light sand colour on it's upper edge, I then coated the whole mini in a black wash. Next I lightly sponged on white and then Dark blue-grey over the stripes to break it up and stuck another wash on top. A few highlights here and there and some definition to the recesses and this is how she turned out.

I ended up not going for an over the top glow effect on the gun. Seeing as she's a sniper and all, it didn't make sense that she'd be giving herself away with light effects, right? So a subtle green that I think looks rather cool.

Also, I wanted to add some grey weather powders to affect the concrete dust I imagined would be thrown up by her walking about a blasted urban environment, but then realised I forgot to purchase some when last I was at my LGS. D'oh! Something for later I guess. I'm currently putting together 3 fire teams of regular Eisenkern Stormtroopers to add to her platoon and am planning to put paint to a metal Kreigsmarine from Dreamforge Game's original Kickstarter that I think will act as this Ada's spotter.

In other news, the Mid-War Flames of War tournament was on Saturday. Three grueling rounds which left my poor carcass thoroughly knackered. But I had a fantastic time and had a real chance at placing had my dice not done their usual and betrayed me during my last game. (I was apparently tied for 3rd after the 2nd game...) I ended with  a win a draw and a loss - not bad, 10 points in total. Encouraging considering my rubbish performances in prior tournaments! :)

O and here's a little pic of me in my finished costume for the Father's Day Run which I somehow managed to complete in around 39 minutes. Not bad for a fat old drunk. 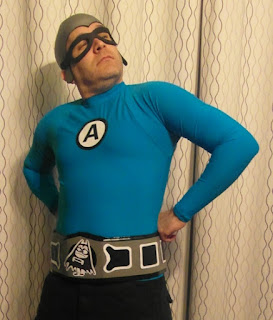 After all the 15mm brown uniformed, green tank'd mass of painting of late, I felt I needed to take a break (Thus changing my list for Saturday's tournament, no way I'll get all those artillery painted before then.) and paint something completely different and refresh my hobby batteries. This is Ada, from the Dreamforge Games Kickstarter from Autumn last year. She was a Kickstarter exclusive. The original comes with an un-helmeted head:


With this in mind, I felt it would be prudent to get two of the miniatures (Along with my box of 20 Stormtroopers.) so that I could have one with a lid and one without. I think the regular "male" helmet fits pretty well.

This is my WIP painting effort, the lighting for these pics is rather awful and I'll be sure to take my completed paint job pictures under better lighting conditions. Ada is supposed to be a sniper and so has what looks to be, some sort of long barreled heavy caliber or laser rifle for the job. One thing I felt was missing from this was a scope of some sort, but I just couldn't put one together that did the sculpt justice, or look streamlined enough for my mind. Hence why you'll see my helmet choice below - it has that eye piece that I imagined looked sci-fi enough to count as an in-helmet scope.

Anyway, on to the pics. I tried for a home made urban camouflage to affect her "sniper" status and felt that the yellow-orange lenses was a good contrast to this. The vents in the underside of the rifle are either going to get a red or light-blue effort and perhaps some lighting effect. 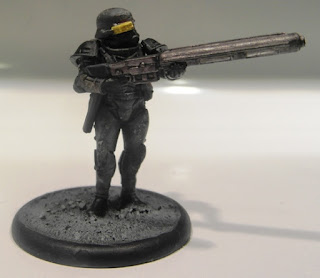 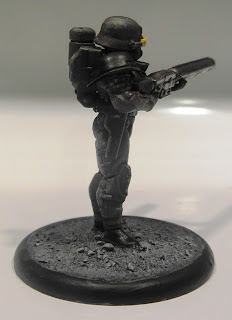 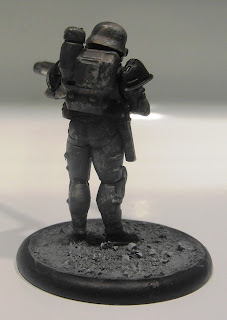 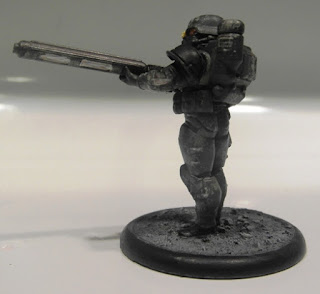 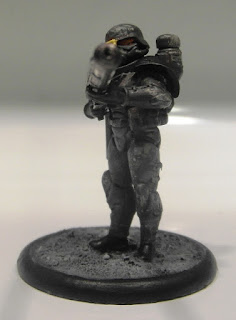 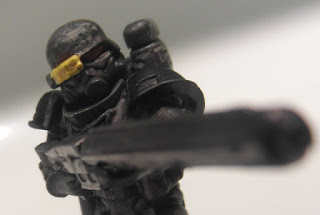 We call this PROGRESS!

It's been a little time since I've left my mark around these parts. As some of you are aware, I've still been reading all of your blogs, just not been all that enthused about updating my own.

Saying that, I've not been idle.

I've been painting like a mad man for an upcoming Mid War tournament on the 22nd and gotten a few other things done too, as follows: 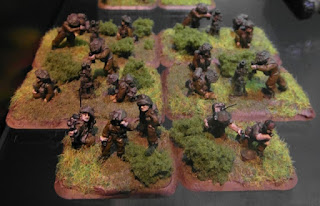 Added antennas to all my Command Shermans and Universal Carriers. 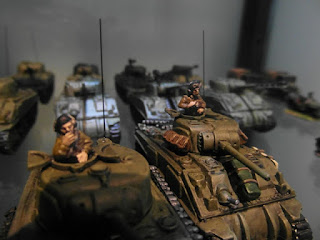 Completed a 2nd Universal Carrier Patrol. (Yeah, I know, these are not the actual models. So I took some paperclip pieces for machine guns and cut down some infantry passengers and now they look close enough.) 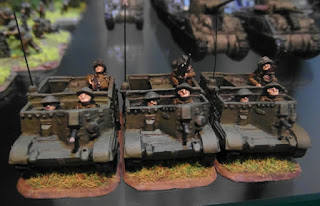 I painted up some 15cwt lorries and a jeep for my new artillery platoon. (See below) 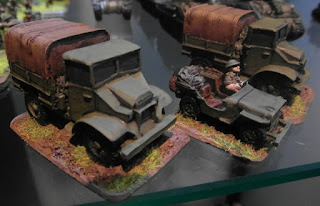 I completed a 4-truck/gun 6pdr Portee platoon. (Jeep is on the way for the command team.) In the 1st picture in the background you will also see (kinda) the very nice and cheap Hurricane I'm taking for Air Support in my list. 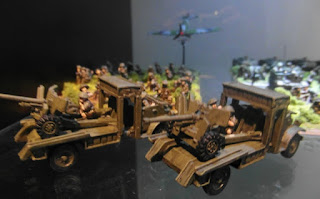 Cleaned up and Primed 8 25pdr artillery guns, their resin bases and their 50-odd crew  (In the garage with primer drying.). I am not looking forward to painting these.

What's currently on the painting table - basing my 2nd infantry platoon, which should be finished  by the time I head to bed tonight. 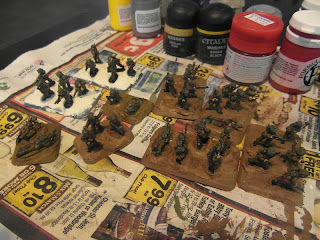 Here's the family shot of what I've painted to date. Quite proud of myself to be honest - this is the most progress I've made on any miniatures project and the closest I've come to that mythical term "Fully Painted". 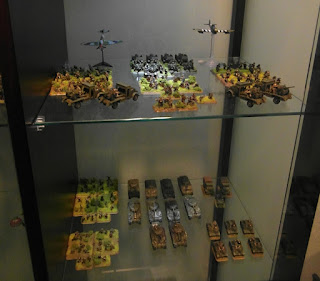 Of course, if I'd stop buying new stuff (Like the below cleaned and put together Guards Armoured Recce boxed set.), I'd get there quicker.... *facepalm* (I also have an AOP Spotter Plane for my lots of Artillery and full 4-stand Land Mattress Rocket launcher artillery platoon sat primed and awaiting paint.) 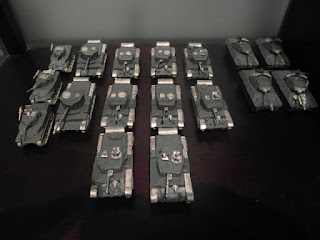 My list that I've submitted for the tournament is:

I think this list should fair pretty well in Mid War. The lack of masses of overpowering Heavy Armour (Tigers, Panthers, etc - they are super expensive points-wise) in Mid War lists means I don't have to worry too much about having to take big Anti-tank guns (17pdrs) and should be able to make do with My 6pdr Portees and even direct fire from the Artillery and failing those, my Hurricane can pop tanks too. The 3 infantry platoons will be both a bugger to shove off of objectives and plentiful enough to be effective in assaults. Carriers will be there to help remove Gone to Ground from dug in infantry so my artillery can pound (And Pin) them and allow my mortars to drop smoke to cover my boys' advance. Still.... plenty to paint in the meantime. 11 days and counting......

As a cheeky aside, I signed up to do a 5 Kilometer run this Sunday** (Father's Day over here in the States.). It's superhero themed and so all participants are supposed to wear "Superhero garb". I'm doing the run with my very good mate and seeing as we are middle aged white boys with beer guts, we felt that doing the run in Aquabats costumes to be wholly appropriate.

If you don't know who the Aquabats are; they're a rock band with a silly family friendly superhero theme that also have their own kids television program.

My mate went to their website and bought the helmets, goggles and shirts and I elected to try to make the belts (As they don't sell them... for some unknown reason). Here's my progress so far. Not bad considering they are made from cardboard, electrical tape, left over Velcro, paper and some el-cheapo grey vinyl. All I have left to add are the black squares to the sides and I'm done. All hail the Glue Gun Gods!

** To be honest I like a good laugh doing stupid stuff and looking a fool. Left over remnants from crazy drunk teens and twenties I suspect. I'm about as out of shape as a bloke can be - why I'm doing this and expecting much else than an asthma attack,  I don't know.
Posted by Dai at 21:20 4 comments: