A Small Mind is Easily Filled with Faith

This is an Imperial Preacher for my long unloved Inquisimunda project. I'd previewed a WIP a while ago and hadn't touched him since until this weekend. Nice to get him off my paint desk.

He's a really cool characterful sculpt and will make a nice addition to my Inquisitor killteams for if/when I play Shadow War: Armageddon again. 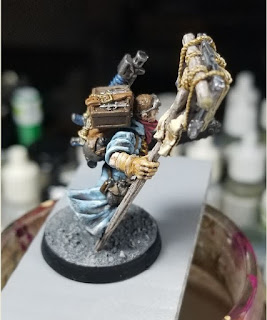 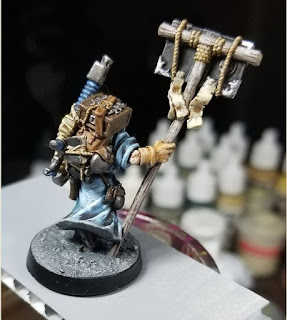 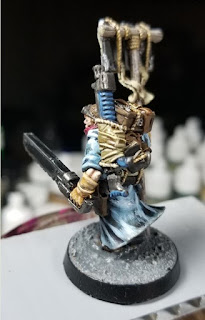 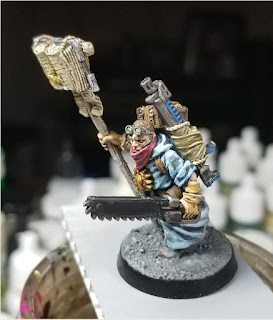 I also got my craters done (From Soviet Artillery) for my Snow Board that my WW2 Soviets and Germans will fight over. Just old CD's with tin foil glued on and spackle spread over that. Not amazing, but they'll do - though I think I'll add some more snow effect to create more of a contrast as looking at this pic, they look kind of bland right now. :/ 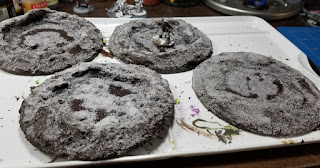 Also started on some 3D printed rpg terrain I purchased ages ago. These shelves will have tiny books on them eventually.

Next up, who knows? :) Maybe some Winter Soviets, or another Carcharodon.
Posted by Dai at 10:49 26 comments:

No WIP pics for this one. Managed to get him done in two extensive late-night sessions (And paying for that with extreme neck pain.).
Same recipe as the previous two. Tried to paint him up some Maori-style facial tattoo's and echo the design (Somewhat) on his chest and pauldron.
Fun fig to work on and after swearing up a storm whilst trying to paint (And re-paint) the tat', the rest of him went along smoothly. 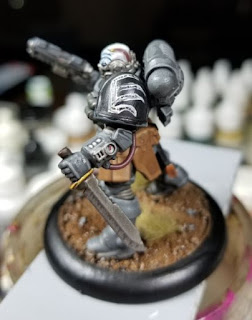 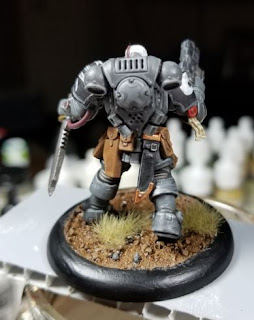 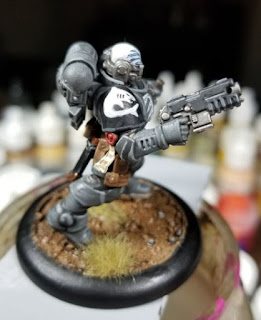 Left to do on this project is one more Primaris and a solo Scout.

The second of my Carcharodon Primaris Lieutenants got finished up this weekend. Not happy at all with his free hand effort, but it'll have to do. I tried to replicate his tattoo design on the side of his helmet - it's close enough i think. Also his pauldron art has a similar design on the side of his gun. Again, not very happy but patience is not an infinite resource in my hobby room.
His chest armour and helmet are a different shade of grey from his arms and legs. Felt as he is supposed to be a leader that he'd perhaps be allowed a little artistic license with his own suit of armour whilst at the same time sticking with the chapter's scheme.
Next i think I'll tackle a Primaris Reiver. 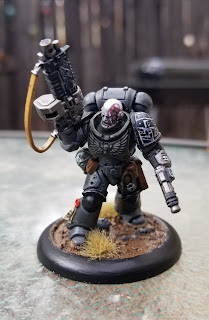 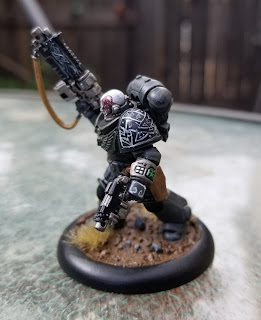 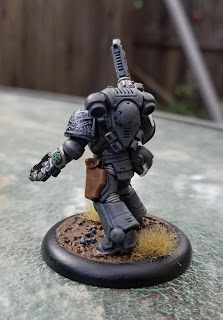 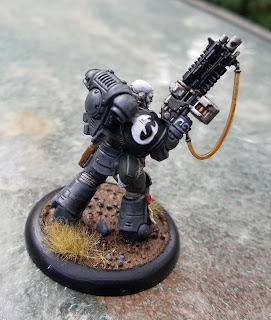 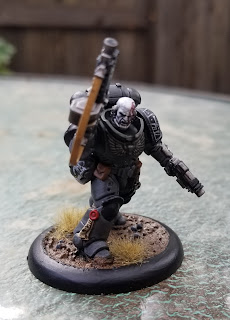 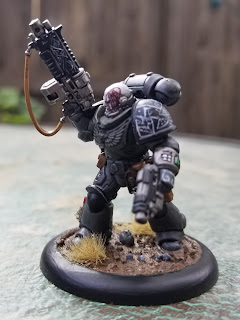 More done on this bugger, but progress has since stalled.


Have a rare game of Bolt Action planned for tomorrow (Veteran's Day - it's good to be a government employee) against Densmol during the day. I'll endeavour to take some pics and write a report. Wish my Soviets luck!
Posted by Dai at 13:26 14 comments:

For whatever reason, my hobby urges have had me pick up the next of my Primaris Space Marines and start slapping some paint on him. The body is just base coats right now, so a bit boring for pics at this point, but I got his head finished and I quite like the result. Hope to have a finished mini to post up later this week.

Something fishy (Part 1 - Carcharodon Primaris WIP, and a few other tidbits)

Hobby mojo has been sputtering at best since my last post. I've sat multiple times to try and work on those poor unloved Winter Germans and.... well nothing.

Then a good mate at work got into the new Warhammer40k edition and it got me nostalgic. Worse still,  it got me appreciating the new space marine Primaris sculpts as they were the "larger-than-life" superhuman combat monsters that the fluff always described, but that never really felt correctly represented by the model range produced up until these new releases. Whilst i didn't go nuts and start a new army or anything so silly, i did pick up a (very affordable) handful of these cool new space marines - just because.

Here's the first in the Carcharodons scheme. (Carcharodons now the new name for the old school "Space Sharks" chapter of space marines.) I read the recently released Black Library novel my James McNiven: Carcharodons Red Tithe and got sudden inspiration to paint my newly acquired armoured giants in the livery of these secretive and brutal (Dare I say it, more brutal than the famed Space Wolves?) wanderers in space.

This sculpt is one of the lieutenants from the current 40k starter set, easy to assemble with lots of cool detail and WAY better proportions than the older marine range: 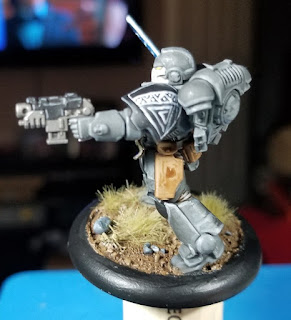 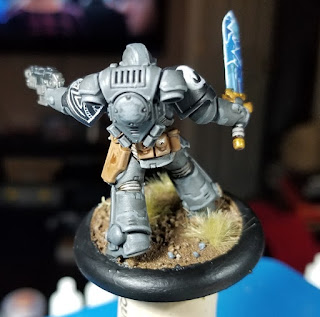 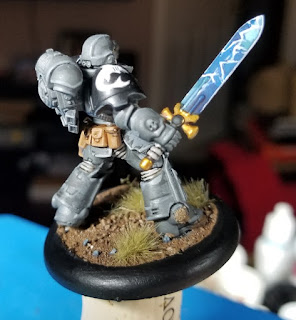 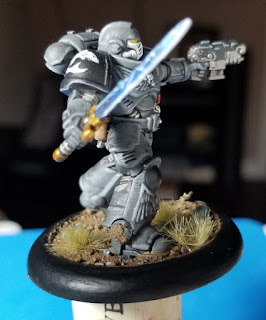 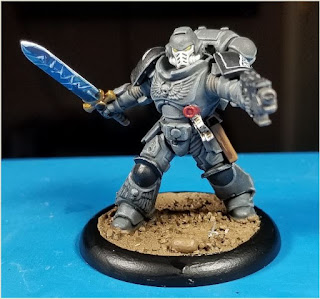 That's not all the painting ive done, i managed to get in a pitiful pair of Zomtober Zombies done to add to my growing group. Officer Douglas and Doctor Shaddix both succumbed to the virus whilst trying to hold out against the undead onslaught at the veterinary pratice that the good doctor resided at. Sadly it was an infected three toed sloth that got them both. Tragic. 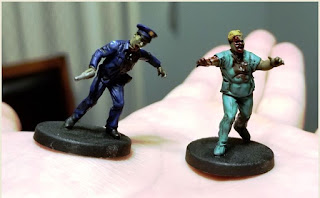 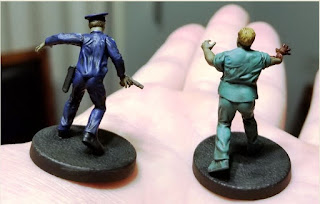 I also managed to sneak in a 3rd zombie, Ms Stroker, still walking about town in mid-stroke apparently after being bitten trying to save wee Willy Finkle who was floating in the local County dipping pool. Little did she know he was just playing dead and waiting for a snack to come splashing his way. 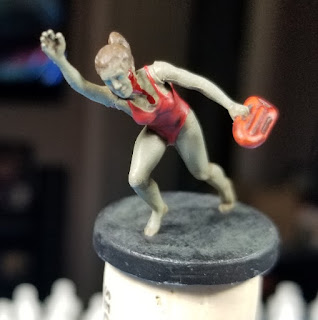 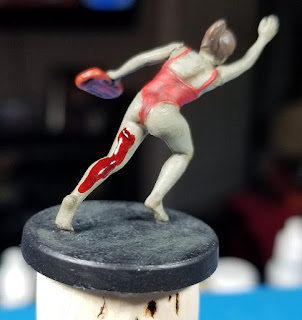 My birthday came and went and with it my sanity, but that's a story for another time. For my birthday, my lovely mother gifted me a pair of books that I'd been coveting but had held off on picking up because they were from France and pretty steep in price after shipping. So there we are, more reference material for yet another Bolt Action project. The failed Dieppe Landing of 1942 by the allies was an awful disaster of an operation, but it helped the organisers of DDay to see mistakes never to repeat again. Unfortunately almost a 1/4 of the men sent never made it back - a horrid price to pay for lessons learnt. I also found the "Ranger at Dieppe" novel at my local library, which is an easy read and describes the newly founded US Rangers who were sent to the UK to learn Commando techniques so that the US could finally boast an elite special forces unit of their own. Armed with these I have gotten the urge to get working on my early/mid war Bolt Action army - watch this space. 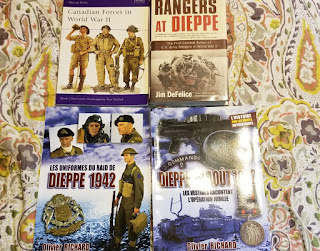 Lastly, a small bit of non miniatures hobby painting. With halloween here as i type (and intermittently answer my front door to costumed children), i feel a small bit of pride as my son goes off in search of sweets  with his mates wearing a mask that i toiled over so he'll have the look he was hoping for. Here's me in the mask from last night, then afterward is the spawn in his whole nasty yucky chest beared ensemble.  About two hours went into this dollar store plain mask to get it to look as good as my patience and the medium to hand would allow. It'll do. 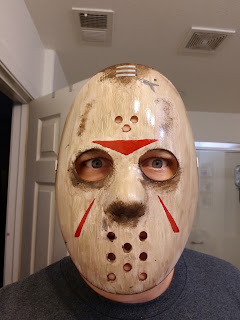 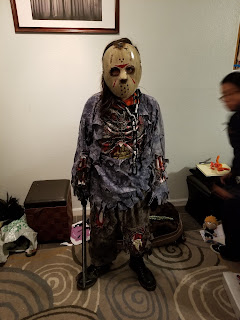