State of the Commonwealth

This'll be my last post before 2014 comes and the end is finally beyond nigh, or some other nonsense.

It also herald's my son's 9th birthday..... which is sobering.

Hobby-wise, I've actually been working on one of my commissions, albeit slowly, but at least I've kept my pledge. I'm hoping to have the (Dark Vengeance boxed set librarian.) figure done before the 2nd week in January.

My Flames of War experience has been fun It's been about 13 months since I first started down this 15mm WW2 path. I've attended 4-times as many tournaments during this year as I'd gone to in my life prior. I've painted enough miniatures to be able to field not one, but two fully painted armies. I was lucky enough to be shown how to play the game by a more than able instructor (Who has since buggered off to North Carolina - Riha you git! :P) and introduced a close mate to the game and convince him to start up his own collection too.

Soon enough I'll be getting my Relic Knights Kickstarter stuff and so will be perhaps painting some different stuff early next year (I went for the rather lovely looking racers of the Cersi Speed Circuit.), though I do still have plenty of Brits to paint for Flames of War still. I also plan to paint up some 28mm sci-fi figs to start on my home-brewed setting project which I'll be playing using the cool 5150-Star Army ruleset by 2-Hour-Wargames.

With that, I offer up a state of the Dai's Canadian 4th Division run of pics, my first time showing them all together. I'm quite proud to be honest. 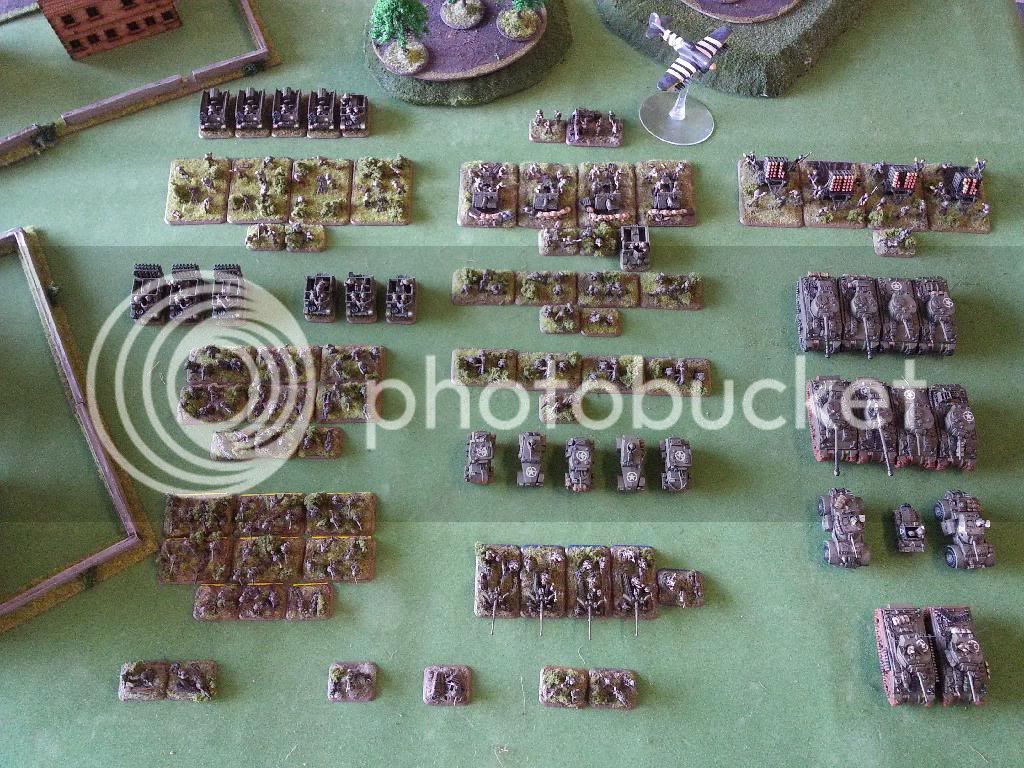 A bit of how's your father

Since being a small lad, wonderful RAF WW2 aircraft aside, WW2 armoured cars were always my favourite model kits to put together. Sure, I had a small collection of tanks, but the models that captured my imagination were the Daimlers and Staghounds and Humbers used by the Commonwealth forces during (And after) the war.

Recce units are in my opinion some of the bravest sonuvaguns out there - driving around ahead of the main force to find enemy emplacements and formations in small minimally armoured vehicles, sacrificing heavy armaments and armour for speed and (Most times) maneuverability.

In Flames of War, recce units have some cool and handy abilities to set them apart from other units that allow them to break off from combat, hide in cover better, reveal tricksy enemies to make them easier for your platoons to fire upon, make it harder for enemies to drop ambushes and they also get an extra free movement at the beginning of a game. These rules make for a very versatile and useful unit. Staghounds themselves are pretty well armoured when compared to other AC's and can withstand small-arms and even some smaller caliber gun shots too at a stretch. (The models themselves are almost the size of a Sherman tank to boot!)

My latest offering from the painting table is [again] for my Canadian Armoured Company (4CAD), the Armoured Car Platoon. This consists of two Staghound I's and a Ford Lynx (Which looked so similar to the Daimler Dingo, no-one's produced a model to represent them.) with an option to switch out the 'Dingo/Lynx for a 3rd Staghound. I've got just the basic set-up, though I do plan on getting a 3rd Staghound in the future so I have the option to play them armour heavy.