Whispers from a Xenos heart

Frallitus Thorayne is of an unknown species, from a very far off part of the galaxy. It lives in the darkest recesses of society where not even the despicable Hrud feel safe. A Psyker of prodigious power, this xenos has otherworldly control over the minds of any beast or vermin within his locale, able to send them to attack any threats it feels might be in it's adopted territories. 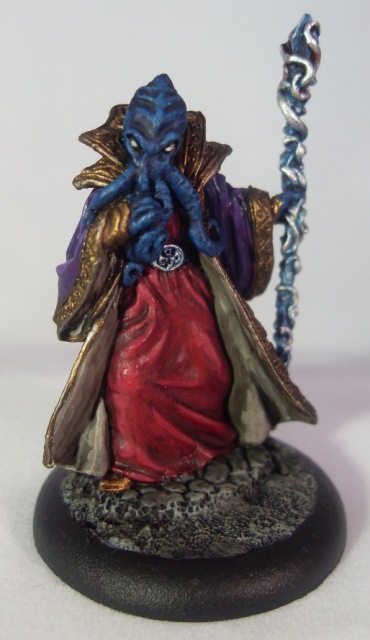 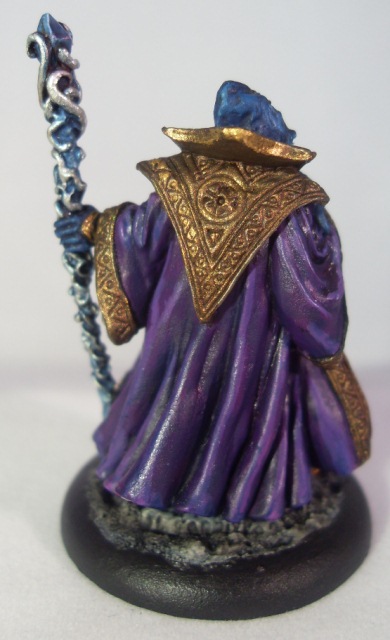 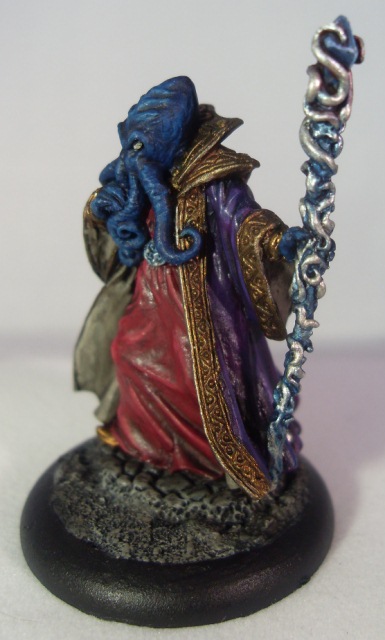 Found time today to finish this little wonder of a fig. Illithids are my all time favourite D&D beasties and this has to be one of my favourite sculpts. I had to use it in my campaign. Now I just have to come up with a cool enough group of vermin creatures for it to control and kill off the player teams! :)﻿

So after being knocked for six by whatever evil pox that had taken residence in my system for more than a week, I’ve really struggled to get any interest going in my hobby.


The big Ogryn got a little work done on him and thus far I’m kind of “meh” about his paint job, but that’s pretty typical for me. But he’s now been sat for over two weeks.

Likewise the commissions I’ve got are sat not done. Luckily they are for a work friend who has given me no timeline to get them done.

So forgive the lack of activity here, I hope that will change soon and that this current edition of Dai’s hobby burnout will soon pass on, but as it stands, “thar’s no-one here ‘cept us chikuns”.

Sadly no hobby update as I've been sick as a dog this weekend.

But in my rambling about in other blogs, I saw that Pulp Figures are soon to release these and thought that with a few brass etch aquilas here and there, how cool a ship's crew they'd make. (Very 5th Element too.) Perhaps some npc's to rescue in a mission or some such?

Wrote a little while back that I'd show my small painted Guard section and to be honest, forgot just how small the amount of painted figs were. But here they are regardless. Hope you like. They are the troops of a personal army belonging to a Rogue Trader of House Draquon. As well as the stuff pictured below, I also have about 7 or 8 infantry, veteran and/or heavy squads of both Rogue Trader plastic Guard and metal and plastic Squat models. I used the idea that the Trader Prince had rescued the dwarf contingent from a Tyranid threatened base during the Squad purge. So lots not pictured below. One day I'll look into buying them a tank or two. :)

Also there is a small WIP of what I've been adding a little lick of paint too for my =][=munda project. 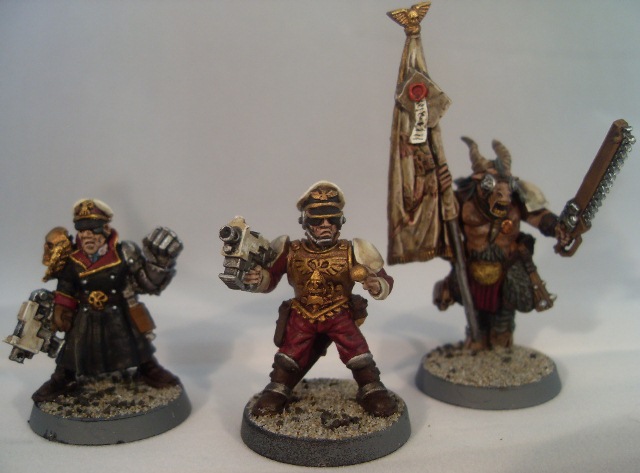 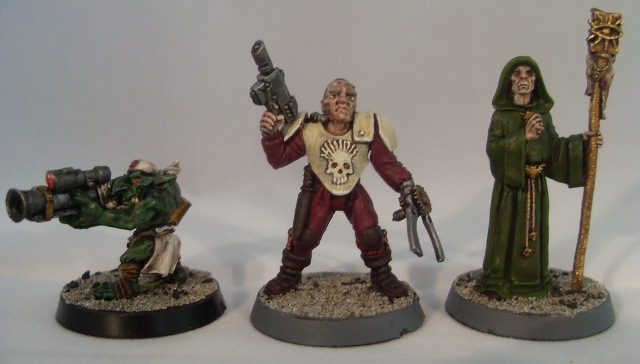 This squad was my tester squad for the Burgundy and cream scheme. I like it as it seemed the kind of thing a showy Rogue Trader would have his ship bound troops wear. 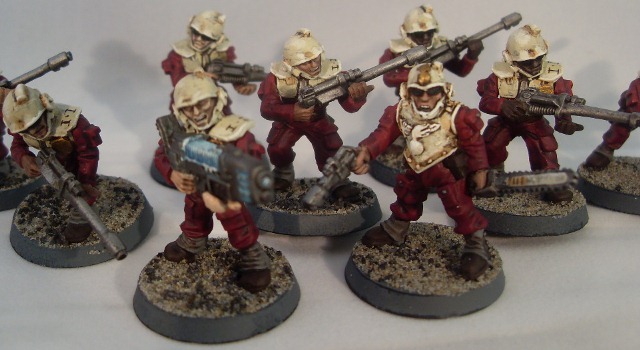 Squat command group with unpainted beastmen penitents in background. Squats will be stripped and repainted as they have a 14-year-old-me paintjob right now. :)

Trying to fit these Grotz in the list. Was thinking some sort of veterans or bodyguards to the Rogue Trader.

Creed model is my Rogue Trader along with his Command group. The two "white" no arms figs will be removed I think and added to a normal infantry squad so I can fit in the above Grotz. The Fleet advisor will be stripped also in order to be painted in the correct colours.

Washed out pic of (Left to right) Ratlings snipers, 2nd Platoon command, Catachan squad who will be painted as ship's hands and the start of another infantry squad.

Why so much infantry? Well, fair question, seeing as how tanks are the thing right now with Guard. but I always LOVED seeing pics of the masses of RT guard marching across a battlefield with titans in the background and little else to help them aside from their numbers. So I always wanted a Guard force made in such a way. All praise the meat grinder!

Lastly a wee WIP of what I've been painting of late. (Commissions aside.) 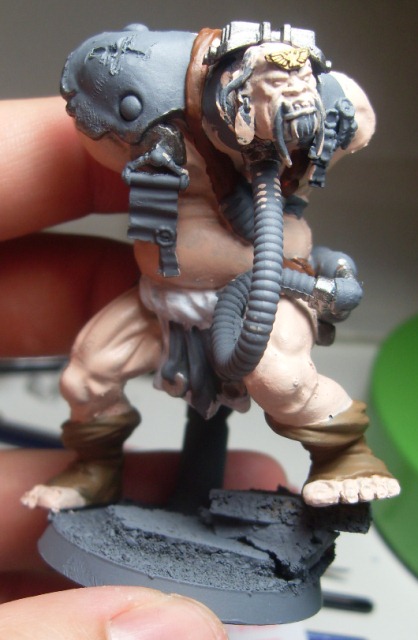 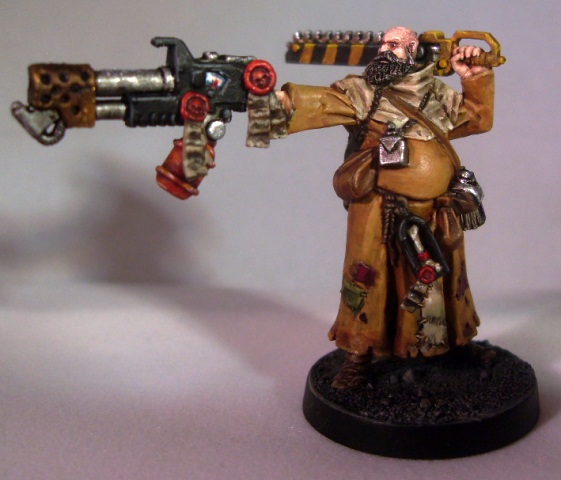 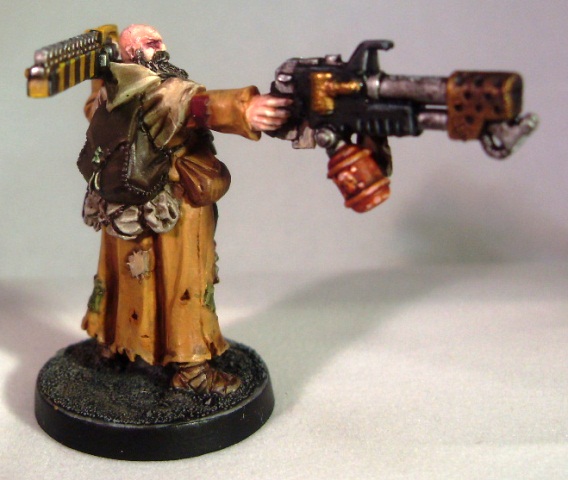 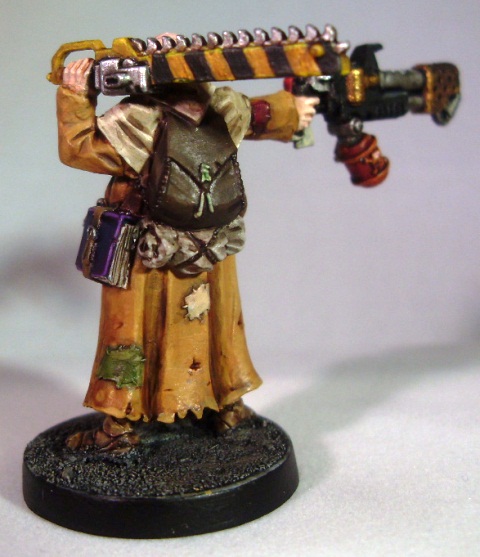 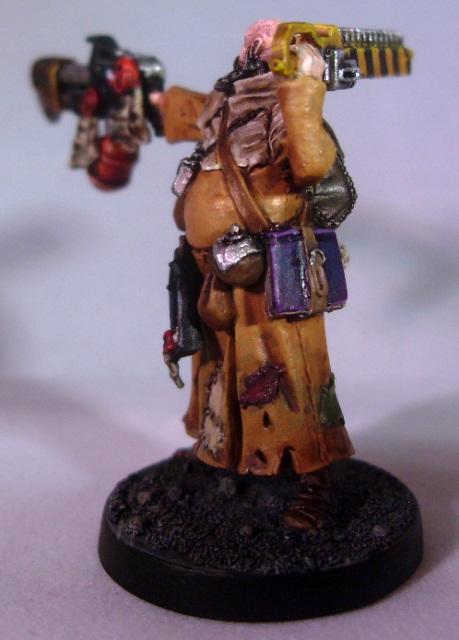 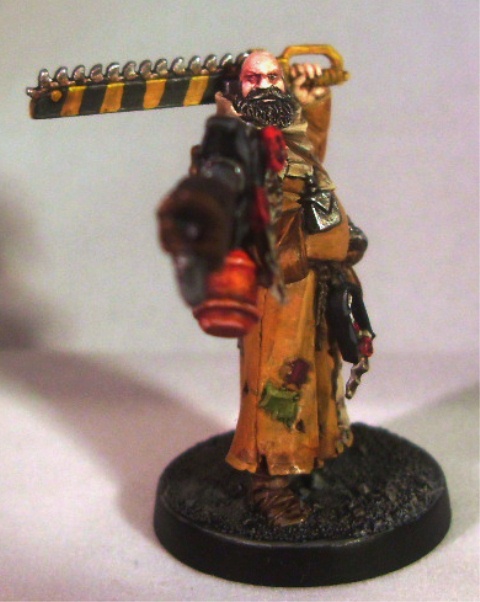 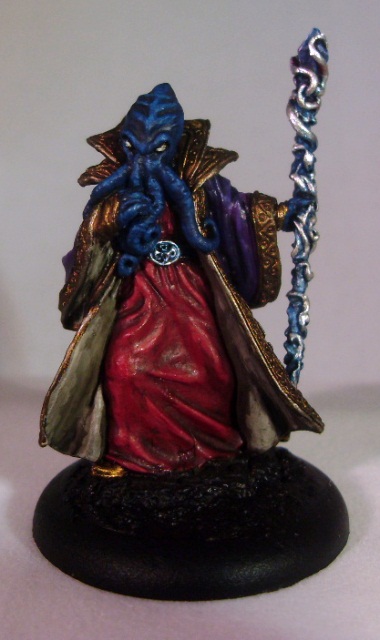 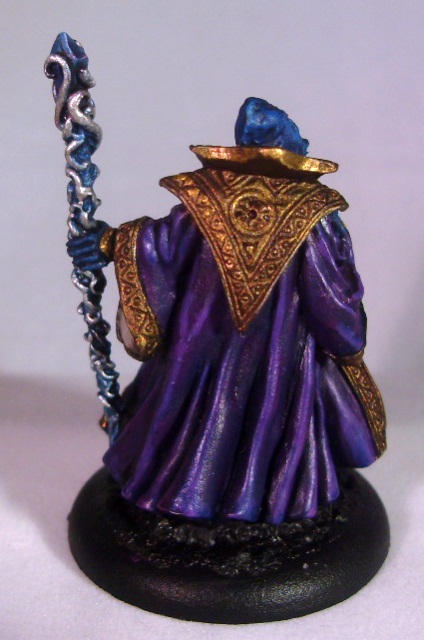