Six out of seven ratlings are done! (The seventh had a mishap, and so I’ll have to start from scratch on him.)

But I’m calling this one done done done. The models weren’t cleaned up or anything prior to me getting them and I refused to do it myself after goods had already been exchanged and hands shaken. So they were painted au naturelle so to speak. Tabletop quality was requested so that’s what you see here. Nothing special, but good enough to get them laid down and ready to snipe out enemies of the Imperium of Man.

To celebrate, I also finished up another miniature I had promised a mate I’d do up for him over a year ago for a roleplay game character (From a campaign that we have since long finished…. *facepalm*). The figure originally sported a nice bo-staff to go with it’s “Brotherhood of the Wolf” look, but the character it represents hacks his enemies apart with a hand axe, so a simple weapon-swap was done. (No back view as it’s just a plain black cloak, which is…. Boring.) 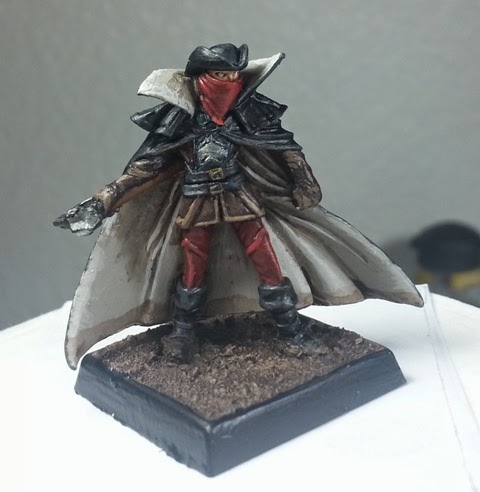 Once I get the final ratling done, it's on to my Desert 8th Army Brits. I have all but one truck (Out of 15 needed....) out of the models required for my Mid War list and I can't wait to get painting it. Stay tuned!
Posted by Dai at 10:57 12 comments: