Hiatus and the World Cup

Though not extended by any means. (I know my posts have gotten further and further apart in frequency.)

We are soon to take a family trip to Panama to commemorate mine and my wife's 10th year anniversary.

I'll try to remember to take and post pictures, but I'll make no promises.

Stay safe, stay well and let's all celebrate as Italy lift the World Cup trophy for a 5th time! ^_^

"Why does Dai, "the Brit" support the Italian football team????"

Because I was originally born in Monza, Italy many moons ago. I've always supported Italy in international football competitions and Wales (Where I mostly grew up and went to school, etc) in rugby matches. I could go on to mention my Greek heritage via my Grandmother who is from Athens and my American from my other Grandmother, but that's a story for... ZZZZZZZZZZZZzzzzzzzzzzzzzzzzzzzzzzzzzzzzzzzzz (I'm basically a Heinz57 mutt, through and through. Hence why I'm so pretty and have an amazing immune system.)
Posted by Dai at 15:27 4 comments:

This girl is done.

Not to many changes from the last update - sorted some shading, painted and glued on the cloak and a few other highlights here and there. I'm pretty happy with the result.

Tried shooting her with a black background for a change. I like it better than the white, only thing is that it feels like her lighter colours are drawing in all the light and so lots brighter than they actually are. I think a grey background would work better for next time. I need to see if I can't find an old grey t-shirt to cut up for the job. 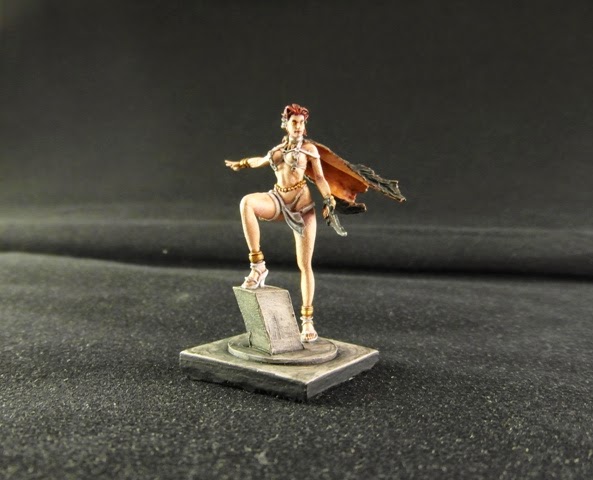 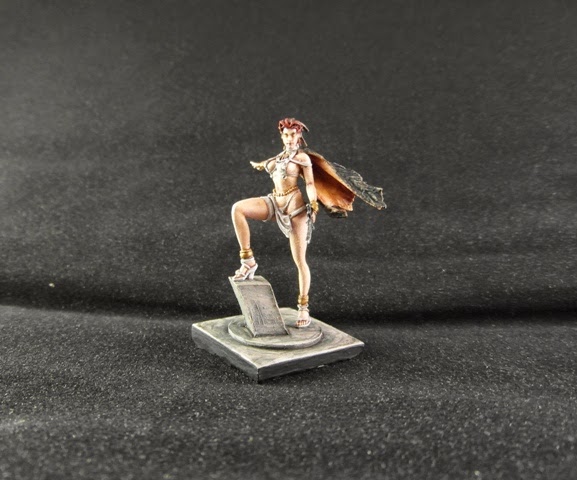 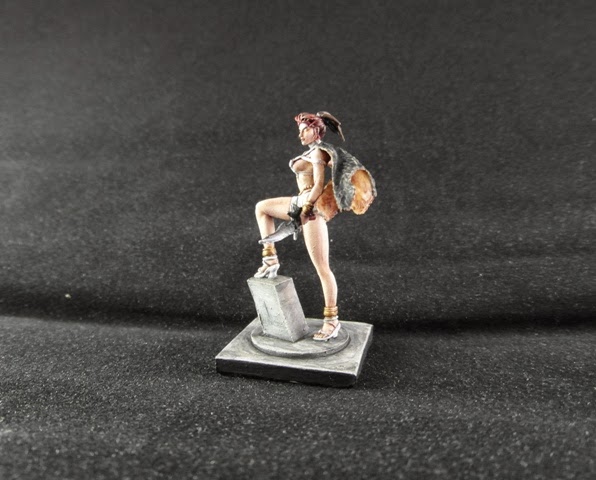 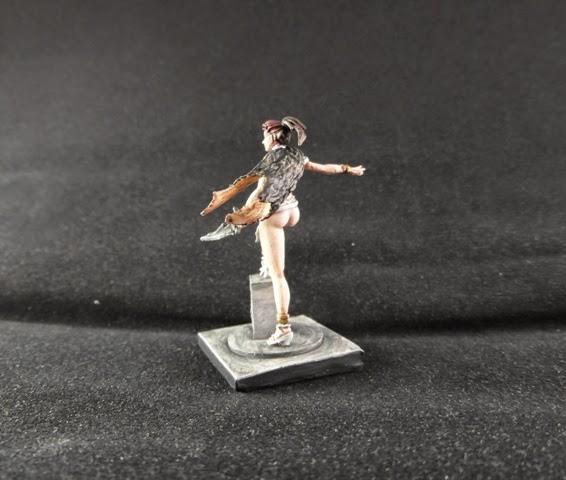 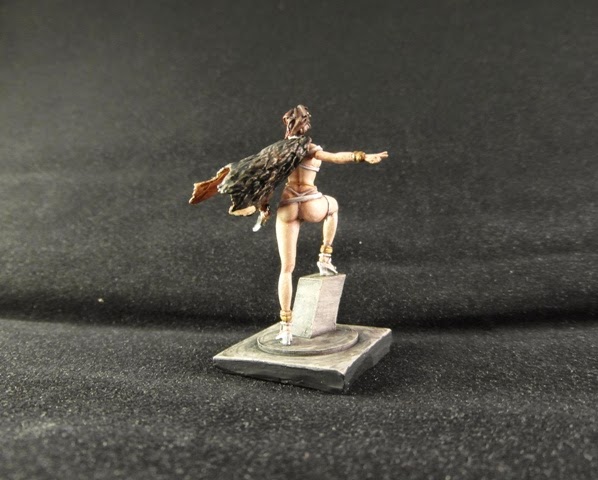 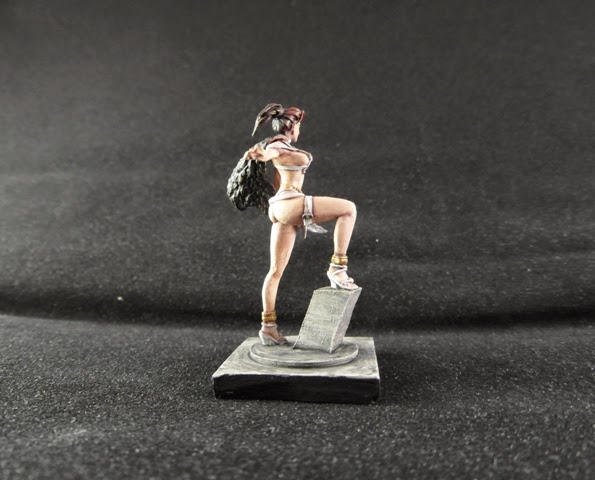 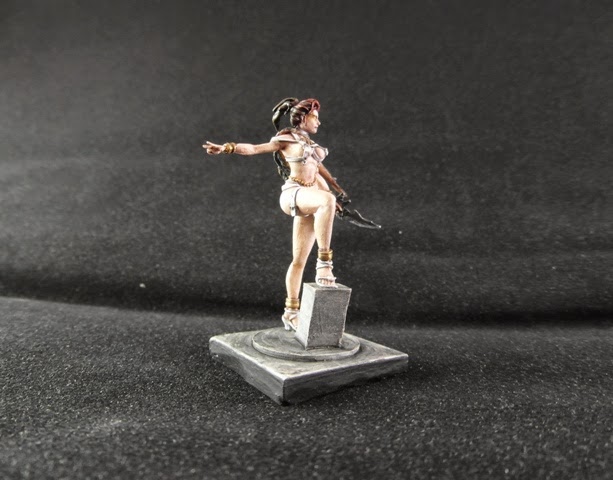 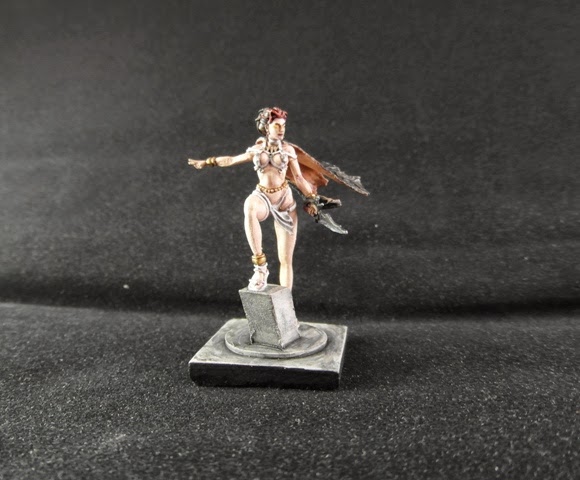 And here's some pictures of the Grave Wardens again, this time taken in better lighting and so forth as promised. As you can see, they have basic tabletop paint jobs, but that'll be fine for roleplay purposes. 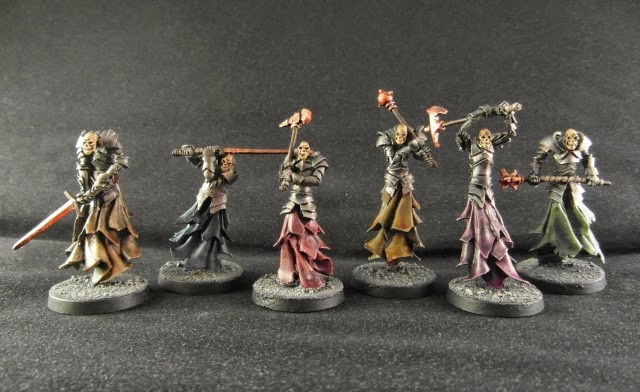 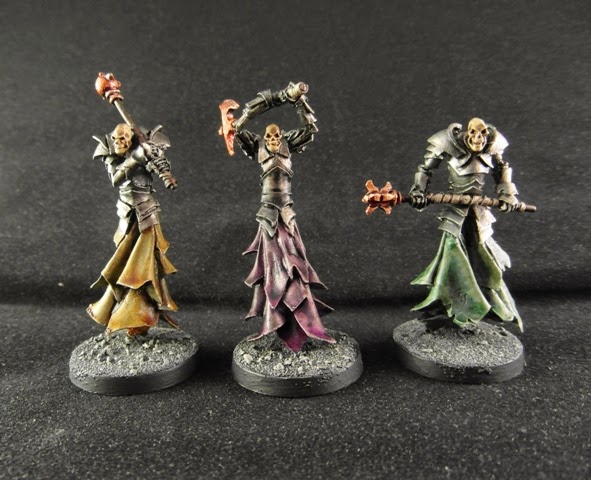 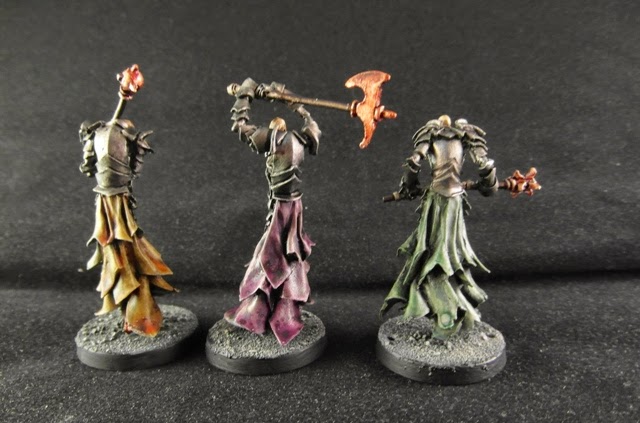 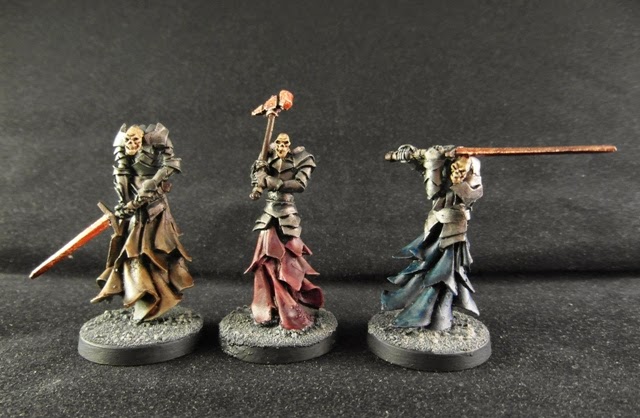 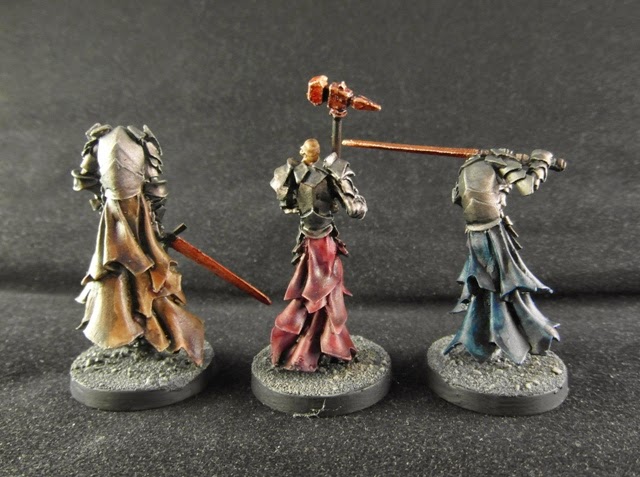 Lastly, this chap is going to be the Necromancer-wizard-type who'll be the cause of the Grave Warden's summoning! 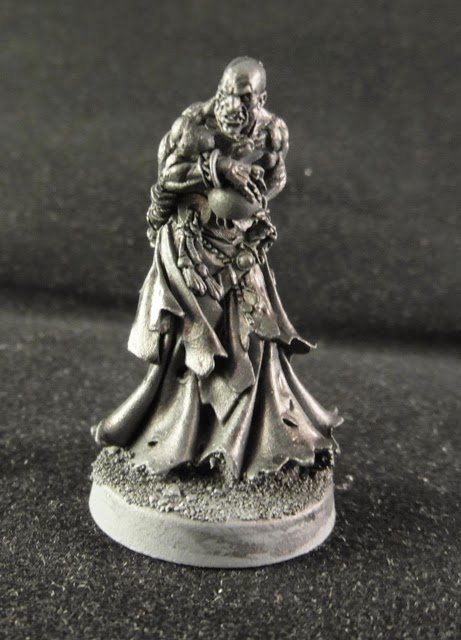 I'm a big fan of the Kingdom Death line. I love their visions of horror and am eagerly anticipating the release of their boardgame "Monster". They are also known for their pinup figures line(Good or bad - an argument for another blog) and was kindly gifted one of them by my very good friend Dave after he managed to pick a couple up at GenCon last Summer. That mini has sat on my shelf for almost a year.... I've been completely intimidated by the fragile tiny details and that their is SO MUCH bare skin to paint. I was (Still am truth be told) also intimidated by the thought of attempting to paint a beautiful female face on so small a scale. So yeah, lovely resin mini, not given any love.

Well, with the release of Kingdom Death's "Satan" minis, Dave took it upon himself to grab a set and declared I would paint them up for him (The cheeky get!)! Again, they are wonderful provocative sculpts with exquisite detail and I couldn't say no. Then I remembered why I hadn't painted up my OWN Kingdom Death mini and forced myself to just get stuck in and see what happens. This is where I'm at so far. The close up pictures really don't make her look as good as she does in real life. (And I know there are a few mold lines I'd forgotten to remove, but damn, the resin she's made from is so fragile!!! Two of her fingers and thumb on the outstretched had were already broken before I took her out from her packaging - clumsy gs replacements hastily stuck on.)

The sculpt comes with a choice of this head or one with a cloth over it's eyes. I figured as I wanted to practice this mini, the opportunity to work on her face would be the better option. She also sports a spear/staff, but it just wouldn't straighten in hot water so I left it out altogether. There's still a fur-cloak to add too.

Would love to hear some feedback chaps! 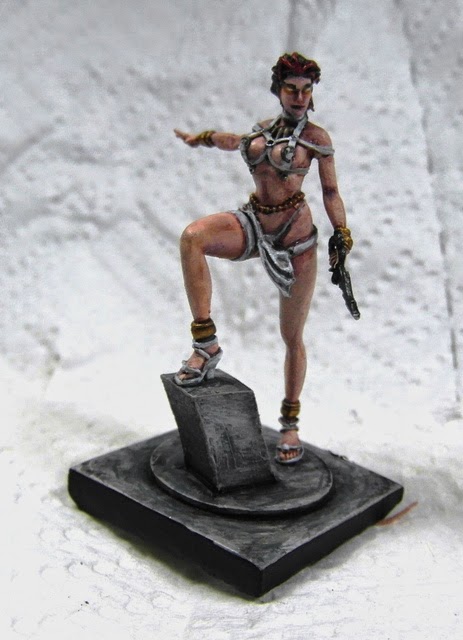 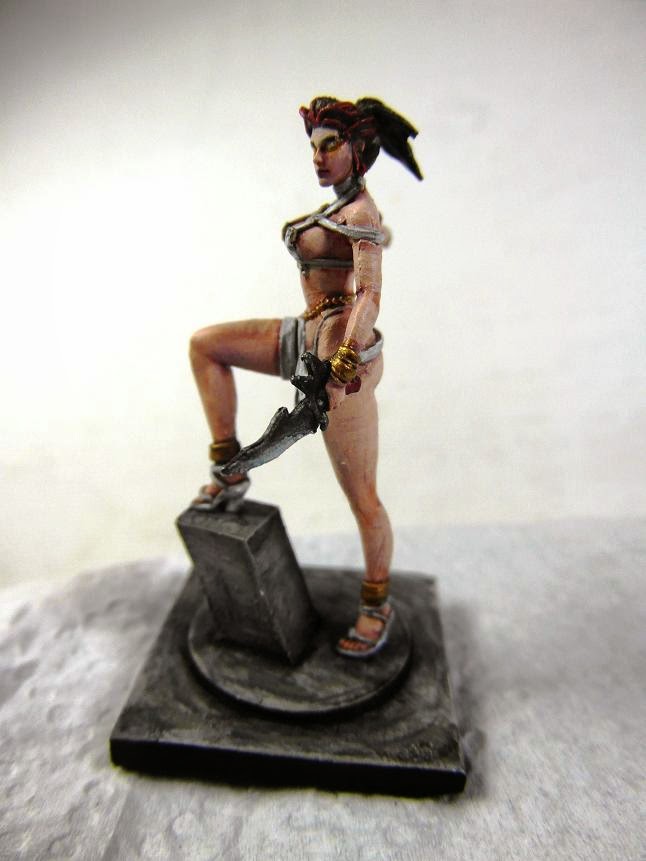 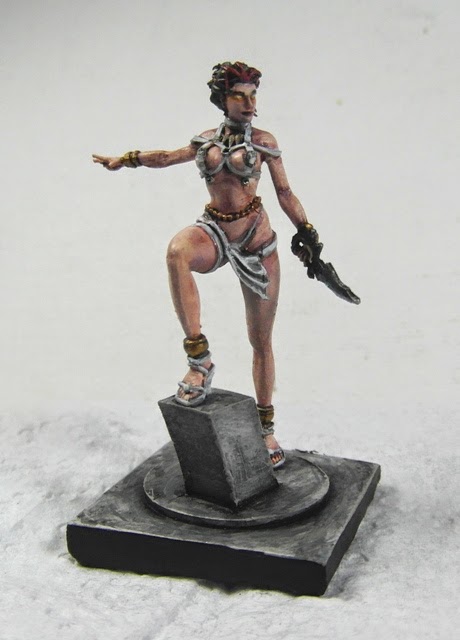 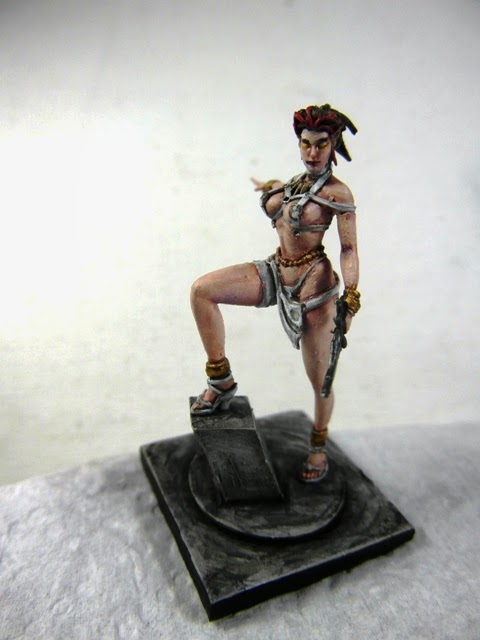 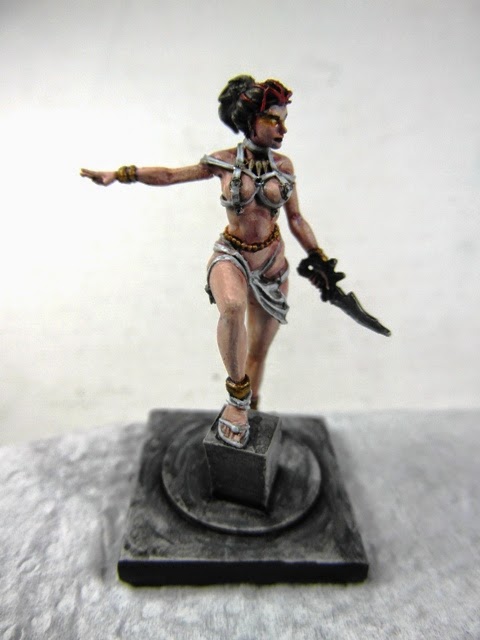 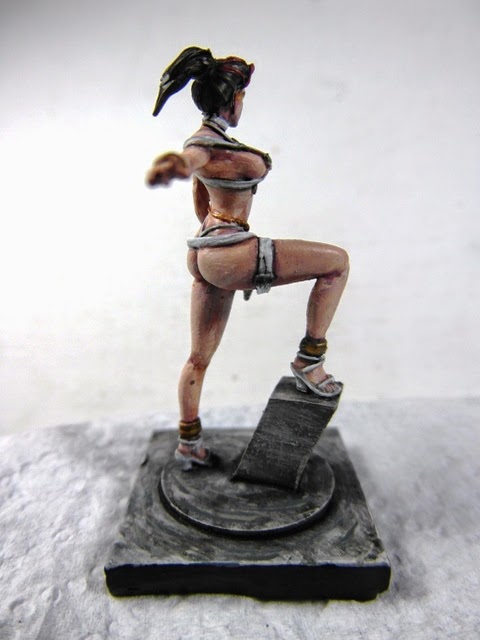