As I sit here about to watch Wales versus England (AND WIN!!!) in the group stages of the Rugby World World Cup, I realise that I've been at this blogging business almost 4 years and am now writing my 200th post. Not as much as some, but certainly impressive for a lazy sod like me. So with me averaging almost a post a week and at the writing of this post having 111 followers on my widget-thingie I'm rather chuffed in this blogging effort of mine.

Enough going on though. Meat and 'tatoes-wise, this post is a bit weak on substance as this week has been a tiring one at work and I've only managed to get the remaining 3 skeleton warriors finished of my original 10. Same recipe as the other seven and all together they do look rather splendid and Harryhausen-esque if I do say so myself!

Now. With 200 posts and seeing other bloggers doing similar, I thought I'd put back into the blogosphere some and offer up a small contest for the occasion. So here are three prizes I plan to send out to three lucky winners, announced on.... oh... maybe Halloween (So my feeble memory doesn't have an excuse for forgetting.). All you have to do to win is be a follower of my blog, leave a comment and let me know just how much better the Welsh game was in the 2nd half compared to the Saesneg fumblings. You didn't have to have watched the game, just get creative. :) I'll pick three winners at random and will ask for email addresses once picked. Prizes will be one each and selected in the order that the names are picked out by those three. If you somehow feel you'd like to advertise this competition elsewhere, then leave a link in your comment below to said advert and I'll give your name a 2nd chance for the draw for these "fabulous" prizes. (I'll cover shipping, though I'll not cover any customs fees that might, but shouldn't, arise.)

Thanks all for following, reading and commenting on my posts. The pleasure through these 4 years has been all mine.
Posted by Dai at 15:33 29 comments:

Last week was super stressful and busy with Jury service and all sorts of other shenanigans. But all done now and I did manage to get some painting done.

These are more minis for my upcoming roleplay group campaign.

Painting bug is back so taking full advantage of it.

Got the rider done for the Dire Wolf I showed last post. Although he's supposed to be an orc, I painted him up in the same colours as the Hobgoblins I'd completed months ago. He'll be their leader and I hope will put the willies up my players when I plonk him down on the map. The figs are old Grenadier sculpts and the rider used to have a metal crescent shaped back banner thing, but I've long since lost that, so used a plastic GW bad moon one instead. Looks okay for what I need it for.


I then went on to finish up another trio of skeleton warriors to join the other 4 I showed last post. More of the same from last time - simple quick paint jobs on some old sculpts. 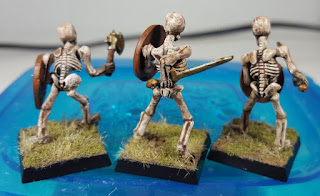 Not sure what I'll work on next, there's still 3 of my skeleton warriors to go and 6 archers too. Though I'll probably get started on my 28mm WW2 Winter Soviets as Densmol is coming over Wednesday for a paint session.
Posted by Dai at 13:12 4 comments:

Been trying to get through the basic block of minis I think I'll need for the initial chapter of my upcoming rpg campaign.


Next up a small group of skeletons. These are also old Citadel Miniatures from their first plastic Skeletons boxed set. Seeing as they're just going to be fodder for the heroes to take down, I didn't bother to get rid of mold lines and their paintjobs are super simple.

Lastly, part one of two on this one. A "Mini-boss" and it's mount - a Dire Wolf.

I'll start this post with a swift public message:

*this message was brought to you by a disgruntled Dai who'll not be using the listed phone app again. Ever.*

Ahem. But I digress.

The reason for this mild outburst is from when I attempted to upload a new post using said phone app, it instead deleted my previous post (Apologies to those kind enough to add comment) and the full post I had laboriously typed up up til that point.

Enough whining about the past though.

Here are my repaints of my friend Gregg's Rebel ships so that they look better on the tabletop and also can be more easily told apart during games. 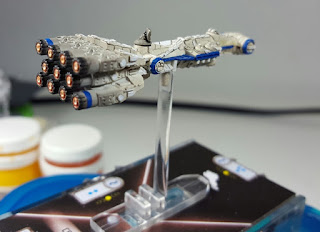 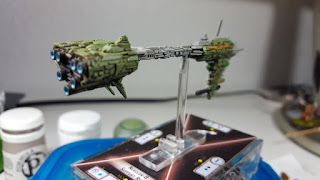 So now Gregg's fleet at least looks boss, even though it's yet to win a game...

I also got these two Confederate Officers done for ACW games. I intend to use them as Brave Colonels in Regimental Fire & Fury and as Heroes counters for when I play Sam Mustafa's Longstreet rules set. Simple paintjobs on some characterful sculpts. 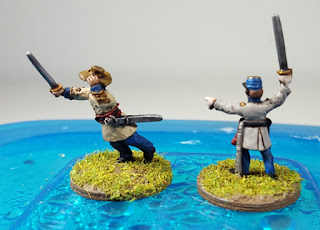 Late last night I also started getting paint on my skeleton warriors that I intend to use in my rpg campaign. Still 6 archers to get started on too, but I'm going to let my son do those. 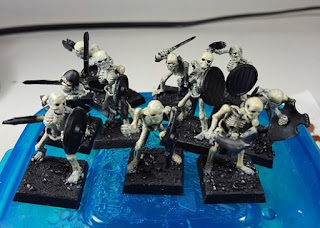 In my last post I presented the Serving Girl for my rpg tavern scenes so here are her parents, also by Reaper Miniatures. Easy to paint and given a quick and dirty paint job so they're off my painting queue.

Per usual, these pictures are from pre-varnish stage.
Nice to have some non-combat NPC's in my collection to be honest.

This evening I'm demoing a game or two of Star Wars: Armada for my mate Densmol and on Sunday I am playing again with another mate, Stew who has also yet to play. Will try to get some AAR's up if I remember.
Posted by Dai at 13:31 10 comments:

Super simple bear painted up as an animal companion for my previously featured Druid rpg character. The bear is by Reaper Miniatures in their Bones material. Not much more to say on the beastie, so I'll let the pictures speak for themselves. 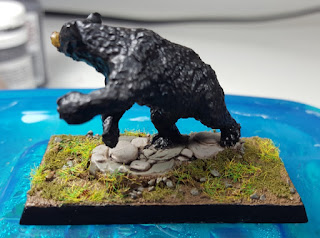 I also got a quick'n'dirty effort done on this wee buxom lass, also a Reaper Bones effort. Went with wooden/clay mugs as that seemed far more believable than glass in a fantasy tavern. 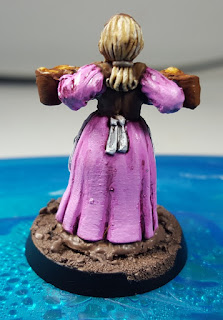 Next up are her parents, the owner of said tavern.

The ninja is on pause - not feeling so enthused by him right now.