I am Denzo the Harpist!

In my last post I wrote a little about this month's Flames of War tournament here in Norcal, held at Gamescape North in San Rafael. 1250 points Mid War and in an Urban setting with 4'x4' playing areas packed with buildings. I took a list out of North Africa, 8th Army Rifles from the early Italy campaign:

It's a well  rounded list, though made more for facing infantry, rather than tanks. Luckily I didn't see more than 6 tanks between all 3 of my games.

18 players turned up on a disgustingly hot day, bringing an overwhelming majority of infantry lists. The competition was pretty tough and people went all out trying to come up with some whacky lists (And others not so whacky - am looking at all you oodles of Grenadier Players... *yawn*). In the end, the event was won by Brad Feliz and his nuts Soviet Tank list (One of only two Tank lists submitted that day.), second place awarded to my mate Joe Harney who played... Grenadiers. *yawn again* :P

Once again, I was super lucky to be awarded Best Presentation. Originally it was a tied result for this award, as both Devin Moore and myself had equal votes from the tourney attendees.This lead to us having to have a "Rock-Paper-Scissors Best of Three-Off" to sort it all out. My keen strategy of paper versus rock won the day though and I took home the award! Along with my playing record of 1 win (Against Densmol), 1 draw (Against Richard Gagliasso) and 1 loss (Against brand new player Pablo Miron), not a bad result at all for the day.

Here's a selection of pics from the day - please excuse the lighting, Gamescape seems to have lighting more suited to a romantic dinner than wargaming if you ask me.


A prize was also given for the best looking table. Really, Brad won, but as he also won Best General, he passed and let the 2nd place table take the honours (Dave Partak's super full Stalingrad effort.). Still though, Brad put a LOT of effort into his buildings and even wrote a history piece to base it on.


Lastly, I got a little hobby work done too. After reading Mad Padre's swift review of the Italerie 1/72 bridge he had purchased for his 20mm project, I went and bought one for my own gaming table. This model is a lovely sculpt of only 6 pieces and went together like a dream. I really wasn't all that worried about making it look super special seeing as it's no diorama piece so just primed black, based in a P3 Cryx light grey-type colour on the cobbles and Spacewolf Grey on the larger flagstones, then went to town with my collection of washes - Devlan Mud, old GW green (Who's name I can't remember), Griffon Sepia, P3 Armour wash and SecretWeaponMiniatures dark black wash (Again can't remember the name.). The end result is fine by me for gaming, just needs a thorough coating of first Gloss Varnish (To protect the paintjob.) and then one or two of Matt, so it won't look all goofy and shiny.

Here's some last minute before bedtime pics from last night: 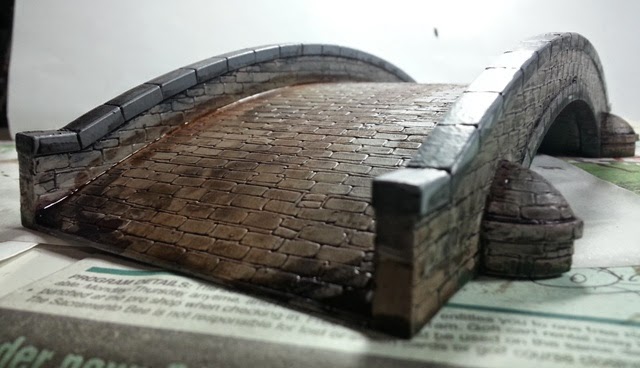 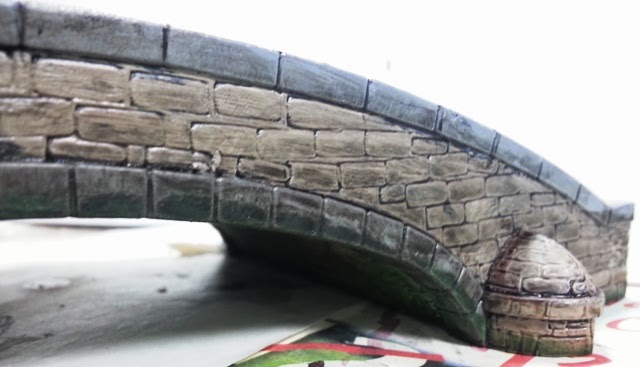 It's been a while eh?

I've been a bit off on blogging of late, so forgive the lapse in time since my last entry.

Life has been a bit busy keeping up with the World Cup and our trip to Panama took up quite a bit of my time. I did manage to get some hobby work done though nothing impressive.

The trip to Panama was amazing. Quite simply the best holiday I can ever remember going on. My wife's family were very welcoming and Panama itself was so beautiful and full of life (Being that it's Jungle almost throughout.). I've never seen colours so vibrant, nor experienced nights so full of the noises of local fauna. I would wholeheartedly recommend any to go there and see it all in person.

World Cup was... disapointing for Italy, but nice to see both Miroslav Klose beat the record for most goals scored in World Cup history and young James Rodriguez of Columbia getting the golden boot. Italy were taken down (In this humble football supporter's opinion.) by the terrible play calling by severely inept refereeing seen throughout the competition. Okay, sour milk set aside and bad sportsmanship hat removed. Once again, the wait for the next World Cup (This time in Russia) will be a long ordeal, but hopefully with a better outcome for my team!

On to hobby news:

On Saturday 26th July, the NorCal Flames of War Circuit will host a tournament at Gamescape North in San Rafael. It'll be a 1250 MidWar "Urban" effort, with small 4'x3' tables and some old city-fighting-type rules being used throughout three rounds - "Across the Volga" (Allows Artillery to be off-table support [as it should be imo.] choice.) and "Sewers" (For sneaky, tho unpredictable infiltrating fun). Playing space should hopefully be packed with houses, so I expect A LOT of infantry lists.

For my own list, I've gone with the 8th Army Infantry (Italy) out of the North Africa book. I'll post up more on what my list contained and who I played in my next post, including a report of my resounding victory [not]! So for this tournament, I only had one platoon to paint up to field a fully painted force - a requirement according to my Pride and Ego - ugly buggers at the best of times. I wanted some elite infantry in my list so bought some Mid War Commandos. These boys are flipping cool models with even cooler rules. a 2+ in assaults has seen them carve through german grenadiers in practice games and I can't wait to try them out on Saturday.

Here's a phone camera picture, I'll take better ones after the tournament:

I've also been slowly, slowly picking up all the pieces for my planned German "Kampfgruppe Arnheim" list so I'll have that "bad guys" force to play against my son in teaching games. Pak40's, Jagdpanzers, "SS" this and that - just to have really bad, guys. Not sure when I'll get around to painting them though. :P

Lastly, My Kickstarter stuff from the Relic Knights Kickstarter finally arrived and I've been gluing together all my scantily-clad anime racer girls from the Cersi Speed Circuit faction. I've only fumbled through one game so far with my mate who also went in on the Kickstarter and thus far I like what I have played. The game is a refreshing change from regular rules sets and I really like the setting too. I'll be reporting more on this on a separate blog altogether along with links to a podcast I'll be co-hosting with a forum mate dedicated to the game Relic Knights itself. Links will be forthcoming as and when I have them ready.