Confederate Brigade (And some other things)

It’s been a bit quiet on the hobby desk of late in Chateaux Dai. Moments to pick up a paint brush have been a bit few and far between in the past… 2 weeks or so since my last post. Until that is, this weekend….

Not much done mind, but enough for a wee post I think. First off, the flags I ordered from Stone Mountain Miniatures arrived for my Confederates. Of course, silly ol’ me neglected to order some classic Army of North Virginia “Diagonal Blue stripes over Orange background” Stainless Banners (Not that every Southern army born them in any case, but they are certainly instantly recognisable)… But they do have some earlier “Stars’n’Bars” efforts for the now (And a Florida State flag.) which will serve for our earlier games in mine and Stewarts’ (Who’s playing the Union boys) campaign next month.


Better pics of the starting Brigade were promised and here they are – the campaign will follow a fictional duel between two brigades over the years of the war in 9 meetings (Per the Longstreet “Grand Campaign” rules.). The Campaign encourages that we both name our Brigade commanding General and it’s component regiments, which I’ve done below. Each side begins the campaign with 3 infantry regiments of 10 bases, 1 cavalry regiment of 8 bases and a 3-gun battery of artillery.


Stewart and I will get the first games of our campaign started on June 18th in a day long (thedaybefore)Fathers Day gaming extravaganza! AAR to be posted thereafter.

I also finished up a couple of Dark ages figs - a Saxon Thegn and a Jomsviking Warrior. 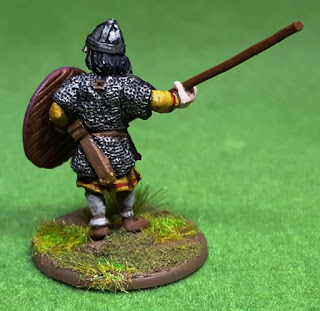 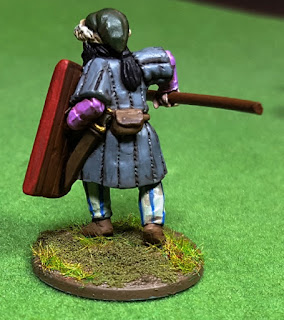 Some work got done on my commission too. A 40K metal Ogryn and a sculpt that's pretty fun to paint. I liked this version of the Ogryns as they were less cartoony than their previous releases. Still to do armour/metal plates and ammo-belts. No idea what colour to paint the plates though...?

And last, but certainly not least - I finally (After a year of sitting on my shelf) fixed my mate Dave's Heroclix Great Cthulhu mini/statue. This thing's huge! It was handed to me after his son and my own were sneaking into Dave's hobby room (Whilst we played Kingdom Death) and one of the little sods knocked it off it's shelf, breaking off the wing... Dave tried to fix it with some pinning and wire, but the wing was far too heavy and it bent right off in no time. So I offered to sort it out and with a wood screw and some grey stuff (dries harder than Greenstuff) along with a little paint on the putty it looks pretty good and as long as it's not dropped again, should stay on there for years to come!

And that's it for now. The Ogryn commission is my priority right now, then back to some more Confederates in case my brigade is lucky enough to receive reinforcements between games in the upcoming campaign. But otherwise, my focus will be 28mm Soviets for Bolt Action.

This weekend I got the finishing touches and basing done on my third Confederate Infantry Regiment. I also painted up another General a couple of Sharpshooters markers and constructed and based a set of 4Ground "snake fencing".

I've not enough regimens painted for a fully painted Force to be able to play in a Longstreet Grand campaign. It's been awhile since I have been able to claim to have a fully painted army! Saying that, there are additions sat waiting to be painted but they don't need to be done just yet.

As with the other two infantry regiments, no flag for the standard Bearer and in fact I'm waiting for them to be delivered sometime this week and will preview a full Army shot once I have them glued to the flag-poles.

I've also started work on the commission I mentioned in my last entry and I'll post up on that next.

This week saw me putting the finishing touches to my 2nd ACW Confederate infantry regiment and getting a 3rd regiment to around 60% completed. I also got started on a small painting commission for a work-mate (I know, I said I wouldn't do commissions anymore *sigh*) that I'll stick up in a future post.

Once again, a flag will be added once all regiments are painted.


For some reason I was under the impression that I'd need 4 infantry regiments painted up to be able to start playing in a Longstreet campaign, but I was corrected by Stewart who informed me I only need 3. Far more palatable and paint-able. (Is that even a word?) Hope to have that 3rd regiment done and ready for pictures before the weekend and then it's back to painting Winter Soviets as Densmol just got some German Fallschirmjager and is furiously painting them up ready to play some more Bolt Action!
Posted by Dai at 13:21 14 comments: