It's not Necromunda, but close enough.

Still, I was rather excited when GW unexpectedly came out with this (not) Necromunda reboot and so I preordered the rules, my first proper GW purchase in a long time. Necromunda was my fav Games Workshop game to play as a teen and with all the up-until-now unused 40K minis in my bits boxes I won’t have to buy anything new just to play. Just need suitable terrain. Add to the fact that Sean (Seans Wargames Cornerblog) and Lasgunpacker (His blog) are planning to come over on the 1st weekend of June for a game or two and I feel I have just the inspiration I need to get working on stuff for the day. It's nice to have something concrete to work toward rather than just the notion that "my unpainted pile needs to get worked on".

For the event, I plan to run an Inquisitor's Killteam so I can use a mix of different characters. I think along with the Genestealer cultists that they have the most interesting and varied options to muck about with during team generation. More on these in a later post. 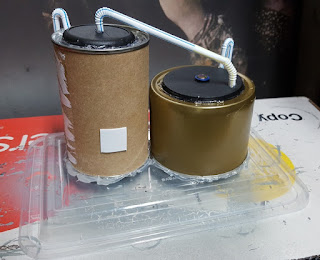