No hobby progress for this week past. I did add a splash of flesh colour to a handful of Winter Grenadiers, but that was it. Instead, I watched Black Panther with my son (Really fun) and played video games (The death of all hobby forward progress.... dun dun dun....).

Post Captain is an Age of Sail rules set (Stew did a smashing review on them over at his blog) for 1700's era-ish naval battles. It's involved, but not so convoluted in specific teeny rules that there's a lack of flow in how the game plays.

Stew got to came over with his gorgeous tall ships and we played a fun game of British (Me) versus the French (Stew), with two ships to control each. This was my 2nd time playing the game and after the first turn we pretty much had a good flow for each turn.

Here's some pics of the game in lieu of me boring you with a detailed (As detailed as this addled memory could provide) run down. In the end, the French 3rd rate  (Smaller ship) took a relatively minor beating and struck the white flag early on, which was unlucky for Stew. Then after that, it was a small matter of pounding the remaining French 1st Rate into submission.

As history would show us, Britannia rules the waves! (This time.)

The last two troopers from my Winter SS squad were finished up this long weekend - the ammo carrier for my previously previewed LMG bloke and a cheeky crouching SMG trooper. Now they just need their Half-track painted up to cart them about the battlefield! Once again, I went with Oak Leaf camo that I think turned out okay on their uniforms and Pea Dot on their rolled up thingies strapped to their back. I really like Warlord metal minis, they've got some really good sculptors making lovely dynamic poses and full of character. 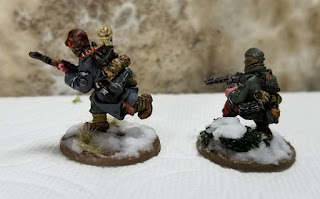 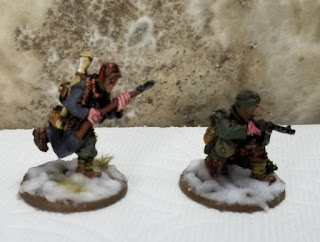 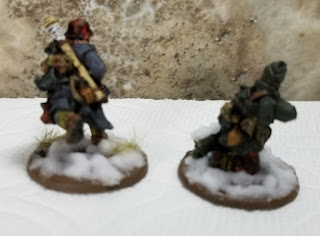 I've since started on my Heer Grenadiers squad and the platoon medic. Far less camo on these chaps, so they should paint up for more swiftly. Hope to have a post up on those later this week.

Next up is a small cabin by Charliefoxtrot Models. Cute little mdf kit that was exceedingly simple to build. I kept the paint scheme simple as well as the snow effects. I wish I could add Icicles (To all my Winter houses infact), but they'd not be very convenient for gaming purposes. 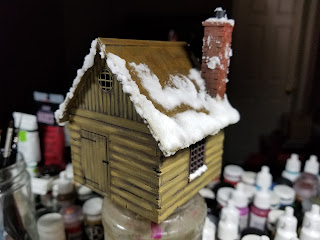 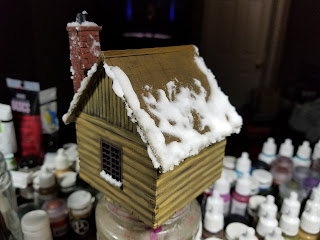 Lastly, a kind gift arrived in the mail from a papanurgle forum mate in the UK to help fill out my daemons ranks so I can have enough ready to be able to play a game of Warhammer 40k with 8th Edition. Some 2000-and-something Pestigor beastmen that will be counts-as Plaguebearers and some beautiful 1st release Nurglings, enough to make 3 bases (Meaning I'll be able to plop down 6 total.). Some of my fav Nurgle models here - can't wait to get painting on these. (After, of course, I finish my Germans!) 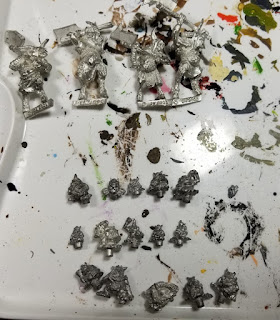 This coming weekend will also see my good friend Stew (Check out his blog!) coming over for some Age of Sail action. Not sure what rules we'll be  playing, but be sure to see a little write-up on the game thereafter.
Posted by Dai at 13:00 24 comments:

Last weekend was a somber affair. The previous Thursday, my mother-in-law finally succumbed to the cancer in her poor system so the whole household was in an understandable funk. Mom picked a good time to pop her clogs though as it was President's Day on monday, so we all had a long weekend to get ourselves back out of the miserables and get back to work/school.

Staying at home for so long also allowed me to distract myself from feeling down and get some more painting done on my Winter Germans.

These three fellows are more members of my planned 7-man SS-Grenadiers squad, two of which allowed me to practice some more on "scary" german camo schemes, in this case Autumn Oak Leaf Pattern, which was not nearly so labour-intenstive as the Pea Dot camo I previewed in my last post. 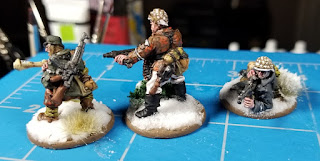 The title mentions some scatter terrain, and who ever wrote that wasn't lying. I also randomly picked up a plastic Dumpster (By Reaper Miniatures) for my modern zombie survival project and painted it the ugliest green I own, which is close enough to the actual Dark Green that I see them painted up as in real life. The lid is designed to be able to be opened, but I glued it down. No need to risk zombies climbing inside when I'm not looking.

Still two SS troopers to go, watch for an update on those. Also this weekend I am playing in a Market Garden huge game that I'm pretty excited for, so hopefully I'll remember to take some pics of how that went and post them here.

Past couple days allowed me to do lots of work, especially as my son announced that he had re-found his painting mojo! Never one to dillydally when father&son painting ops are on the menu, we have gotten down to quite a bit of work.

First off, to join Squad Sergeant Schmidt (shown in my last post), here is Schütze Dresler. Realised that the main reason I'd been avoiding these germans was due to having to work on their tricky camo patterns! Well, no more. Dresler here is sporting a pair of nifty SS issued Pea Dot camo trousers. Think i got the pattern and colours right. Regardless, he'll do for gaming.
This sculpt originally seemed like it would have been fun to paint up, but his face! Stupid bulging eyes in a poorly defined face was a nightmare to finish up and in the end i just suffered the eyes as is after 4 attempts to try to lessen the bulging effect. 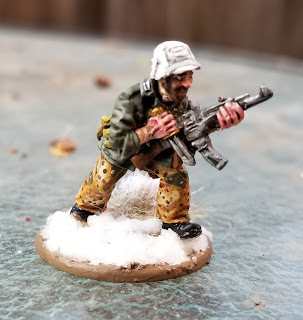 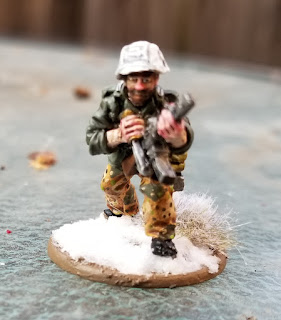 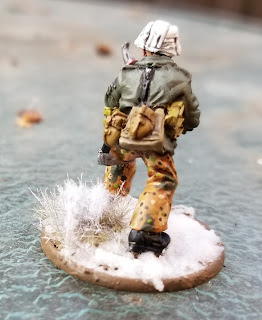 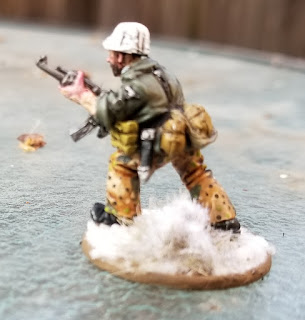 As well as him, i also finished up the counterpart ruin to the one shown in my last post.  Just a quick base, wash and quick drybrush highlight  then snow effects added. Lighting is a bit pants, but you get the idea. 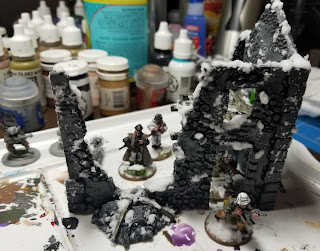 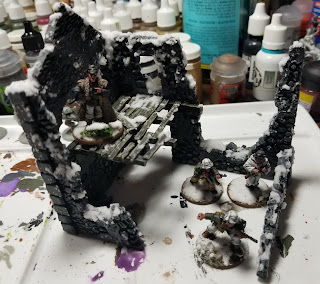 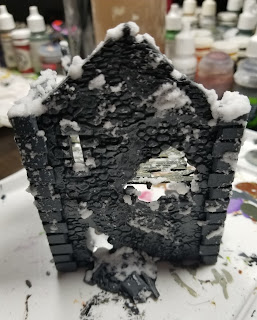 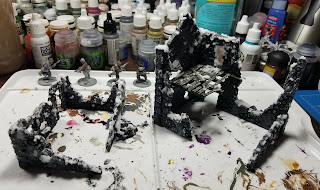 I also added snow to my deciduous trees. Just a few brown leaves to add here and there and they'll be ready for varnishing and can be called game worthy! 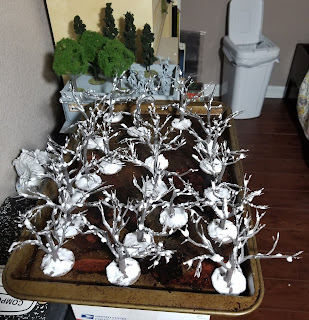 Did someone mention spiders? Yeah, those three are done and ready to be thrown at adventurers in my rpg sessions. Just simple layers of washes with a wee purple highlight on legs joints to make them stand out more. 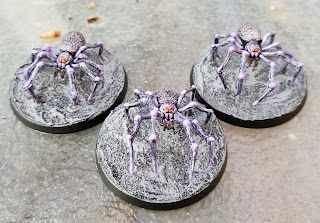 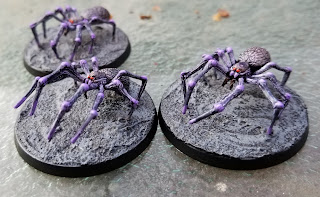 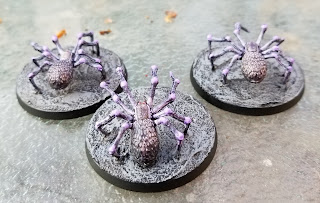 Wait, "who were those fellows also on the paint desk, behind the ruin?" Glad you asked. These are the remainder of my SS squad in various stages of paint that I'm currently working on.

Been a quiet week on the hobby front, but I got a bit done.

This is the first part of my Warlord Games’ Ruined Farmhouse kit. I made it into some sort of shed or workshop – well, the remains of one long abandoned.

The kit has some nice details and is mostly modular though I find that there aren’t very many “good” configurations available, so it looks much like most every other version of this kit I think. Also has some pretty ugly mold lines that were tough to remove to the point that I left them completely alone on the main house part of these ruins. The plastic that these models are cast in is not very conducive to mold-line clean up, much like that nasty Restic crap. Regardless, I think it came out okay and should provide some nice hard cover for my Winter board setup.