Been having some technical issues trying to get this post up, so apologies for the radio silence of late. Let's get on with the show, eh?


Dave over at the Wargmesculptor Blog announced he was starting a small challenge for any who wanted to sign up to get some or their scenery/terrain pieces built and painted in an effort to help get rid of our backlogs. So, I jumped in and decided I'd give it a go. 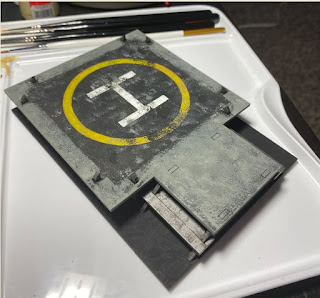 A Sarissa Precision mdf Helipad for my modern day zombies game that one day WILL be played, promise. Simple kit and even more simple paint job - will do for my table. Was inspired by the Left 4 Dead video games where the goal was to get to the helipad whilst fighting off masses of undead - best Zombie video games ever I feel. 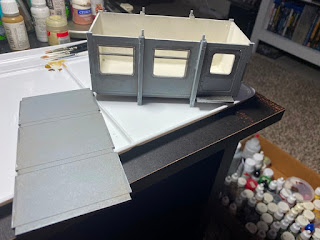 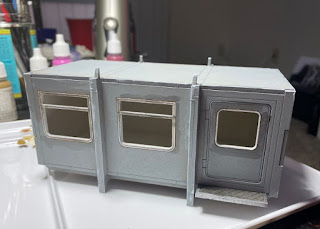 A Mobile Office also in mdf by Sarissa Precision. Trickier to put together with those vertical struts, but looks good on the table. Same as the helipad, kept the paintjob very simple which also got it off my table swiftly. Thinking some day in the future to make a white board and find office furniture for the interior. 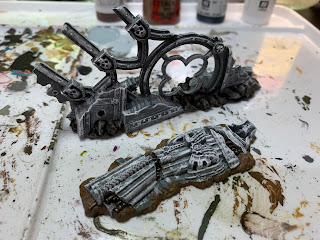 These two are a couple of Warhammer 40K ruins scatter pieces. Very simple drybrush paintjobs. I have another 7 or 8 pieces to go with these two recently primed. The Statue is from the now out of print Urban Conquest Warhammer 40K expansion and the ruins behind it are the last of the 3 piece also out of print Honoured Imperium scenic set that included the previously posted Statue and giant Aquila that I'd painted up. These two small 28mm resin WW2 stockpiles can be used as either objectives or scatter terrain. They were a kind gift a long time ago from the estimable Stew (Click his name to see his very cool blog) after he ordered the Chain of Command rules and realized he had no intention of playing in 28mm! I have two others in the painting queue as well. 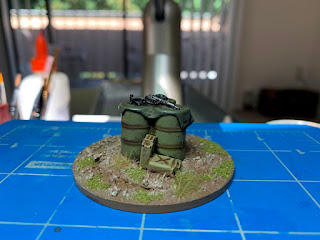 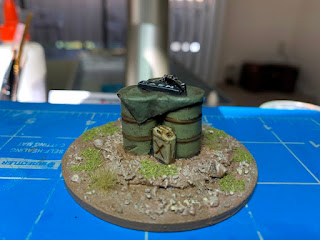 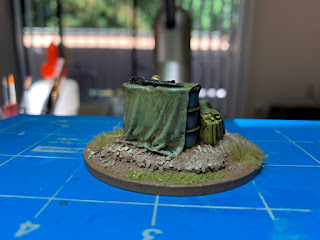 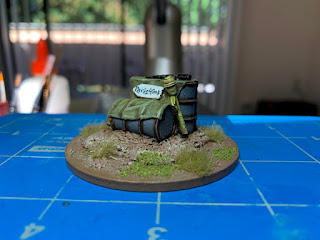 I tried to add a little interest with the poorly painted signs, but otherwise they are very simple paintjobs and based to be suitable for both winter or greener seasonal games.


Did you see the two Brit troops in that first pic? Yeah, I painted those up too. Here's some better pics. 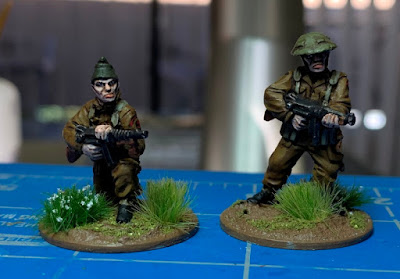 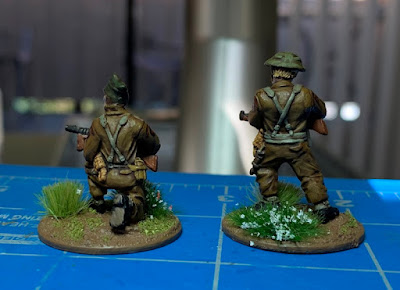 ﻿These two are some more Commandos (Toting iconic Tommy guns) for my Dieppe Raid project. The helmeted chap I believe is by Blacktree and the kneeling Wargames Foundry. Both decent sculpts in their own rights. These two bring me up to 6 out of 8 done for my first squad. Lots still to go! 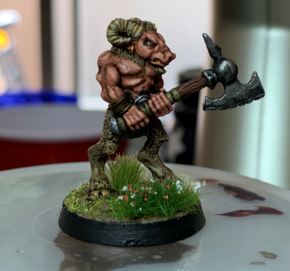 Last painted piece to show off is a small "Palette Cleanser" mini to help keep the mojo going. This chap is a Citadel Miniatures Beastman from 1980-something-or-rather. Had him since I were a young lad and he deserved to be painted up a long time before now but at least he's ready for... I dunno - not really sure how I'll use this one.

To finish up I also managed to stick together the last 10-man Brood Brothers squad for my Genestealer Cult and also a couple fun minis to make up a Rogue Trader and her retinue (Just for gits and shiggles really).

Old 1980's Imperial Guard plastics mixed with more recent plastic Cadian bits and Genestealer Cult heads and nicknacks. Now I have three of these squads assembled, they just need some gap filling here and there and I can get to their basing so they can be primed. 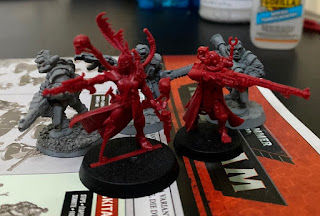 Got the pistol toting Rogue Trader off a nice Ebay cheapie auction. Liked the character when they first showed her off from their first Blackstone Fortress expansion or something. The red chap to her right is an Adeptus Mechanicus trooper. I felt he'd make for a good right-hand-man. Those three primed-grey fellows in the rear are old 1980's Citadel Miniatures Chainsaw Warriors from a very much out-of-print game. They'll be her muscle I think.

And that's it - long post, but I guess that's what happens when one doesn't post for over a month (!!!). Stay healthy and safe out there!