Not been totally idle though.

1. Remember those old Rogue Trader Guard I scored and bragged about a couple posts back? Well they have all been clipped from their sprues and sorted into some wee containers I managed to drum up, ready for when I finally get to them. I also added in the other Guard that I’d already owned and I think I should be able to put together about three or four 10-man squads along with some extras to fill out both heavy weapon teams and platoon squad members. Score right?

2. Speaking of Guard, I read in some blog that I was too silly to bookmark about a Guard player who had found an awesomely cheap alternate model to use instead of the $30+ GW Chimera model. The blogger had chopped the gun off the turret (Or maybe replaced the entire turret?) and shoved on a GW gun instead and added a few 40K-esque details on top of that. I only saw pre-paint pictures of the finished tank, but I liked what I saw and the price of the finished piece even more! On top of the blogger’s mods, I plan to switch out the abominable wheels for something more beefy, though have yet to find an affordable option for this. (Prefer a wheeled transport as opposed to tracked, just seems meaner to me.) This is the shop where I plan to buy 4 of these to make my armoured platoon – http://littlegreenmentoys.com/Tim-Mee-Tan-Armored-Car-02-0001.htm and here’s a pic of the piece pre-mod:

3. O and painting! Well yes, I’ve also managed to get some painting in too. The hobby room got flooded a couple weeks back (Along with the upstairs landing.), which was rather annoying and will prove to be an expensive fix I fear. Thankfully only the flooring was affected so I’ve been able to go in and work, though not often due to the fact that my wife doesn’t like going in there with bare floors. But I have gotten some painting done: a. Work on the Brother Captain Stern commission has started and I’ve got the base metallics started. Customer wants a similar scheme to the studio one, so red next.

b. My Raven Guard dreadnought and Captain Sicarius models have been primed black. Doubt I’ll get to Sicarius anytime soon, but the dreadnought has been calling to me for some reason of late.

c. I am close to finishing the paintjob on the Ogryn from the Radical Ordo Malleus team for my =][=munda project. Shading and all sorts is done on almost all areas of the fig, just need to break up the large bare areas of skin with some freehand tattoo’s and scars. The scars are going to represent his former slave status and will hopefully look as though he’s been lashed a good few times. With the tattoos I’m hoping to effect a design that reflects some sort of devotion to the God Emperor with script work or Inquisitorial seal-type imagery. I’m rather intimidated by the prospect though so we’ll see just how well it all turns out. Hopefully will have an update with pictures by Sunday.

4. Someone needs to take down Kickstarter by the way – along with the awesome Sedition Wars KS, I also have found myself putting down some $$$ on the Relic Knights KS with a mate. And now I’m drooling over the lovely Dreamforge plastic Eisenkern trooper boxed sets and Leviathan titan-thingy. It’s a good thing I have the thriftiest budget-conscious wife in the world, else I’d be in the hole terminally if my hobby urges were allowed to have free reign.

5. Lastly, a mate recently found this boxed set from his gaming days of yore. He knew I am a painter and (still) a roleplay gamer and so gifted me it along with a handful of hero-esque miniatures from the same age. Can’t wait to get painting those pig-faced orcs! (After the commission. After the Ogryn. After the dreadnought. Etc. Etc. Etc.) 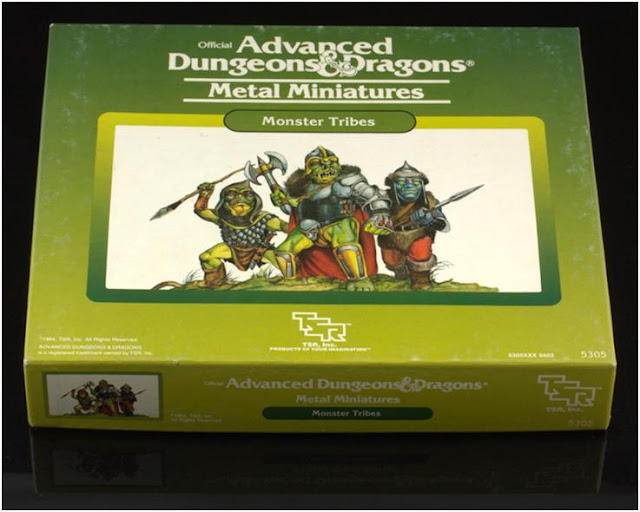 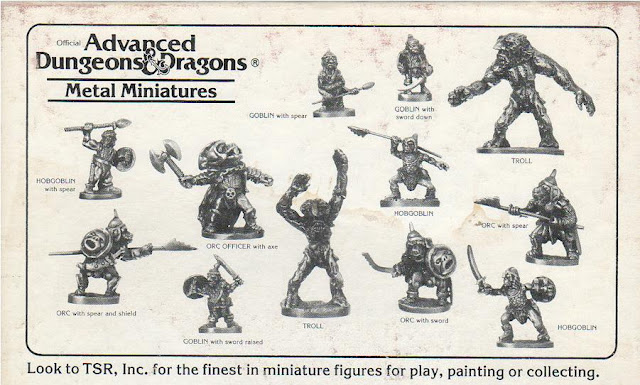 Again, next update with actual hobby pics will sometime before the end of Sunday.
Posted by Dai at 14:29 4 comments:

And Let Slip the Goats of War!

A hobby room with no tiles or carpet isn't really a place I feel comfortable painting in, so I haven't. I did manage o finish off the beastmen though downstairs in front of the telly whilst me and the missus watched various films this past week. So here ya go, the Beastmen Penitents are done. Tabletop level of paint as I've just got too many more units to work through, but even then I think I spent too much time trying to get them done. :)

They're all made from Catachan Guardsmen and plastic Gor parts. I sawed off the Guard boots, and the Gor lower legs and glued them on this took an absolute age to do and do right so they didn't look way out of proportion and completely naff.

Most of the models have Guard torsos and arms and Beastman heads. Obviously the kits don't match up perfectly and so some of the horns and hair on the Gor heads caused the fitting of the guard arms to not match up so well; so there's a few models where an arm might be a little out of place. (But they're mutants, so really didn't bug me as much as it would if they had been humans, right?)

Here's the 1st three. I the fellow on the right's legs didn't allow for "hoof-removal" and so I just left him with the Gor legs, which was okay and added a little extra variety in the unit. 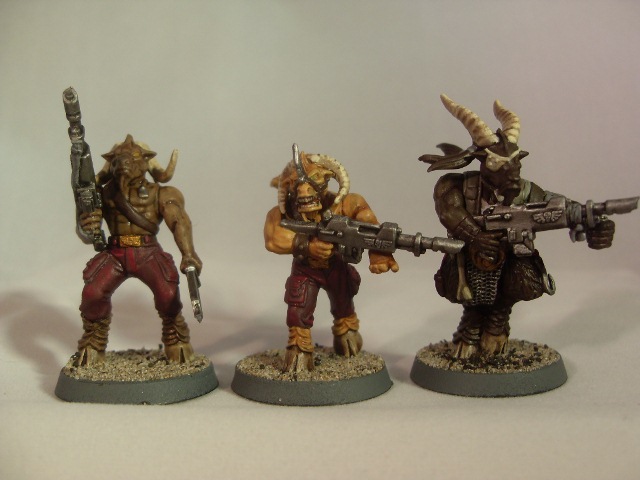 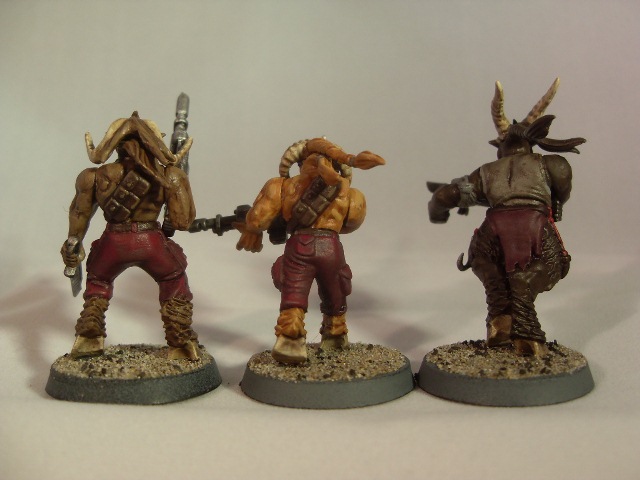 Next 3, I particularly like the scar-face on the right - that's some real attitude there! 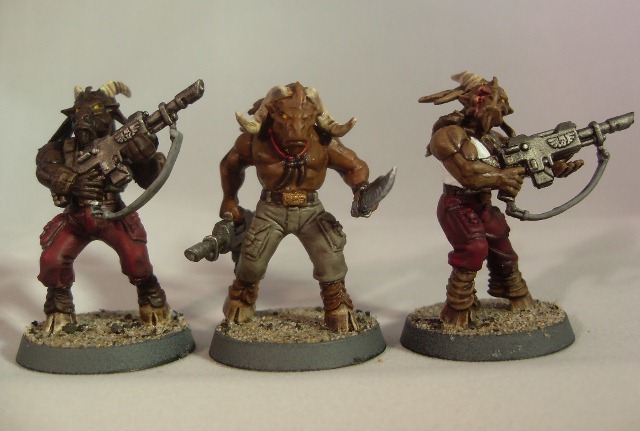 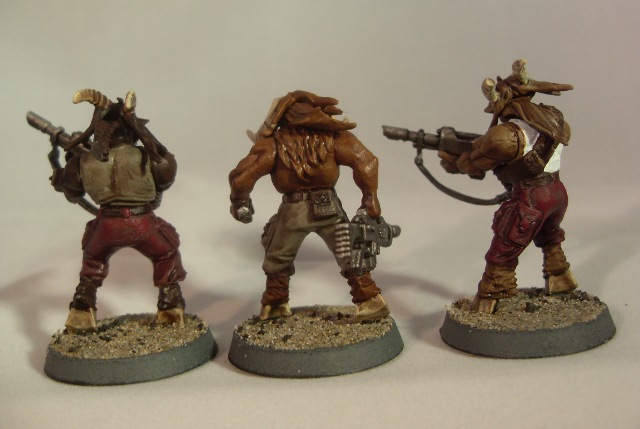 I'm trying to figure out if the one in the middle of these three is burping, or bellowing. I'd like to think burping, just cos it's more amusing. :) 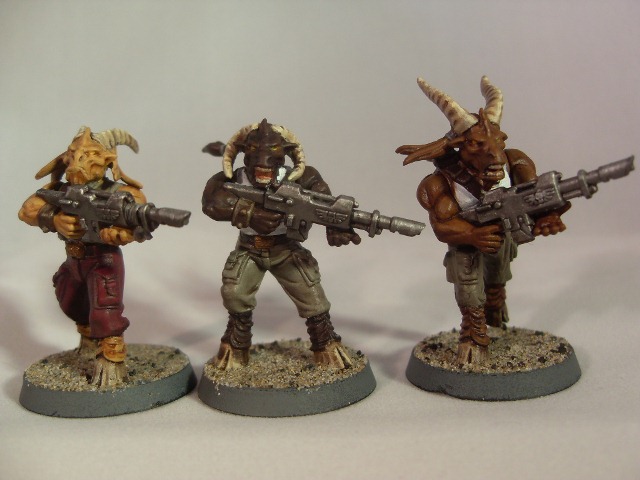 The white's of the wife-beater shirts is not as bright as this picture makes them out to be. Promise. 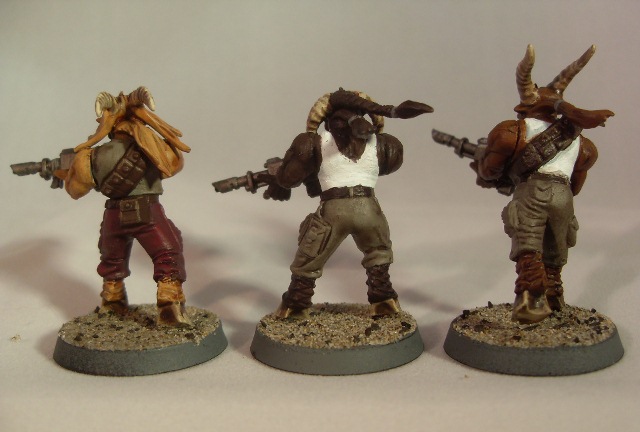 And so were I to play a game of 40K, these beastmen would count as a Penal Legion unit, so here they are all arrayed together with their bad arse Custodian, Sergeant Lorch. (He must be a mean one if his diminutive sized self can keep this burly lot in line!) 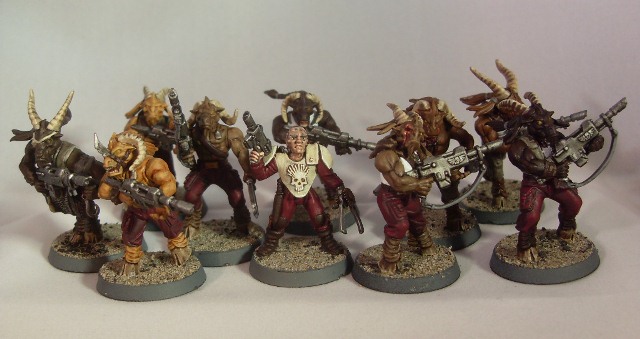 And lastly a closeup to show that Lorch really does fit in just fine. 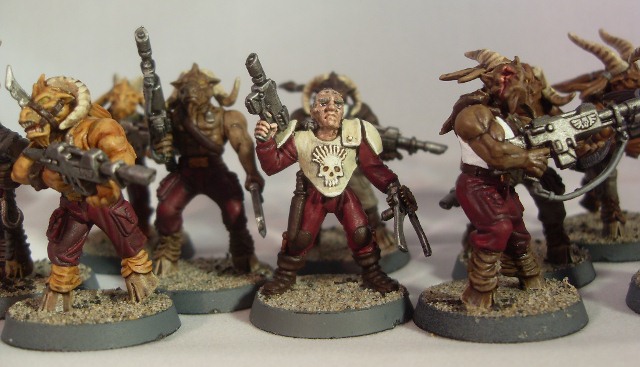 So I've come into possession of a little pot of gold today from a very cool mate who is a worse hoarder than anyone I know. And I'm thankful for it. :)
(Call me the happiest old-school-40K-gamer ever right now.)

I'll let the pics do the talking on this one. 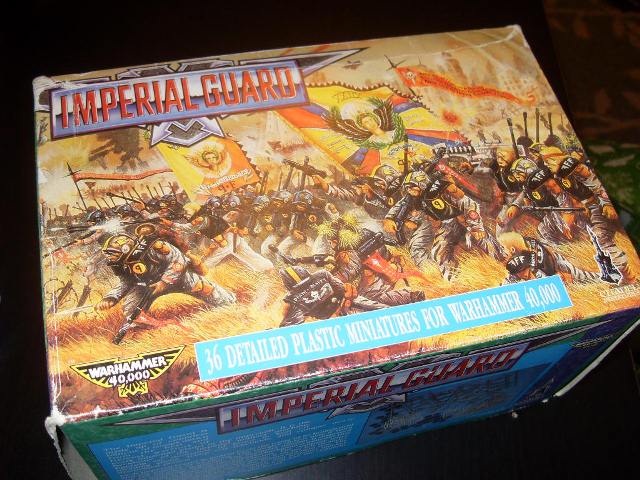 It doesn't show in the pic, but there's only two guardsmen missing from these sprues. 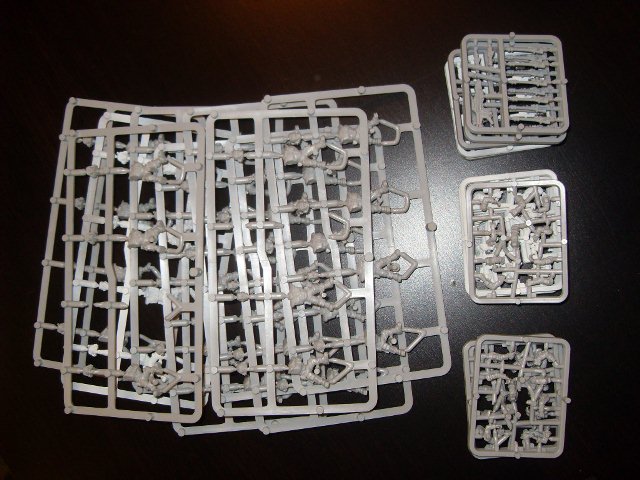 My Rogue Trader's House Guard just got some reinforcements!
Posted by Dai at 20:22 9 comments:

Lapse in posting due to wonderful flooding of hobby room experience thanks to shite washingmachine.

Along with other real life rubbish, sitting is about all I'm willing to do right now.

Shame though, seeing as Beastmen Penitents were about one painting session from being completed.