Paul, owner of Rotten Factory Miniatures has today started up his own Kickstarter type campaign on the Polish site www.wspieram.to.

*click the blow image to get to the wspieram campaign*

I've been following the progress of the WIP's for his sculpts on the Papanurgle.com forums and have eagerly awaited the chance to be able to put some $$$ into this project to help him get these mass produced and to be able to paint some up for my own collection!

His vision for these sculpts is a GW Nurgle-type, diseased fantasy warriors style, but more finely detailed, more grown up, not over the top gore and goo - and what he's created so far is fantastic imo.

Help the feller out and put some cash in to help him make his dream of getting his sculpts produced!

My first game of Longstreet

I found out about Longstreet via the excellent blog by the Mad Padre and his wonderfully written and flavourful battle reports.

Longstreet is arules set by Sam Mustafa for battles of the American Civil War. It’s a little different from your regular run-of-the-mill wargames rules set in that it uses both a dice mechanic to hit & damage and a card deck to make different things happen, modify dice rolls and/or just mess completely with your opponent’s turn in general. I played yesterday with my mate Stewart for our first time through with the rules using our (WIP) 15mm miniature collections – Stewart playing the Federal troops in their fine Blue uniforms and myself as the Confederate rebels in their motley browns and greys.

*Due to our limited (for now) ACW miniature collections, white foamcore was cut to the basing size as proxied regiments. Apologies.*

We decided to set our game in 1863 as it would be the most balanced of the years from the Civil War, meaning ruleswise that neither had any real advantage over the other. It was a learning game afterall and we just wanted to try to learn the basic mechanics of the rules. Each force was made up of 4 infantry regiments of 10 stands each, a 3 gun artillery battery of 2x 6-pounders and a howitzer and a Cavalry Regiment of 8 stands. (These force lists are also the same starting armies used in Longstreet’s campaign rules – which we certainly plan to get started…sometime in June I believe.)

The table was set up right out of the book using the Meeting Engagement scenario, with a road running diagonally from one corner to the other, a couple of forests, a corn field and a hill. We then chose to draw 3 terrain cards or choose a fence/wall, etc or a mixture of them and added a couple extra features. In this case, we added more fences and a small swampy area.

The game took a while as we had a little rules searching to do throughout, but the basics were easy enough to pick up and the card deck really added a lot of flavour. We did forget some of the rules, like when Heroes are added and so forth, but we had a blast anyhow. I’m excited to get another game in!

Per usual, instead of rambling on turn-by-turn, here’s pictures from the game with a caption or seven to tell you what went on. Next update will be in the following couple of days, as I’ve just the basing to do on that second regiment before it’s called “done”.

The original plan for my 15mm ACW project was to collect a force large enough to play against my friend Stewart's Union Brigades using the Regimental Fire & Fury rules set. In these rules, should your games end up being played at a Divisional level, then one requires a Divisional HQ base to represent your high ranking commanders who are making all of the big decisions.

Whilst I'm still a L-O-N-G way away from being able to play a game at that level with painted troops, I thought that this weekend I'd put together and paint up a Div HQ base so that I'd at least have one ready and also to break up the horrid monotony of batch painting CSA infantry!


I'm hoping the 2nd regiment will be done by Sunday afternoon as Stewart and I are to play our first game of Longstreet. I'll post up an AAR Monday or so.
Posted by Dai at 13:39 14 comments:

This weekend I was lucky enough to play three small games of Bolt Action and finish up basing and painting my first 15mm ACW Infantry Regiment.

The Civil War minis are by Blue Moon 95% and other unknown manufacturers 5%. No flag on the banner bearer model as I plan to get some printed once all my regiments are painted and playable.

Finishing these prompted me to paint up another general model. This fellow is waving his saber about in an enthusiastic fashion tho I fear he'll be biting Minie ball sitting so high in his stirrups. 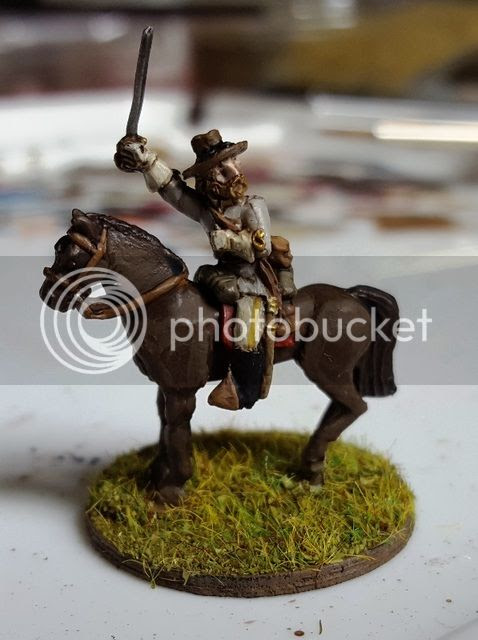 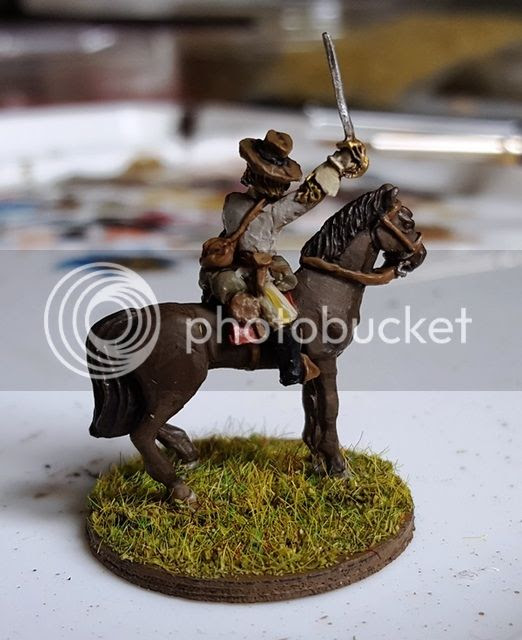 My first three games of Bolt Action were learning games, so small and few special rules to worry about.
The first was played Friday evening versus new gaming pal, Travis. We met at our LGS and he brought all the terrain and both armies for the game. (He played German Grenadiers and I British infantry.) Each force was comprised with a 2nd Lieutenant+Adjutant, 3 infantry squads with LMG's, two lorry transports,  Medium Machinegun, Sniper team, a tank each and Medium Mortar team+Spotter for the Brits and Infantry Support gun for the Germans. The lists were played were of Regular quality and the mission we played was Demolition - where we each had to try to reach an objective in our opponent's deployment zone before turn 6. (I think)

Per usual, here are some pics to indicate how the game went.

In the end I threw in the towel. All of my infantry units were dead or pinned beyond usefulness and I had no way to stop the rampaging Hetzer. I had a lot of fun though and even though the Bolt Action rules seem almost “cartoony” in how they go about wargaming, they were fun and it was cool to push 28mm World War 2 units about the table. The rules set does need a few tweaks though and I am aware of the WWPD Bolt Action Alliance unofficial changes to the rules that are being used around the world at different tournament venues that sound like they address quite a few of my issues, so maybe once I have the rules down more-so, I’ll affect some of their changes?

The morning after this game, my good mate Densmol come over so I could show him what I’d learnt the night before. I convinced him to get into Flames of War and now I’ve convinced him to join me in my Bolt Action endeavours. He of course, has chosen to play Germans again….

We played two small games on a 3’x4’ set up in my garage with two mostly equal forces of two squads each plus a 2nd Lieutenant+Adjutant, he took a Medium Mortar and I a Medium Machinegun. (I was now playing Soviets, so with their National rule, I also got to play with a 3rd squad, though it was Inexperienced in quality level). Both our forces were rated Regulars otherwise. 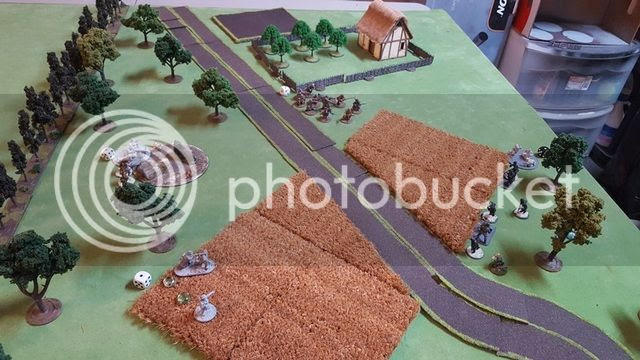 Sadly pictures for this game were not so exciting as I was proxying most of my Soviet force and Densmol’s own Germans were primed black, so only the one picture to just show you the table setup.

Both games were hotly contested and resulted in me winning the first and he the second. I think both were just played as plain old Maximum Attrition mission which is pure versus with no objectives involved or special rules.

Densmol liked the game so much he went and purchased off Ebay some large Fallschirmjager (German Paratroopers) army so now we’re both fully invested. This means, expect some Bolt Action reports posted up in the future – well, once we paint up enough stuff to be able to play a game worth looking at!

Health issues of late have again stymied my efforts to get stuff done, but I did get some few things done.

I painted up these Renedra plastic Wattle Fencing pieces for my 28mm Dark Ages project (That I believe could also be used in Bolt Action WW2 at a stretch?). The designs were very crisp and easy to clip and clean up from the sprues and painted up easily with a dark brown spray of enamel household paint and dry-brushed with some P3 Trollblood something-or-other named grey. I then spray varnished with first gloss varnish and then once dried, Testor’s Dulcote. The small dirt areas also got a swift drybrush with a mud colour. I’m still trying to decide whether I’ll add some flock or the odd grass tuft or not?

No pictures as yet, but I’ve also been working on my first 15mm ACW Infantry Regiment. They are just needing basing and the odd highlight here and there until I can call them done. It suddenly got a lot easier to paint them when I ceased to worry about all the normal attention to detail I’d put into my 15mm WW2 Commonwealth infantry. It’s made the whole process far easier to stomach, as I find batch painting to be an ‘orrible slog….

Hopefully will have a post up of the finished regiment in the next day or two.

Lastly, I’ve got my first game of Bolt Action set for tomorrow evening. New gaming pal, Travis is supplying the armies for a learner game at our LGS and I’m really excited. Along with this, I’ve also a learning game of Bolt Action to play against my mate Densmol with our unpainted forces arranged for Saturday morning. So maybe some AAR’s and pictures forthcoming of both!?