Finished my Vickers Heavy Machine Gun platoon. In the future I'd like to include some HMG Carriers for them. (These sculpts are by Forged in Battle. Okay details, though somewhat blocky and chunkier than Battlefront's.) 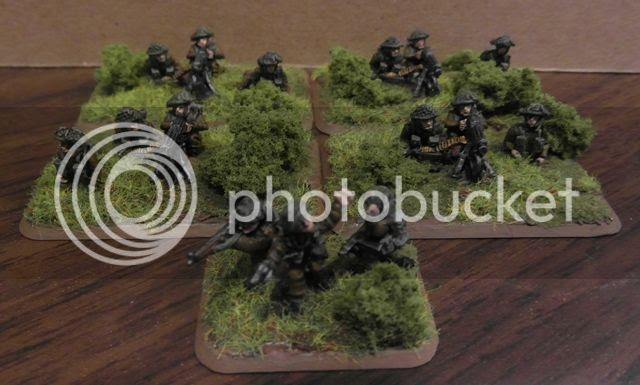 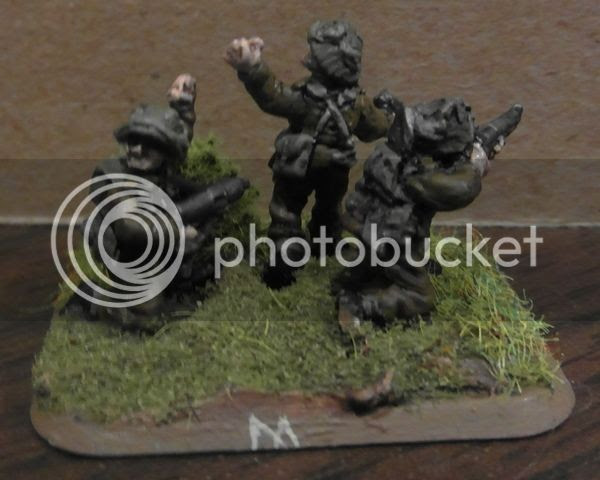 And Admiral Drax was asking for some better pics of my Heavy Mortars. These are Battlefront's own Brits in Italy sculpts. I like them lots due to their lack of jackets and sleeves rolled up. Nice details.

Painted things and another Tournament

Greetings from the far off land of allergies and drought.

Over all, I had a really fun day, though only won one of my three games. Here's a swift round up.

Round One had me up against Brad and a bloody horrible list with 6 Konigstigers and some AA vehicles that didn't come into play. Of course there were delayed and scattered reserves (No roll for reserves until turn 3 and on a random place on my table edge!!!) involved, so only half our forces were able to start on the table, the other half being rolled for later on. Seeing as he only had two platoons, he stuck his 1ic & 2ic Konigstigers and his platoon of.... 4 more Konigstigers (KT for short.), leaving his AA guns in reserve. I chose to place two of the Sherman platoons down and kept the third and the M10 platoon in reserve. If you haven't already guessed or are clueless as to what this situation is, I started the game facing 1800 of Brad's 2000 with only 850 points worth of my own. Trouble from the start.
He camped his 1ic and 2ic on his objective and had his platoon in position to move toward the objective in my deployment zone. I figured I'd only have a chance at all versus his 40" range and armour 15 front tanks, if I ignored the platoon of KT's and rush my whole starting force (10 tin can Shermans and fireflys) at his defended objective, hoping that come turn 3, I'd be lucky enough to have taken his objective and roll for one single platoon to come contest versus his KT platoon. Funnily enough, my rush of wee tanks rushed through and killed off his 1ic and 2ic and holding the objective. Unfortunately, what happened next was a fine example of Piss Poor Planning/Preparation on my part and I totally shot my self in the foot, losing the game.
I rolled on turn three to get a reserve platoon and lucky day of all luck days I got one! So i grab my M10's with their big Tiger killing guns hoping to shoot his big cats off the objective and look to see where they deploy. Okay, 1-2 was rolled, so my bottom left corner, not perfect, but hopefully I can maneuver well enough to get the job done. Here's where it went wrong - neither of us could figure out just how big the deployment zone was and saw mistakenly 8" from the corner. So sadly, I couldn't get close enough to the objective to contest and I was only able to kill two KT's, losing the game. Deal was, reserves actually come in on 16" from the corner..... *facepalm* O well, lesson learned. So this was a sad 1-6. (O and my planes did bugger all through the game.... You'll see a pattern here.)

Round Two was a fateful showdown versus my Flames of War mentor, Eric Riha (Often mentioned on the wwpd.net podcast.) and his American Patton list. This game was over before it started. My dice were abysmal and Patton's Spearhead moves (Everything in his line of sight get's a pre-1st turn move, like a recce team = shenanigans) had Eric's tank platoons in my grill almost turn one. By the time I was able to roll for reserves (Again on turn 3 - damn you delayed reserves!!!!), I had already lost enough in my army and was forced to have to roll (And fail) a Company Morale test and the game was done. Another 1-6, but at least this time it was both against a far superior player than I and not due to my own lack of preparation.

Round Three saw me going in tied for last place in the rankings. Seriously?! *sighs* I was to face a very fun chap called Joe, who gave me my first taste of Russian Heavy armour. (Thirteen IS-2's I think.) Funny thing is, This was my first and only game all day where I got to be the attacker, so (finally) I got to start with ALL of my platoons on the pitch! Hoo-rah!
The 1st turn saw me move all of my Shermans and M10's in and line up in wheat fields so that I got to take 10 17pdr (AT15) shots at his ugly Soviet armour. Now, odds are that this should have taken out at least 4 of the 7 tanks camped on his objective, but per the rest of the tourney, Lady Luck had other ideas. Boom and bang went all those lovely armour cracking guns and when the smoke cleared..... I'd managed to bail just one. That's it. Conceivably I could have won the game in my turn one, o well. The rest of the game though did see my fortunes turn around somewhat for the better though and using the far better maneuverability of my own tanks versus his slow heavies, I managed to both keep his reserves at bay and keep the objective for a 4-3 win.

All in all, the tourney was super fun, if frustrating and I got to watch a lot of super cool games with a LOT of wonderfully painted heavy armour forces after my own 1st and 2nd games finished so abruptly. :) I did learn though, that armoured companies are not my thing - much prefer to play my Poor Bloody Infantry! Next tourney I plan to attend is in June, a Mid War affair and I think I'll be bringing some Kiwis from the Italy lists. Lots and lots of stuff to bog Nazi armour down with.

Since my original tournament in February, I've managed to get my good mate Densmol interested in Flames of War. He's a big Nazi Tigers fan and so has amassed an impressive collection of heavy Nazi armour in a short amount of time. He went to the above written about tourney as well (His 1st) and almost took the 1st prize! It's good to finally have a mate who's into miniature gaming and that is as enthusiastic as I am, and also who's up for playing on a regular basis too.
We got a game in last night where he played his same list he took to the tournament versus a Canadian infantry company I hastily put together - 2000 points. I won, though it was touch and go for a bit there. Here's some pics:

This game gave me the opportunity to bring out and show off my completely finished 6pdr platoon;

and my newly touched up and rebased Heavy Mortar platoon, that were a horror when I bought them off of Ebay and now look decent enough for tabletop I think.

I'll close out with a few pics with different views of the Typhoon and latest painted Shermans. Cheers if you kept reading this far down! :) 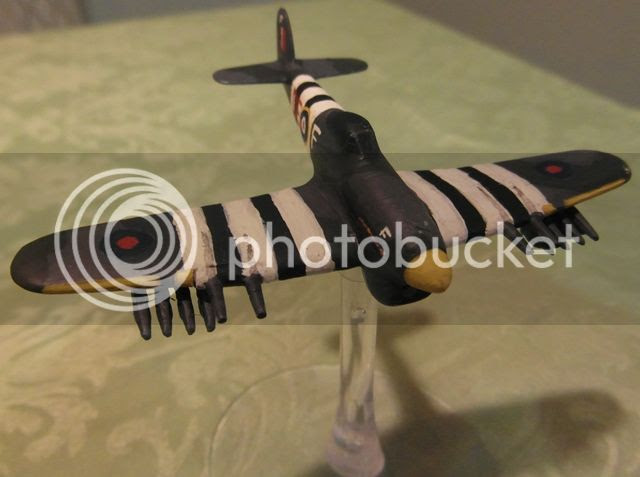 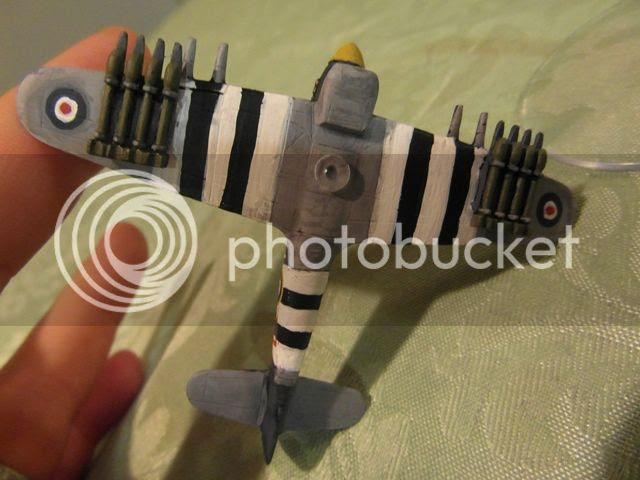 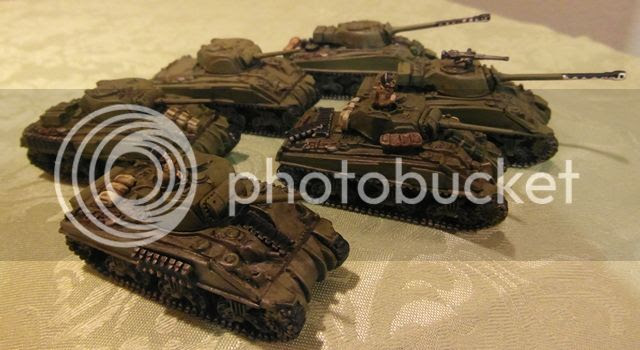 *"Where's the 40K stuff gone?!" I hear you ask? Well, I've not forgotten, nor abandoned my other projects, merely set them aside to get myself enough painted Brits so I can play multiple lists in Flames of War. Watch this space though as I can feel the Grim Dark creative juices a-flowing!*

Poor poor neglected blog. Has it been 2 months since I've seen to you? Well, I'm a firm believer that one should not attempt something if one's heart is not fully into it, so, I didn't. But I'm back again now and whilst there have been no hobby updates of late, there has been work done on the hobby front in general.

First off, I am painting furiously again for an upcoming Flames of War tournament on Sunday at ConQuestSac - 2000points of mainly armour (Max of 500 points able to be spent on other stuff.), so I've made a list from the Market Garden book, 11th Armoured that includes no fewer than ten 17pdr guns. German armour is going to die, hard. :) Along with a tank paint-fest for this, I've also finished up my 6 pdr platoon and Lloyd Carriers and a Hawker Typhoon. Pics to come very soon

Sad face all around as my Mum’s all too short visit from the UK is done with and she’s now in Las Vegas on the next leg of her journey. Good thing about Mum coming over though is that she usually brings some of my old minis that were stored in her loft! (Apparently there's still a bunch to send over - including a 1st Gen Leman Russ painted horribly, 1st Ed Dark Elf BB team and 2nd Ed Orc BB team and a bunch of other crap I haven't seen in yonks. But those are for another time.)


So here’s the haul:

1. My old Orlock gang and Necromunda Bounty Hunter. These will be useful for some Inquisimunda creations I have in mind. 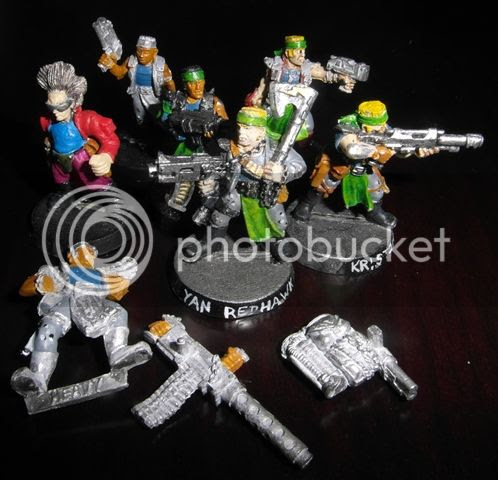 2. Yes it’s true, your eyes do not deceive you….. for one reason or another, I bought Harlequins back when they were first released. *le sigh* I’ll probably shove these up on Ebay and see what I can get. 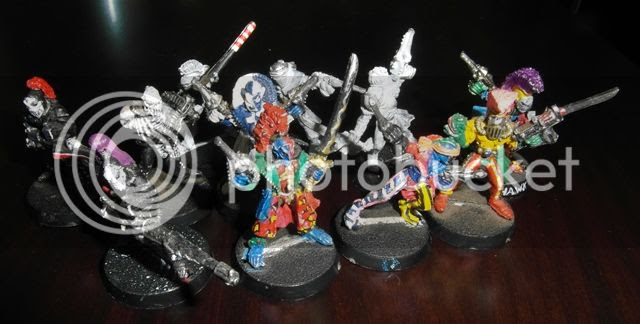 3. #2 of my Chainsaw Warriors… holy heck my painting was shite back then. Again, he’ll probably become part of some Inquisimunda project. 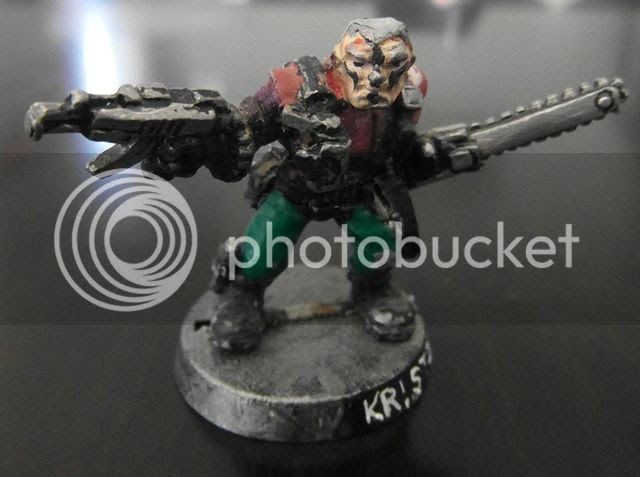 4. Something far more tasty – some old Chaos Thugs and Dwarves. These are some seriously cool and characterful minis. I might have to roll up a 2nd Chaos Warband and include them somehow!

5. Beastmen, Marauder on the left and early Citidel on the right, again, for potential future warband.

6. Drybrush city! I really liked this version of the Slaaneshi daemons. Not at all svelt and alluring as their current incarnation, maybe why I liked them so much? :) 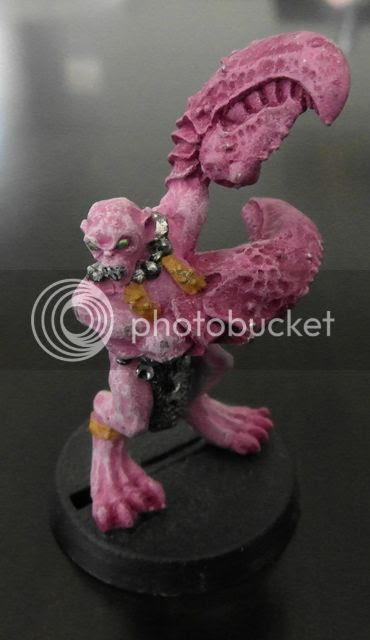 7. Stupid Highelf mage. Another one for the Ebay slaughter… 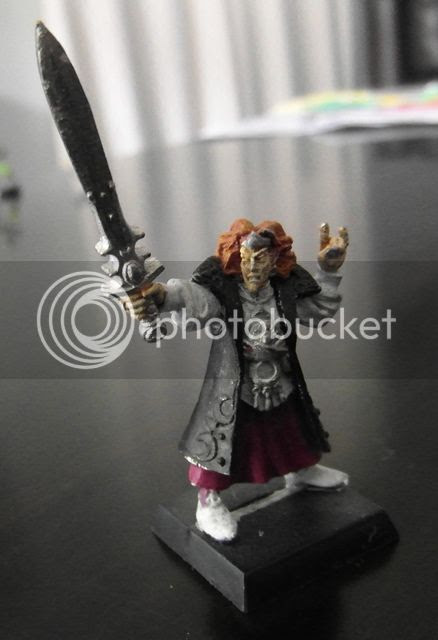 8. Super cool orc model. Tres old and full of character. Excited to paint him up just for the hell of it. 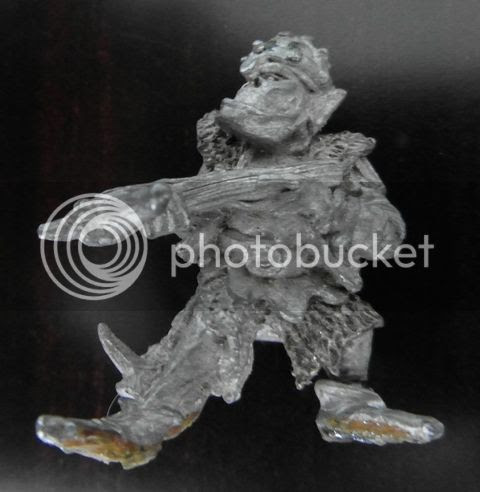 9. The one fig I was most excited to find, I’ll strip this old Marauder Warrior and use him as my Chaos Champ in my current warband I think. 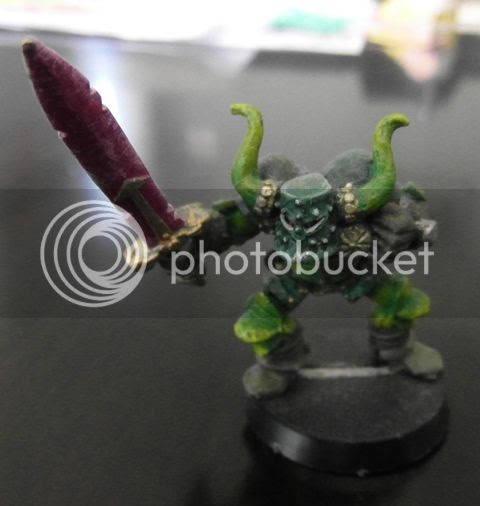 10. Some old school Citadel Norse fellows. I shall name them Cass, Thrasher, Erik and Snolb.

11. This fig was just a cool buy back when I found him in an old LGS. No idea who published the sculpt, but it is such a cool post apoc image, I’m dead excited to strip and repaint him. 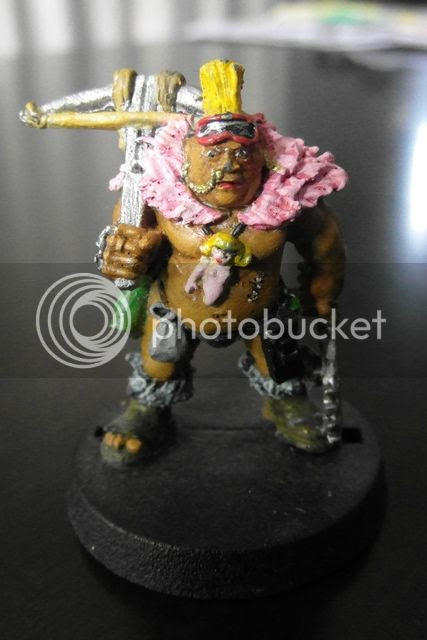 12. Lastly, there were some ziplock bags of a tonne of bits, mostly RBT01 marines, but there’s a few hidden gems in there that I’ll look into at a later date. Most of this will be put together and sold on Ebay. 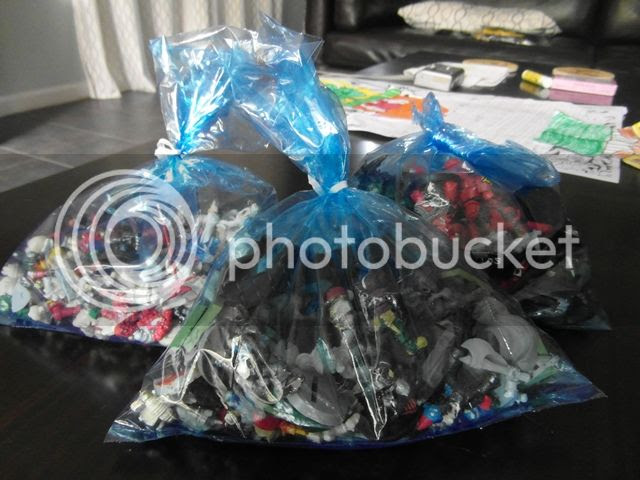