There’s a lot that’s been happening my end that explains my lack of posting these past months.

My lady and I got married, we also moved to a larger apartment and then add in all the traditional Holiday fun that comes with attending my wife’s family gatherings. No complaints from me on this though, I’ve thoroughly enjoyed being welcomed into her family and returning those sentiments as best as I can.

On the hobby side of things, a New Year is here once more and I’ve at least not been completely idle, O no.

I’ve been slowly assembling some of the model kits I have sat on my hobby shelves in preparation for the projects I intend to get done this year.

A Kellmorph for my Chaos Genestealer Cult from my Kill Team box. "Chaos" cos he has horns alright? Actually, I really liked the stock sculpt as is, but realised he would look like anyone else's and he also needed something "Chaos" about him, so yeah - horns. I like them, though there'll be some cursing as he tries to get through the lower doorjams. 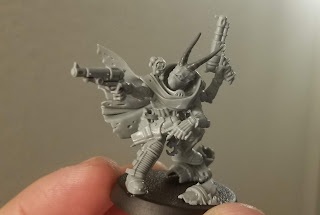 Next, a Games Workshop Leman Russ tank that was a birthday gift last October from a very good friend. The kit doesn’t seem to have changed that much since the Leman Russ was first released (I got one on release day even) and went together pretty well. In lieu of the wholly uninspiring commander mini that is supplied on the sprue, I instead stuck in an old re-casted Forge World Imperial Guard tank commander that I’d had in my bits box for around the last 10 years. I’ve also added Genestealer Cult badges on it’s hulls and a Chaos back-banner cut down to show it’s leanings toward the Chaos god Khorne. 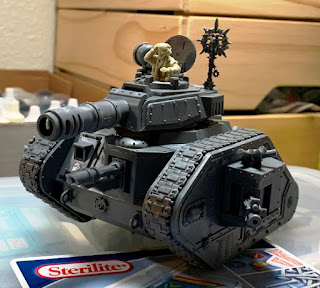 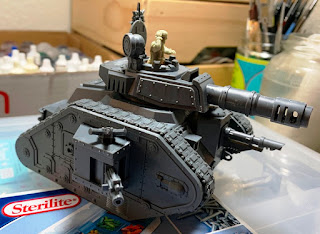 After that, I got inspired by the preview picture of a future supplement for Bolt Action, D-Day (Brit/Canadians) and began putting together a Warlord Games Churchill tank that I built as a Mark VI. The kit was not at all simple to assemble like the Leman Russ as the instructions were bloody vague. After a few evenings of cursing and fingers glued together, I finally ended up with this beast. Not a bad finished result and like the Leman Russ above, I used an alternate metal tank commander (Produced by CompanyB) as the one on the sprue was awful. 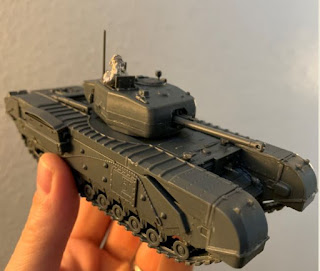 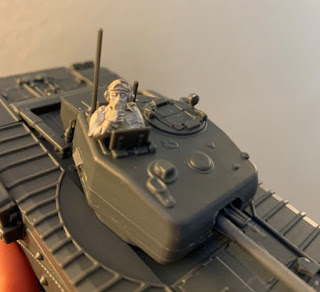 Lastly and assembly completed just last night, is this full section of Commonwealth infantry by Warlord Games for my Dieppe Landing project. These lot were a flippin pig to assemble and I had no fun at all during the process. Why on earth the designers thought that making all of the water canteens, pouches and so forth separate was a good idea, or that separate arms and weapons was “fun”, I have no idea… I’m not even sure I’ll make the remaining 15 in the box the process was so painful. Any future additions to my commonwealth will be metals for sure, though once done this ten-man squad at least looks half decent.

And that's it for the now. New place doesn't have a spot to spray paint at and I'm not sure I could get away with trying to do so on my balcony, but I'm going to see if I can't sneak in a late night effort. In the meantime, I'll be assembling more things to empty my shelves a little more and try to get posts up at least once a month as that's not really asking too much now, is it???
Posted by Dai at 16:19 16 comments: