Different things (NSFW - Or maybe it is? I dunno, I'm not sensitive to this crap)

This week has been somewhat quiet on the hobby front, mostly due to health issues again, but I persevered and got a few things finished.

First off, another Viking Bondi, now bringing my Warriors unit up to 6 out of 8. He was fun to paint and I thought some woad face-painting was fun to add, as though he was a foreigner who's been inducted into the ranks for some reason or other and now fights for viking fortune and fame.

Next Warrior on the painting bench will be this bloke. Here's a WIP pic.

My mate Steve also asked that I paint up some random critters he somehow purchased, so I started on this tiny Tortoise. Cute little bugger.


Lastly what could be seen as NSFW though I'm rather ambivalent where this stuff is concerned. so that's yer warning.

My mate Dave put in far too much money pledging on the Kingdom Death Monster Kickstarter. He's not much of a hobbyist and so I offered to put together the newly arrived expansions that he'd ordered for the game - a task that was rather daunting as there are no instructions to be found anywhere on how to assemble the monsters anywhere!

First up was the disturbing baby monster called a Gorm. This loveable beast includes a vagina-like mouth and a set of large testicles hung betwixt it's rear legs. no penis to go with them though, instead he has a mouth. Yeah - freaky.

Next up is a large model, the Sun Stalker which is equally as strange. The main part is the flaccid tentacle penis prominent in front of it and the man-boobs. Flippin wierd and a pig to put together - had to be extra careful with this one to get it all put in correctly and in the right order too.

As challenging as it was to try to assemble these sans instructions, the pieces were very well designed and once I worked it all out, they went together very snugly with only the Gorm's left hand needing trimming/sanding to get it to fit properly. They are also large models, the biggest I've assembled in a long time outside of terrain. Here's a pic to illustrate this next to a Kingdom Death White Speaker mini for comparison:


Wierdness aside, I have to say I'm very impressed with what the Kingdom Death crew have put together for their setting. I've also been asked to put together my mate's other large KD model, the Lonely Tree, which is an intimidating job to say the least. But my neck was done by the time I had finished the Sunstalker, so I'll save that job for another date. And no, I'm not painting them - I've too much of my own stuff to paint up already!
Posted by Dai at 10:59 10 comments:

Since my last post there were games played and less painted.

Let's start off with my first game of Saga Dark Ages Skirmish with a couple new gaming pals, Jess and Travis. Originally I had tried to make it to the shop to catch some Bolt Action gaming, but Travis had already packed up by the time I arrived, but luckily Jess had also turned up (To see the Bolt Action game as well) and thankfully had lugged along his Saga stuff too. We played a straight forward three-way-versus with my as Vikings, Travis as Welsh and Jess Anglo-Danes. It was a bloody affair that ended with me winning (Yay!) with only my Warlord and a single berserker remaining! o_0


Saga was fun and easy to pick up. I am eager to play again and have felt a little energy to paint up some more of my Jomsvikings so I can field my own minis next game. I'm aiming at having a 4-point force minimum fully painted and will expand to 6-points later on. So far I have my Warlord and 3 units of Hearthguard finished.

My hearthguard though, were down a man, so I added this fellow to my longaxes unit.


For my 4th point, my first warriors unit got some additions, so now they are 5 fully painted (Though minus shields as yet as I want to paint those all at the same time to give the unit a better cohesive look. 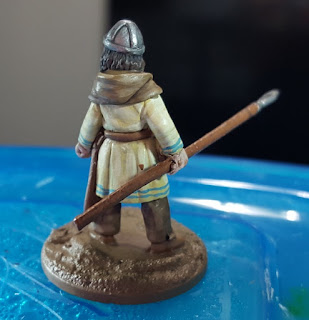 Since these pics were taken, I've done some touchups, added slight pink wash to cheeks and knuckles and based them properly.

I was also lucky enough to play a game of Chain of Command in 15mm with my mate Stewart Tuesday evening. I'd gotten my individually based 15mm Brits to an at least usable state painting wise so was excited to not to have to plonk Flames of War based minis for the battle. This kept everything far easier to keep track of during the game.

We played a defensive mission where (After a lucky dice roll) I had to hold back the German advance from one short end of the table and make sure Stew's troops didn't make it to my rear-most deployment marker. I have houses to hunker down in and a pretty good setup to deploy my own troops from after the patrol phase, so felt confident that I could manage to keep him back. Then he rolled for support points, of which I got 1/2 of the dice total. 6 was the result, so I got 3 support points and decided, sod it, I've yet to try a flame thrower in this game. Stew took off table mortar support and something else that I've since forgotten. We both agreed that a tank each on top of this would make for a more interesting affair so he took a plain Panzer IV and I a Sherman V.

I thought I'd lose for sure. Stewart rolled amazingly to get phase after phase after phase and the offtable mortar support had 75% of my boys pinned for ages, but all of a sudden his dice rebelled and mine remembered that I had threatened binning for poor performance and so after some tasty Flame Thrower BBQing of one infantry squad and a couple lucky Piat shots at his tank, along with a good mauling of his flanking squad and I had managed to get his overall force morale down to a level that won me the game.
I really like these rules and am happy I got to play again. I think I'll try to pick them up later this year.

Speaking of WW2, I got the ammo carrier for my Soviet LMG team painted up. He's in a pose to show him mid-way through tossing an ammo can to the soontobe painted gunner himself.

Now that I've got a growing painted Soviet WW2 army, it would be remiss of me to not have an Axis force to face against them on the tabletop. With the Easter sale on over at the Warlord Games website offering a very well sculpted resin Hetzer tank for a rather lovely $16 tag. It arrived swiftly from Warlord Games HQ and I was surprised that it was a single resin piece with only metal hatches and gun barrel to assemble and very minimal resin flash to remove. Colour me extremely impressed. It’s now scrubbed with soap and water and glued together ready for primer. Along with this, I picked up both the new Winter German Heer metal squad & HQ packs and SS-Charlemagne metal squad. These will form the backbone of my later War Polish defense force to count as those desperate German defenders who had to stand in the way of the massed Soviet attack after the Vistula-Oder Offensive in early 1945.

Lastly, my long planned and awaited Barbarian setting rpg campaign has begun. We’re now three sessions into the game and I think the players are enjoying my story thus far. It’s the first time I’ve GM’d a story of my own creation in about 10 years and I’m still nervous as all heck that the players are even into it, finding it interesting and/or challenging. Being a wargamer I have all sorts of gaming terrain that has made the table more interesting than our typical “draw on the game mat with a dry erase pen” efforts. Add in the minis I’ve been slapping paint on the past months and the visual appeal is at least winning the players over I think. J I plan to write up a more detailed post on the campaign including how the story's going and so forth up until the time of posting.

Will hopefully have another post up by the weekend as there'll been more painting going on this week. Cheers!
Posted by Dai at 15:06 14 comments:

Thus far a majority of these brave defenders of the Motherland have been given grey greatcoats in various shades, to account for the varying dyes they were dyed with and also fading for those who've served longest. In general, Soviet infantrymen's greatcoats came in many shades from tan, to grey-green to grey, so I wanted this, my first squad to illustrate these variances.

And here we are with my final two regular infantrymen, both in light brown coats and both flinging things. One a tasty cocktail, the other a pineapple grenade.

All that's left to paint up for this squad is their Light Machine Gun team.

Should have them finished and ready for basing this weekend and then it's on to a vehicle to switch it up I think.
Posted by Dai at 13:24 12 comments: 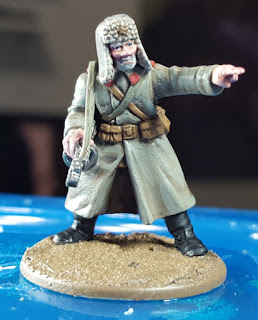 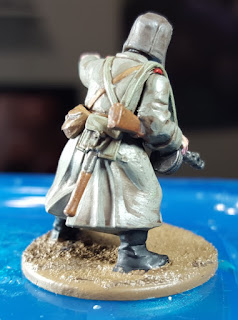 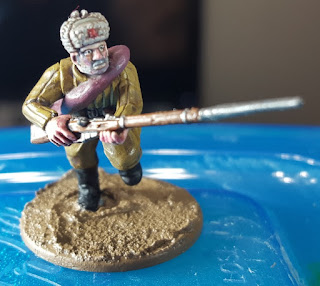 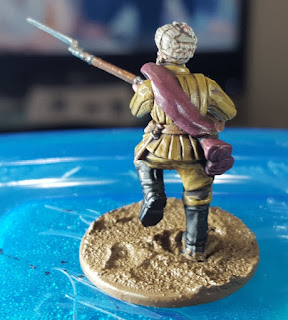 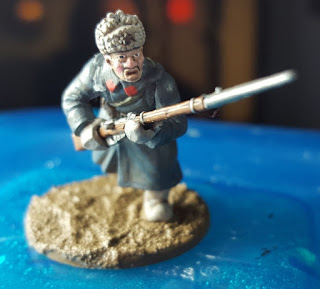 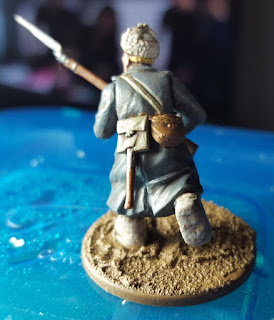 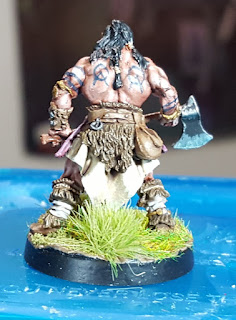