Been fighting a little painting-burnout of late, but trying to get through some of my backlog regardless. Easiest option for this were my 25-pounder Artillery who's most difficult aspects to paint are their resin bases! (Which by-the-by actually look pretty cool.)

So far I've gotten the Guns and crew, Observer and a Command team done. Only for 4 of the guns though, I'm not about to torture myself trying to paint up 8 at a time. Just have the Observer's Universal Carrier transport and the 2nd Command team to paint and it'll be done. (Won't bother to do a post once I've done them though as it's just more of the same really.)

For those interested, 25-pounder artillery are sorrowfully stat'd in Flames of War when compared to their historical precedence. These guns were used well beyond WW2 by Commonwealth forces due to just how good they were, yet the powers that be at Battlefront (Creators of the game.) made them sub-par compared to just about any other same-sized artillery piece..... These things leveled Caen for cripes sake!

In game I use these guns to drop smoke bombardments and pin pesky dug in infantry (Or enemy artillery to stop them shooting back) platoons prior to an assault. Their bombardments have a 5+ firepower (Should be an obvious 4+....) which really lets them down though as mine rarely kill anything.

On to the pics. 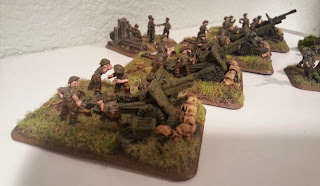 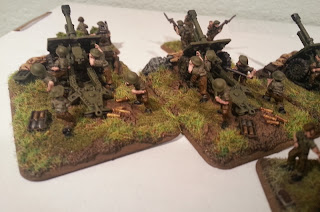 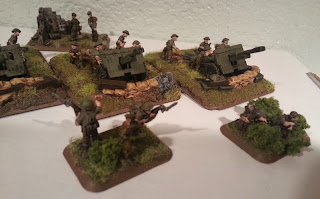 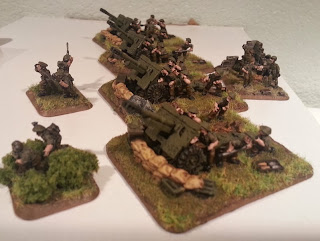 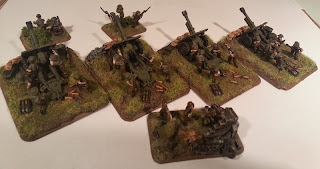 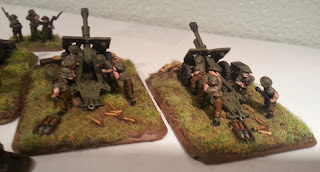 Next up on the painting table are another Armoured Car platoon from the Manitoba Dragoons - a Daimler Dingo and 2 lovely Staghound I's.  I couldn't help myself - I love Armoured Cars... Aside from some Pioneers and some 5.5" Medium Artillery, I believe I am done purchasing for my WW2 Commonwealth. (Though far from painting - I still have 2x 17pdr guns, 4x Mid War 6pdr Portee trucks, 2x Mid War Motor Infantry platoons, my Guards Armoured Recce company and a bunch of other stuff....)

This is Sergeant Major Stan Hollis. He was involved in the D-Day landings and was awarded the Victoria Cross for umpteen instances of insane bravery and bad-arsery including storming and taking out two German pill boxes in succession, single-handedly. He accomplished lots more feats of scary killingness all through to the end of the war and is deservedly a character you can take in your British Commonwealth D-Day lists.

Because of the tale of his solo bunker busting, I felt he deserved to be modeled by himself on the stand. Then I had a sudden thought that he'd at least need "Someone" to rush in with him, so I shoved on "man's best friend" in the form of this terrier (Painted up to look like my own pup', Pickles.). If anything, it just makes him stand out all the more I think, which is fine as a special character.

The PIAT Battery Carriers are based and decal-ed and finished. Didn't have a "41" unit marking decal, so went and did a horrid freehand job instead. I think I need a brighter blue in future though.

My regular opponent Densmol is currently laid up after some serious knee surgery, so I won't be able to try these out any time soon, but I've already got a lit made up and ready to showcase them once he's back in gaming level fitness!

I also managed to put together my Stan Hollis Warrior stand. He's supposed to be one bad mo-fo of a Sgt. Major or something, so I stuck him solo on a small base to show for this, but added a wee terrier-looking pup (Courtesy of Peter Pig.) to run with him as I don't like my troops being so lonely (And if you're going to run at Hun MG nests, man's best friend should be there with you to gnaw on their Bratwursts!)
Think he'll be in my next post.

Next up on the painting table is the conspicuously absent command team for my Land Mattress platoon that I'd somehow forgotten to take care of when I was painting up the rest of the stands, then on to those "terrifying" 25-pounder artillery that I've been avoiding for whatever reason. And of course a smattering of commission work.... I think I'm giving up commissions forever after this - so not fun... ~_~
Posted by Dai at 10:51 5 comments:

The PIAT Battery Universal Carrier is another crazy Canadian creation that I just had to have for my 4th Canadians.

Rules-wise they're pretty terrible to be honest, but they look so cool I couldn't help myself when a local FoW gamer said he had some spare conversion kits to make the builds (That are no longer sold by Battlefront - of course.) and I snapped one up.

So far basic painting's done, I just need to finish the basing, add a little mud and slap on some decals and I'm calling them done. No point putting extra work into a unit that will rarely (If ever) see the games table.


Hope to have the completed pics up tonight or tomorrow assuming things go to plan.

This is just a plug to give support for a mate's Kickstarter project that is currently going on.

[I'd normally stick a picture here, but don't want to get slapped incase I shouldn't have.]

I know Tim through his brother and he's a terribly talented chap who worked his arse off for Lucasarts and got shafted for his efforts. (I don't know the other blokes of the team, but have been told they're also rather good at all this gaming stuff too.)

I'd love to see this Kickstarter get funded and hope it'll end up being the first of many great titles from this burgeoning computer games company. So far what they have is still in the very early stages of development - the graphics are going to be upgraded once they get more funding (Hence the KS) and other stuff too.

Plus it looks like a lot of fun. If you like your Romans pixelated in an 8-bit style and killing barbarians throughout Europe, this might be the Kickstarter for you - plus, a mere $10 gets you a buy-in for the full game, not bad eh?

... and I hope it's something you'll want to help support and make happen.