To break up the monotony of painting up oodles of 15mm infantry, I decided to put a little more work into my Chaos Warband project and got on with my centaurs.

First off, thankfully there's only two of them, because thus far they have been rather fiddly, green-stuff-wise. I'm still trying to figure out what to do with their main horse bodies, they are large bare areas of the models and I'm at somewhat of a loss of how to decorate them, if at all. Right now they are just carved up due to removal of their saddles/blankets that had been part of their mold. 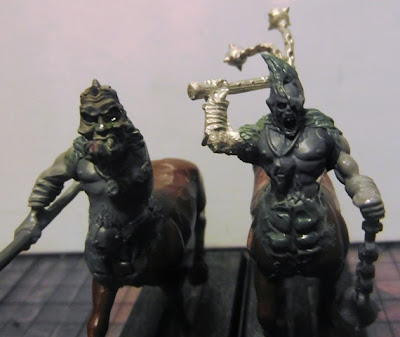 Their Dominant Attribute is “Hideous Appearance”, so I dove into my bits box trying to figure out if I had any appropriate ugly/weird looking heads pieces to show this.
The fellow on the left got a metal head from a piece I found in my LGS bits bins, some random scaled thing that had been on a long neck. It’s a little large, but I think that in itself helps to define it’s “hideousness” when compared to the centaur’s more hairier rest of it’s body. (Though I may add scales to it’s torso now I think about it…. Hrm.) (It was 12:30am when I set my tools down ~_~ ) For a weapon, he got the long spear thing from the Corpse Cart driver – I just need to bulk up that wrist a little. I’m not sure what the heck I’m going to do with his left arm…. I think I may well slap a tentacle there for gits and shiggles, even though I didn’t roll one up originally – he’s “hideous” damnit, all of him.

The strapping chap on the right got a plastic head piece that had previously been attached to an armoured fist by it’s hair. I’m guessing some sort of trophy from a Vampire Counts kit? I cut off the fist and green-stuffed some funky Jimmy Neutron hair that I think looks pretty darn cool. With his skeletal features and skin-flap peeling off his forehead, this bloke is pretty damned “hideous” I feel. Another piece from the Bits bin was that lovely flail, again, I don’t know what model it’s from. I added the bell-on-a-chain as a last minute idea, but I think I’ll use something else, as it looks a bit pants now I look at it this morning.

There's still lots to do on these two - the spear bloke needs more work done on his "abs" and they both need some sort of tail (Am trying to steer clear of traditional horse-hair looks though). I'm also considering re-attaching the spear arm to be raised up more as the angle it's at now takes away from the whole pose I think.

Comments and/or critiques are welcome.
Posted by Dai at 08:41 5 comments: