My first tourney was on Saturday. A long day, started out with me getting up at 6:30am to be at my mate's at 8. Then from there four of us car-pooled down to Gamescape North in San Rafael. After some awards ceremonies for last year's circuit, the first game got underway.

The tournament was a Late War 3-round escalation format, 1st round starting at 1280 points, then 1530 and the last round 1780. My lists for this were thusly:

(Hope the lists make some sense to those not familiar with Flames of War and WWII Commonwealth army load outs in general?)

My opponent was a nice bloke called Sam from Los Angeles who had recently moved up to the Bay Area. As soon as he started plonking down minefields during his deployment all over the fucking board, I knew this was going to be a dirty game. Funnily enough though, I should have wiped him clean off the board. I had WAY more stuff on the board than him and he had very little long range kit that could damage my own troops.
Some clever maneuvering and piff paff poof(!) one straight forward win for me! Right?

Not if my dice had anything to do with it....  I've never rolled so many 1's in my life. Sam even pitied me and offered jokingly to "take it easy on me". I smiled, declared I would roll one more "1" before games end, picked up a dice and did just that.

A poor performance perforated with poo rolling left me losing most horribly and scoring a measly 1-6. Not a good start.

Second opponent was a thoroughly fun and cool chap called Stewart. Him running a Mech' list and me an Infantry one meant I had to defend in this game, which is hard as hell in this mission as my boys were stuck around two objectives in the middle of the table and he was able to deploy from either table-end to come take them from me. Stewart ran 2 platoons of 1/2-tracks filled with a load troops, a small Puma Recce patrol, some NebelWerfers stuck back in the corner of the table and a scary 3-tank unit of Panthers that ended up being more scared of me in the end.
(I had my platoon of M10's in ambush)
I tried to spread my boys well enough between the two objectives but laid out a shite deployment anyway, leaving one poor Infantry platoon to have to hold back two full platoons of Nazi infantry AND their attendant machine-gun toting 1/2-tracks until everything I could run over to them finally arrived to back them up. In the end, they did hold off Stewart's crazy mad rush of assaulting troops long enough for my 2 regular Shermans to roll over along with my Universal Carriers and M10's and machine gun the heck out of the enemy to try to force them off the objective (My 1st brave platoon of infantry ended up dying almost to a man in the process.) and win me the game.
The best part of this game was the complete uselessness of his Panthers, who (2 of them at least) spent the whole game hiding behind a church, terrified of the two fireflies who had killed their 3rd team member in the first turn for being so cheeky as to poke it's nose out from the church and think it could even begin to win a long range fire fight against them.

Last game was my closest and another example of just how much effect "luck" has on tabletop games.
My final opponent was Forest, a gentleman of a Kiwi and we fought Brits on Canadians in a weird mission with lots of running frantically for objectives and delayed reserves and so forth. I don't particularly like the Breakthrough mission, but that's beside the point.
I started this game really strong, taking out a full platoon of 2x Shermans and 2x Firelys in my 1st turn. I then went on to roll full reserves every turn until the 3rd turn and looking like I might kill off the game before Forest's own reserves could arrive. Sadly, once again, my dice decided otherwise. Not only that, so did Forest's dice. In the corner of his deployment zone, he had placed a typically weak 2 fun Sexton battery. (Only 2 guns means he had to re-roll any hits he made on against my troops.) Only, the bugger kept rolling hits EVERY SHOT, and then RE-ROLLING them! Then 6's for firepower tests every time and two supposedly crappy guns started to make mincemeat of my force. (The artillery had a plane spotting for them and I had nothing to shoot it down with.) Couple this with my two infantry platoons failing all game to roll to un-pin and you might get the idea of how well this all went.
He also had a Typhoon buzzing about strafing and my boys were mangled. They held up in time for his reserves to come on - 3 full infantry platoons eventually - that I just couldn't hold back from the objectives for long enough, or kill enough stuff to at least get a strong loss on this one.

I ended up losing 2-5 this last game.

So in the end, I finished with 8 tournament points and was about 1/2-way in the standings of 24 players - not bad really considering how inexperienced I was at the start. I had a smashing time and an enlightening experience of it all compared to the pants Warmahordes tournament experience I had suffered prior to this and which scared me off tournament play for the past 6 years or so. I didn't have a camera to take pics, though wouldn't have had time to snap any shots even had I brought one, so apologies for that. I do know that the TO's took pics throughout the day and I'll shove some pics up here once they post them on their forums.

If you've read this far down, then thanks for keeping with it. I'm now feeling a bit more confident about the rules to this game and have even managed to get a mate at work interested (He's chosen to play King Tigers..... of course.) so I can get some more practice in before I go out to any further tournaments. For now, there are still LOTS of painting to be completed for my Brits, though I have some commission work to get on with beforehand.

Best to not stem an urge to create right? :) The Chaos Goblins for my warband are put together and ready for priming. Like I've mentioned previously, I really like the Gnoblar sculpts - very reminiscent of Paul Bonner type images of Gobs in my mind. (My all time fav GW artist.) Two have had things added or changed, the third I left alone as I really felt it has plenty of fun character by itself that didn't need to be altered. 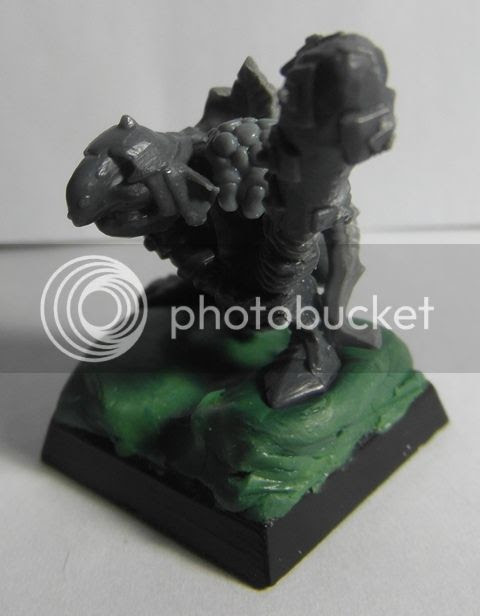 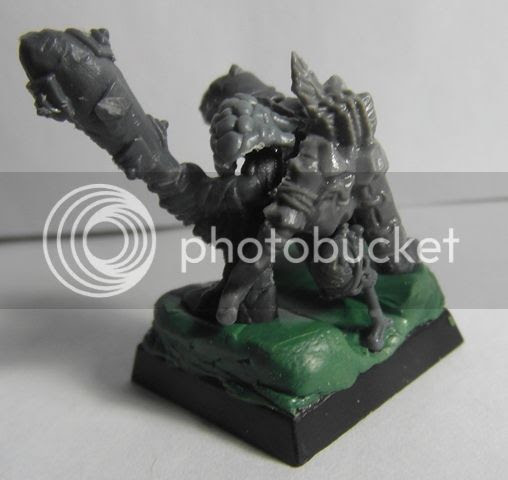 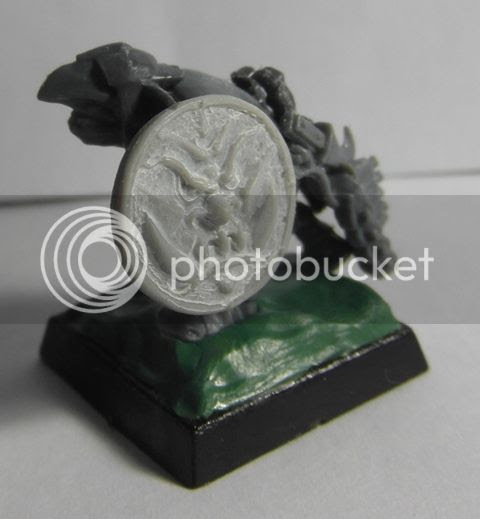 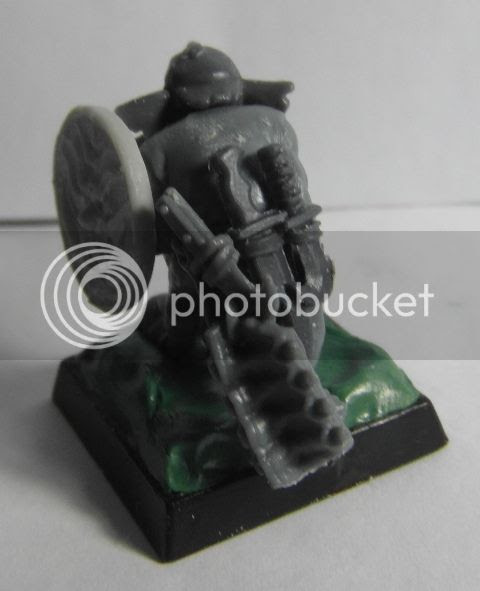 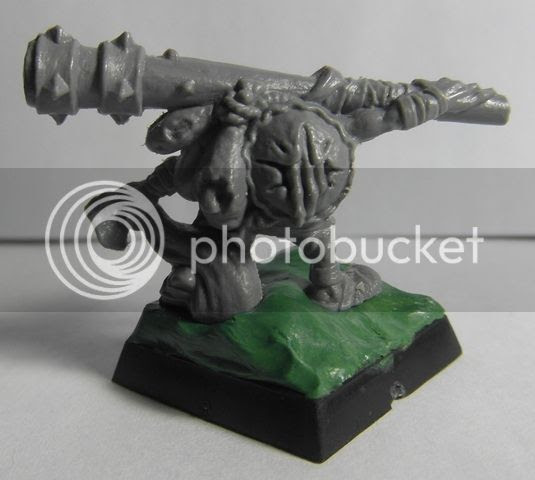 And the obligotary family shot. 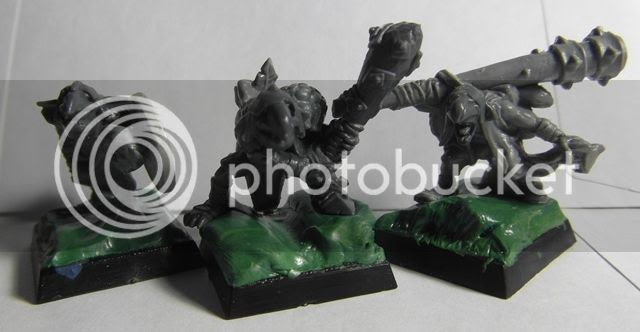 Beastmen are funny old buggers. One minute they are eating acorns from low hanging branches of a venerable Oak, the next, they come at you, all four arms swinging a menagerie of brutal hand weapons in an effort to turn you to pulp.

Four Arms - felt big shoulder mass was best way to go with non-normal placement of arms due to nasty mutation aspect of the deal: 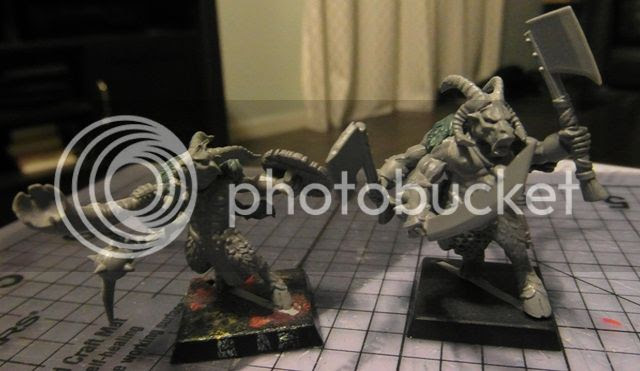 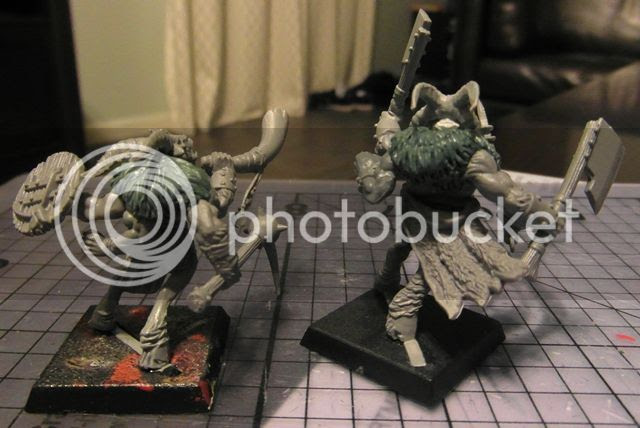 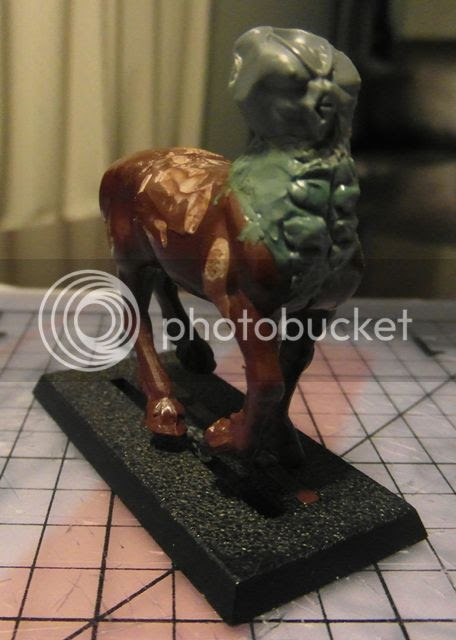 I was killing Germans before your number was dry. (Part 1 - 1st Sherman Platoon Complete!)

As the title says, the first Sherman platoon is done. I've decided I'll get everything painted to basic tabletop standard before I worry about unit markings and so forth.

(Forgive the harsh lighting - it's swallowed some depth to the green for sure.) 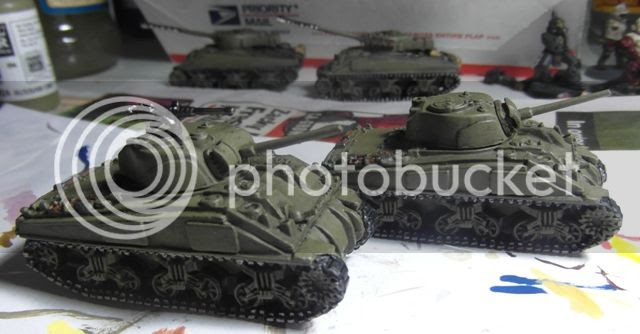 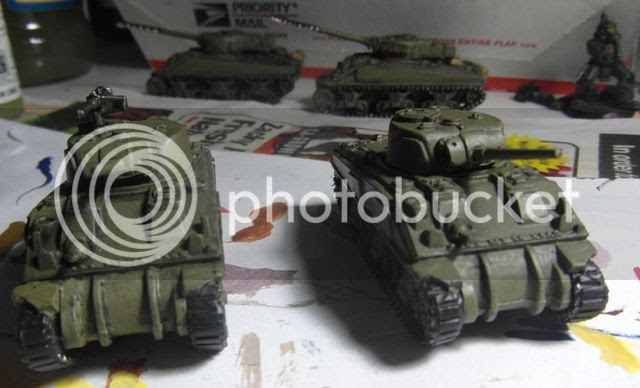 Now that they are done, to change it up a bit, I've started on the 6pdrs and almost finished the guns. Just the mass of gunteam figs to go. :) 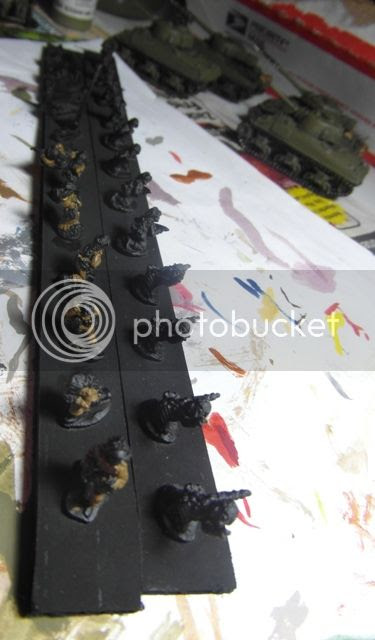 Quick update on what’s been going on of late.

Progress on the Warband challenge is going okay – so far have sculpted the troll a new foot, which isn’t too bad considering sculpting at this scale isn’t my strong suit. I found an old 3rd Edition Warhammer skeleton that I plan to take apart and decorate his base with as a prior lunch or some such. For the chaos goblins I pulled out some spare Night Goblins and completely balked at the crapness that is their sculpts - Looney Toons-esque and terrible. Frantically I looked about for an alternative option and came upon some old Gnoblar bits I had gotten for no particular reason and decided they’d be perfect. So now they are cleaned and based and read for primer. The Centaurs - well, centaur right now as I’m still waiting for the other horse to arrive from the UK - are going to be a bit more extensive work. I’m trying to keep the costs to a minimum for this project so aiming to use as much stuff from my bits collection as I can. Their torsos will be made from left over Beastman Gor torsos from my prior Beastman Penitents Guard unit and I have plenty of right arms to use on them…. Just the left arms I’m out of so maybe a tentacle or two?

I have been invited to attend a Late War Flames of War tournament in San Rafael on the 23rd. This will be my first tournament for any game in five or six years and I am somewhat nervous. My knowledge of the rules is scant at best and I’ve not had good experiences in tournament settings up until now as the typical hyper competitive attitudes I’ve experienced up until now soured me completely on the whole tournament idea. But we will see – number one concern I really should have in all this is that I have SO MANY models to paint before the event!
It’s to be an escalation deal with three rounds of play, first at 1240 points, then a middle value for the 2nd game that I can’t remember and final round game at 1780 points. You can use different lists though they have to be made from one Company list. I am thinking I’ll go with a Brit list from the new Market Garden book, Irish Guard or Canadian. Cheesy yes (Cos they are the current “it” lists.), but my lack of experience needs a boost, especially with my horrible dice rolls! :)
So thus far I have painted my infantry Company Command and a full 3 section Infantry Platoon and also a 3 carrier Universal Carriers platoon. What’s left to be done before the 23rd are 4 Sherman V tanks, 4 Sherman Fireflys, 2 M10 Achilles with 17pdrs (I plan to borrow two for the event to have a full tank destroyer platoon.), platoon of Heavy Machinegun infantry, platoon of 3” Mortars, a Hawker Typhoon, platoon of 6pdr Anti-Tank Guns and eventually (When they arrive from Ebay.) a 4.2” Heavy Mortar platoon. I also have two extra Shermans I can run as my IC’s if I want to run a tank company, but I’m not sure if I wan to play that or an Infantry company.

So not much to get on with, eh? So far, I have 2 Shermans and 2 Fireflys near to complete and have started on the MG platoon uniforms and 6pdr guns. I’ve no decals so I think I’ll attempt freehanding some rough unit markings on them. (Wish me luck!)

Needless to say, progress on anything Chaos Marines related has been paused until after the tourney.

Here’s a rubbish phone-cam pic of the WIP tanks. 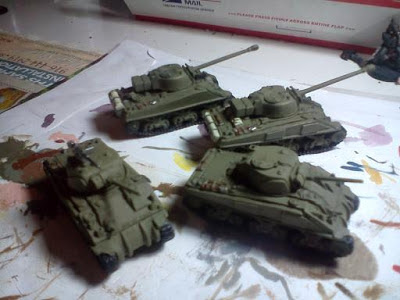 Lastly, I got an email from Dreamforge Games that my Eisenkern troopers from their most recent successful Kickstarter campaign have been put in the post! Needless to say, I am rather excited!