Yep it’s true. Along with just about everyone else in the hobby blogosphere I’m about to lay out my plans for the coming year and bore you with a short recap on the previous one! If it makes you feel any better, logging this stuff helps with motivation in general which in turn should encourage more hobby output which then means I post more often and show off what I’ve been working on, which will hopefully encourage you readers to work on your own projects and then post about said work and then encourage me to do likewise! Rinse and repeat. 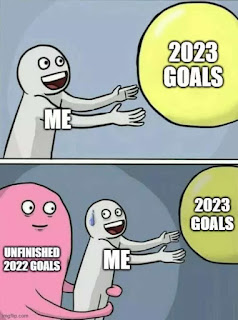 2022 for my hobby went by like a loud wet fart into clean underwear. So much potential to be proud of but sadly leaving a lackluster result. A few things were done for sure, but not nearly what I’d hoped to achieve over a 365 day period. A lot of that had to do with my private life getting stupid-busier and my space to actually attempt hobby work disappearing almost altogether. Things in these regards are soon to change a little so I’m hoping to be able to both work on projects and post about that work more so this year.

Now I’m not promising weekly postings, but I will pledge to at least posting monthly. Minimum. And I have a large new project that I should finish up this year which I am rather excited about.

My wife generously allowed me to purchase my own Xmas gift “from her” and thus started my new 28mm WW2 army for Bolt Action:1940 Greeks! Seeing as my late war Germans and Soviet’s were at a point I can call fully painted, I felt I wanted to work on a new force from the early years of the war. I had been drooling over some gorgeous sculpts on Facebook by a designer and producer out of Athens, Greece called Studio Historia, who prior to Xmas stuck up a sweet army deal on their Ebay store. Three weeks later and a shockingly small parcel arrived from the Mediterranean nation with some simply lovely 3D-printed minis inside. I have supplemented these with some Great Escape Games metal minis and a couple Etsy purchases for 3D printed tanks and transports.

So expect lots of green uniformed fellows with impressive moustaches in the near future along with captured Italian vehicles. To break up the monotony I also plan to paint up a handful of Dark Ages Saxons and Vikings too (I recently picked up Lion Rampant 2) and more random anthropomorphic minis for Burrows and Badgers.

So there’re the plans for the year and I hope to stick to them. I even hope to get in a few games too (only got to play one face to face game in 2022). As always your comments and encouragement help with the motivation to see the above happen and I thank you for that.

So until next post where I hope to have a final squad of Canadians done for my Dieppe Landing force - the final piece to finish up for that project prior to starting the Greeks. Belated Xmas and New Year best wishes!

Cheers (and apologies for the lack of pics. Promise next post will make up for that),