Somehow I've managed to fit in a spot of painting here and there into my now regularly packed daily schedule and lo and behold... I have completed the last 8 members of my 10-man German Volksgrenadier Squad (Last show-cased in April!)! Now, I have to admit, Father Time has had his way with my health and it seems that my eye-sight has deteriorated somewhat, so my detail work is not up to my previous work levels - This sucks mightily and my ego doesn't like accepting this shortcoming one bit, but I guess it means that whatever I paint from here on in will happen a little more quickly as I am forced to not spend as much time on the small areas (eyes, etc) as I used to?

These sculpts are by Warlord Games from their 28mm Bolt Action WW2 range and are produced in white metal with separate heads. Whilst not being part of their official "Winter Range", the scarves sculpted about their heads and the addition of white trousers, helmets and helmet covers will hopefully make them blend in well enough with the rest of my Winter German collection.

I love the sculpts and details on these minis and the poses are all distinctly different and interesting I think. As always though, they took a while to get done - German troops have so much extra gear compared to the average Soviet or Brit soldier and that gear comes in so many different colours to boot! (I still intend to go back a paint on the Panzerfaust labels at a later date) 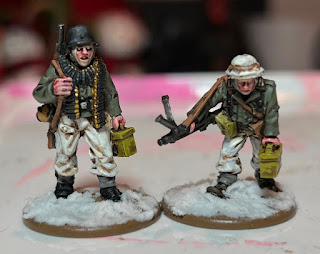 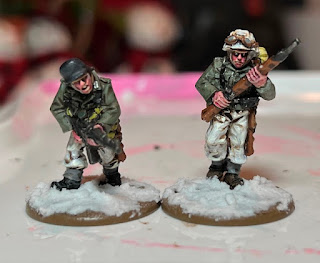 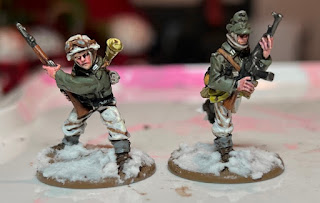 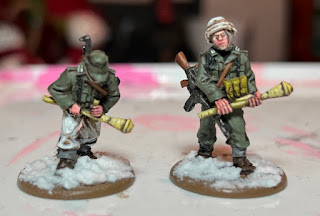 (No grass tufts or clump bush pieces on these. One, my glue dried up (!) and two, it'll help the previously previewed squad sergeant stand out.)

So that's that, my original Winter Germans project is officially "Fully Painted" and I feel pretty chuffed about it. Now I will be able to put on demo games of Bolt Action for my gaming mates when time allows in the New Year. I'll still be trying to get some more stuff done if I can find time before the end of the year, but first I feel a parade of my Winter German force might be in order after being inspired by Keith's recent postings of his impressive minis collections from many gaming genres on his own blog (Check it out here!) , so keep an eye out for that after the weekend.

(What's more, there might be a few more additions to this force in 2023 including some Great Coated Grenadiers, an MG42 team and a fearsome Panzer 4 tank.)

Thanks for taking the time to drop by my humble blog and especially for leaving a comment!