Two by Two , Hands of Blue

I haven't had much time for painting in my down time of late, but I managed to get some colour on the final sculpt of my Firefly homage minis, River Tam. She joins the four other figs from Mike McVey's Sedition Wars Kickstarter exclusives and is a nice representation of the character from the film, "Serenity" which was supposed to be a conclusion of sorts to the Firefly series. I'll not go into just how well, or not, that film filled that role as that's old news now but it did expand on the River character a LOT so I think she was a good inclusion in this set. My only complaint on this sculpt, like the others in the four-some is her soft facial details, so sadly I did not attempt to add better definition with freehand or some such as, damn, that face is a small one! (From far away, she looks fine I think in any case.) 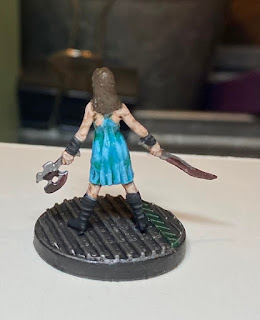 Only one film homage sculpt left to do, so that's coming up, though not sure when exactly as I'm now got 4 WW2 commandos that I'm about 30% done with, so hopefully next post I'll show those off.

Hope all are well and staying safe out there,