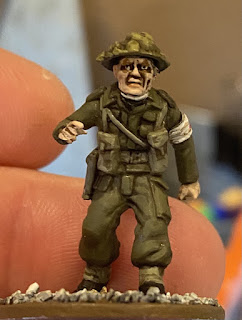 As I was working on the remaining 10 commandos for my WW2 Dieppe Landing army, I realized I had forgotten one very important piece that had yet to be built, a Canadian Army Chaplain!

I’m not sure just how many chaplains accompanied the troops during the landing, but I am aware of the most famous Canadian Chaplain who was present, Rev. John Weir Foote, the only Canadian chaplain to date to ever have been awarded the Victoria Cross. He received the medal for his tireless dedication to both the wounded and deceased on the beach, even refusing to evacuate when the beach was obviously lost so he could stay with his charges though he would consequently be kept as a POW until the end of the war.

I couldn’t find an actual British Chaplain figure anywhere online, so had to resort to using spare plastic British infantry body parts that I had left over. From the pics I saw online I knew that chaplains required shoulder boards as they kept officer rank and minister’s dog collar as well as an armband with the Red Cross for their medic duties. I tried to sculpt these pieces from green stuff and so they look a bit blobby up close but from arms length they’ll do. 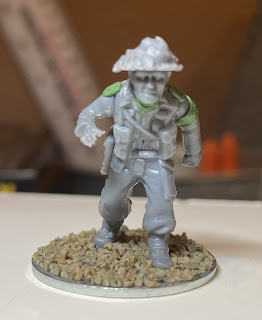 Here’s a fuzzy pic of the mini with green stuff added.

And here’s the finished result. Ingame chaplains “can” have a pistol tho I prefer them as being non-combatants so whilst I added the holstered weapon, I only did so for the option. Saying that, my grandfather was a royal naval chaplain and he was a big fan of the idea of blasting an enemy, so maybe not all chaplains are cut from the same cloth!? 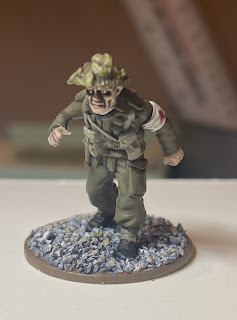 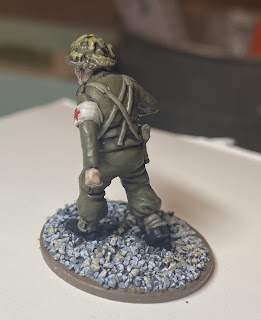 And now back to painting those commandos... have I ever mentioned how much I despise batch painting?