Just a quickie. Managed to get two squads of Brood Brothers assembled. These are the  Imperial Army types who have fallen under the Genestealer Patriarch's influence and so are now ready to rise up and take up arms against their former Imperium masters.

First squad is made of a mix of figs that I've had in my collection for years. I wanted to show these off as though they are the mix of random regular citizens and others that might fall under the Genestealer influence. From Imperium factory workers, to underhive gangers to Actual Imperial army deserters and a Bounty Hunter to lead them! 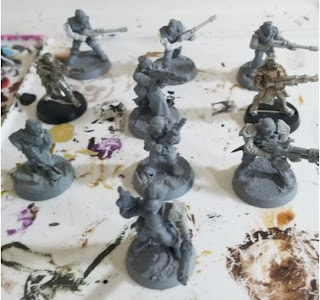 Second squad some might recognise as some old 80's plastic Imperial Gaurd with some modern GW Genestealer Cult additions (heads, pouches, etc) and also the odd pair of 3rd party resin arms here and there. I have a 2nd squad of these to assemble still. 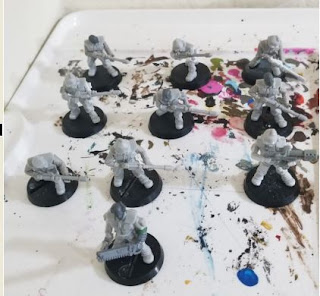 And that's all for the Chaos Genestealer Cult for the now. Next I plan to finish getting the Brood Brothers assembled and ready for priming, then on to the Kelemorph, a regular Hero to these crazy gene-scum!
Posted by Dai at 21:59