Base (coating)! How low can you go?

Before anyone gets at all excited, no pictures.


Progress on the hobby side of things has been wonderfully underwhelming, mostly due to poor health on my part and a little unhealthy time spent on SWTOR. *He types guiltily*


I have though managed to start on the group of 10 mercs. They are mostly base coated and awaiting their inevitable wash of Devlan Mud. “Where’s the love?” you might be asking? Well, I figured that these are just going to be NPC’s and non-individual-characters, so they deserve an average tabletop job at best in my opinion. Saying that, I do have plans to make each of them a named character just for fun due to each being so different a sculpt from the rest of the squad.

Base coats have also been applied to the Ogryn, Chaos Rogue Psyker, remaining Two Firewarriors, Stealth Suit fellow and Rogue Trader Prince – So not all that lazy. I also have to get a move on with a small commission for a work friend. 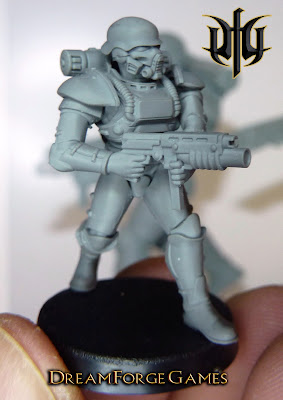 Lastly, I’ve been expecting one of these chaps to arrive in the post after supporting a Kickstarter.com project for Dream Forge Games. I think he’d make an excellent NPC antagonist to use against the player teams.

Next update will definitely include pictures, promise.