I'm a Maserati in a world of Kias

Frostgrave starting warbands are typically made up of a Wizard who represents “You”, his Apprentice who offers more opportunity to throw spells around each turn and a mixed assortment of mercenaries that you buy with a gold coin allotment.

To battle my son’s Ratmen Necromancer warband, I decided to go with the very opposite wizard type, a Thaumaturge who specializes in healing majicks and the like. For my wizard mini, I went with my already painted-up (For my rpg campaign) Druid. As his apprentice, I then decided to use my only other druid mini shown below. He’s a metal Privateer Press sculpt, Potent Bradigus. My son had the idea of painting him up with a completely different skin colour to his master, I also added some black dots as a type of tattoo after seeing an old black’n’white picture of a north African tribesman with similar markings. Not sure I carried it off right though. With this fellow done, I now have a fully painted warband to play with!


My son also got a couple more of his own Skaven ratmen painted up - a thug and a man-at-arms. He only has to paint a Templar and a Ranger and he'll also be ready for play. Now I just have to get all my terrain painted too.... Ugh.

After finishing up my Apprentice, I had more time last night so slapped some paint on this late 90's GW Daemonette. Just a cheeky grey primer, white drybrush and a load of successive washes to get a fair pastel effect. My son and wife think she looks creepy for some reason. I'll be using her as a "Medium Demon" for Frostgrave.

And last up, a real quick paintjob on a Reaper Bones animal companion sculpt. It is meant to be a hawk or some such, but I wanted it to represent a raven or crow instead so went with black. It'll do for both my rpg campaign and Frostgrave's new Lich King supplement that I bought for my Kindle to expand my mission selections and also check out the cool sounding campaign.

Last fortnight of the 6MMRPC!

Of course I slip up and forget to get my post up in time for last week's submission. Guess it'll mean that this post will be longer then, so make sure you're comfortable.

No games played since last post and I won't be able to get my FoW game in for Cameron's campaign in before the deadline of... tomorrow either. Which is poo. Ah well, real life schedules and all that.

Lots of painting done though and all over the place topics-wise at that.

First up, I went and bought the Frostgrave rules after reading some very good reviews and AAR's in blogs. I also loved the fact that I could use existing minis from my collection, so won't have to purchase new figures just to play. I even managed to get my son interested (Seems more into the hobby side of things than gaming for some reason.) and he's started painting up my odd collection of GW Skaven for his warband - of course, he plans to play them as Necromancers. So I'd like to present his own first members of his warband that he finished painting up over the weekend.

Whilst he was happy slapping paint about, I worked on some bits and pieces for the game, some treasure tokens and a boar incase it gets rolled for as a Wandering Monster. 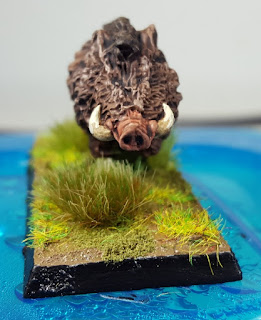 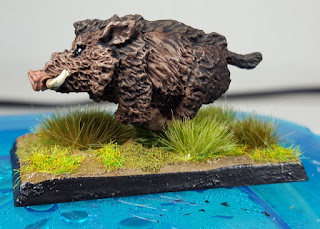 I also got a trio of Jomsviking Bondi painted up. Will do their shields when the whole unit is painted so they are more uniform. Saying that, shield-less, they are perfect candidates for use as Thugs in Frostgrave!


This fellow grabbed my attention, so I worked on him too. He's an old 1980's TSR sculpt I think. Didn't realise until I was painting his flesh colours on that he has pointed ears and tusks(!), so I decided to see if I can include him in my rpg campaign. His background will be as a half- hobgoblin, half human bully-type and due to his mixed heritage, he'll be nicknamed the Ha'penny Hob!

Last up! For my ACW project, I managed to finish and base the command stand and an infantry base for my first infantry regiment.

As mentioned maybe 2 or 7 times already in previous posts, Cameron at the Rust and the City blog is running an online Flames of War Firestorm Caen campaign. Densmol and I decided to get in on the action and got our first game underway this week.

It's D-Day and the allies are amassing off the French coast to push the hated German invaders back up into Northern Europe. The Canadian assault forces were to attack Juno beach in an effort to create a beachhead for the remainder of their assets to come ashore and fortify gains made that day.

Densmol took a German Infantry company and I a 3rd Canadian Assault Infantry Company, respective lists were taken from the Overlord and Atlantik Wall books to keep in theme. Neither of us own any beach terrain, nor fortifications, so we played the alternate mission (Fighting Withdrawal). I arranged the terrain on the board to loosely simulate the type of features that the Canadian forces would have had to cross right as they got off the beach and into the very beginning of French countryside and used this 1944 aerial photo as reference.
The forces were as follows:

My Firestorm troops were a 3rd Infantry platoon and a 2nd Sherman tank platoon, though this one had a Firefly and 2 regular shermans.

Densmol's Firestorm troops were a small 5-stand platoon of Confident Trained Infantry and a Pak40 AT Gun.

Per the scenario instructions, we played the Fighting Withdrawal mission with my Canadians as attackers. After all the Objectives were placed, these were our deployments: 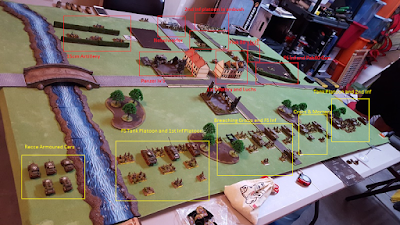 So Densmol's holding action allowed the remaining German troops who were manning the defenses at Juno Beach to get back and regroup safely and perhaps buy enough time for a counter attack whilst the Canadians get themselves reorganised.

It was a fun game on a very open table terrain-wise, though I felt it kept in theme because of this and so didn't mind the hard slog my poor bloody infantry had to get at those German positions. Saying all this though, it went on far longer than it should have due to us being rather rusty on rules after not playing for 2-3 months and we didn't end up finishing until almost 1:30am. ~_~

Round 2 rules of the campaign should be up tomorrow, so we'll try to get that in soon.
Posted by Dai at 21:43 8 comments: Links to this post