A request or two was made to see group/army pictures of my Soviet collection and now it’s all done, I’m no longer sick-as-a-dog and the rain has moved on I grabbed all the pieces and took a few pics for your delectation. Forgive the quality of these photos, they were taken in between annoying coughing fits and so might not be all that great, but they are better than none, eh?

Well for these Communist boys, I have a squad of Scouts in overalls, a Light Mortar team, Commissar, 2nd Officer, Medic and a couple of Anti-Tank rifle teams to paint up for some more options. I also plan to pick up another squad of regular infantry plus a 2nd truck and an earlier war tank to expand my playing options.

I've mentioned before I also have a German force to face the above Soviets, also a Winter (Of course) themed force in greatcoats and scarves, etc. I have almost all the pieces for this 1000 point army with just a ½-track and Panzerschreck team left to pick up. 2017 will be a little more bad-guy-ish I guess.

Due to being so ill, not much painting has been undertaken since my last post, though I did manage to work a little on a Reaper Bones Hill Giant I’d picked up ages ago. I wanted to work on something NOT-World War 2 for a bit! Am hoping to have the big bugger  finished and posted here before the Year’s end.

Tonight will also see the 1st outing of my above Soviets on the game table – a game of Bolt Action versus my regular opponent Densmol’s Germans (Reportedly bringing an evil SS list.). I’ll try to get some pics and post up an AAR on the affair for you to read.

Should I get no further posts out prior to the weekend, then I hope you all have a very happy Xmas with your loved ones, safe and warm and full of as many hobby/gaming-themed gifts as is possible! 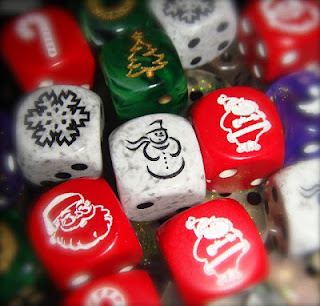 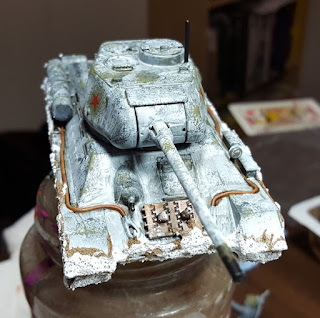 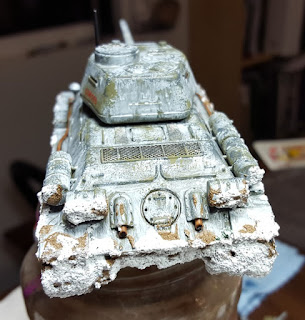 This is a Warlord Games Soviet ZIS-3 Divisional Gun. Crap pictures though - apologies, it seems it's too dark in the mornings (My typical opportunity for doing so) for photo-time.

In-game it can fire as both an Anti-tank gun AND a light howitzer. (Most guns of this size typically are classed as either-or.) This all metal kit was crisply sculpted and only had one glaring issue - game rules have it as being crewed by four men, yet the gun is sold with only three!? (Not very good planning on Warlord's part.) Lucky I had a spare infantry-man from my plastic Winter troops set to fill in!

The painting was easy - both gun and crew were a breeze to get done and fit in well enough (The metal crew are all Summer uniform, not Winter like the rest of my army but o well.) with the rest of my army. I based the whole thing on a CD, used my usual basing medium, made sure to leave indents for the crew bases so I can remove them as casualties are taken and added snow effects and some foliage. The logs are some very nice finds by my son whilst out with his Mum walking the dog. These too were painted and look okay as a makeshift log-barrier thing.

I promise better pictures will be forthcoming once I have an opportunity to get out when the lighting is better. But rain and storms are on their way to Northern California so that might be a while yet.

Finishing up this gun means I only have my tank to go and then be able to call this army the mythical "Fully Painted". Which rocks muchly. The tank is currently about 75% completed and I hope to have it done and posted here by next week, in time for my Mum's visit from Blighty when painting time will be near non-existent.

Hope everyone's staying warm out there!
Posted by Dai at 13:31 18 comments: