Spent the past couple of painting sessions working on the Kroot Void Master of the Rogue Trader crew, K’Kulluk.


This fig was a pain in the rear parts to paint, but I like the finished result.

I’m now on to the next of the Crew, 3-armed Hersus Vorden who has pretty much all of his base colours applied and is now waiting shading, highlighting and the like. On top of that, all of the rest of the teams are now primed and sat ready for their individual turns on the painting mill. 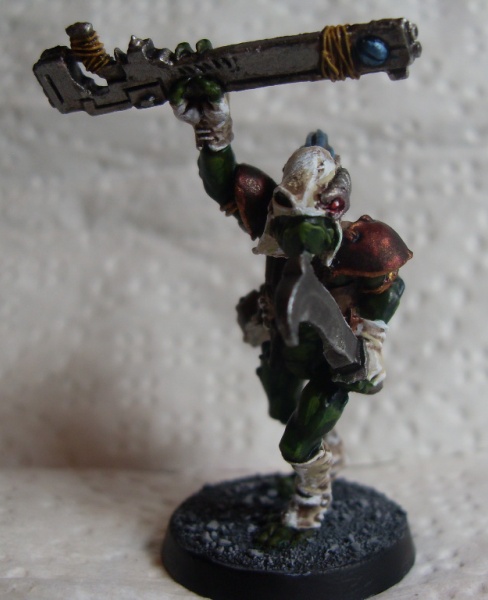 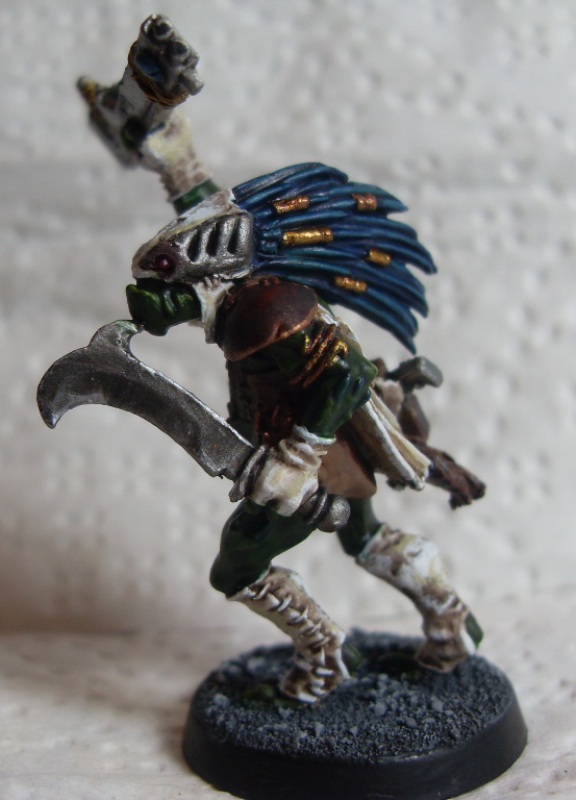 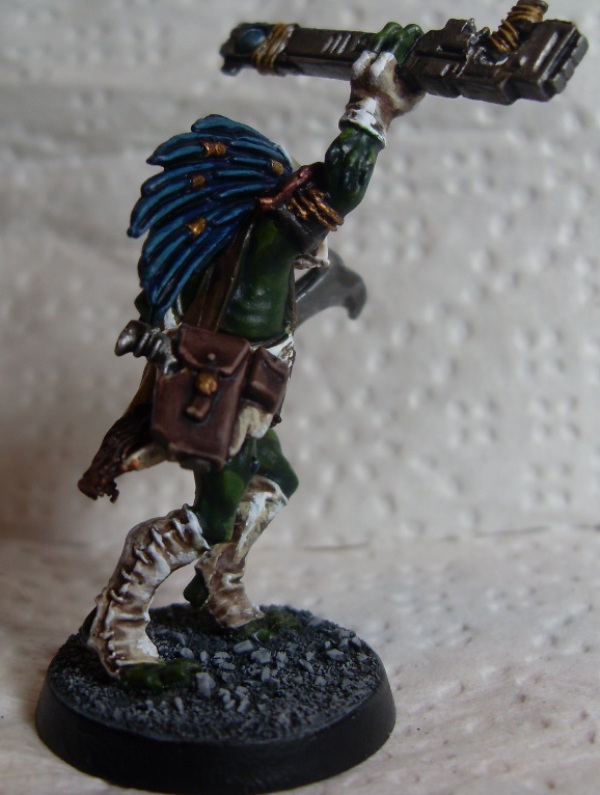 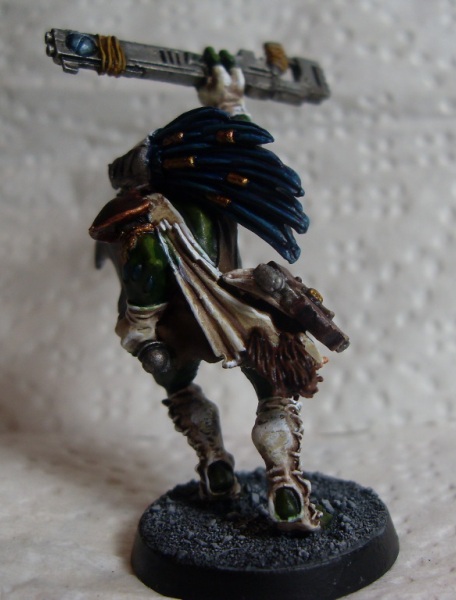 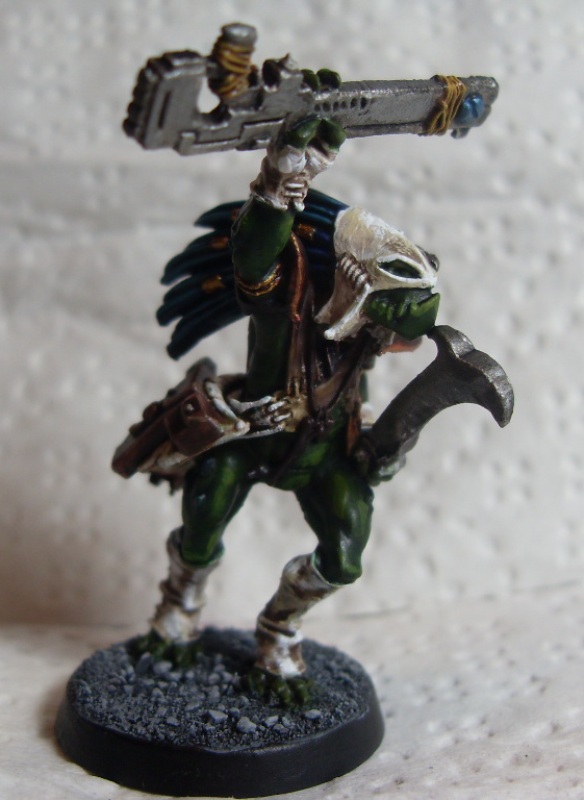 Posted by Dai at 11:08 No comments: Links to this post

These past few days have seen a spike in painting creative juice levels or something. So I've been working on a couple of the team members from the Rogue Trader Crew and can now happily say they are done.

Because it's 12:30am I'll keep this short, so here are the pics - 1st, Castro the Squat Arch Militant: 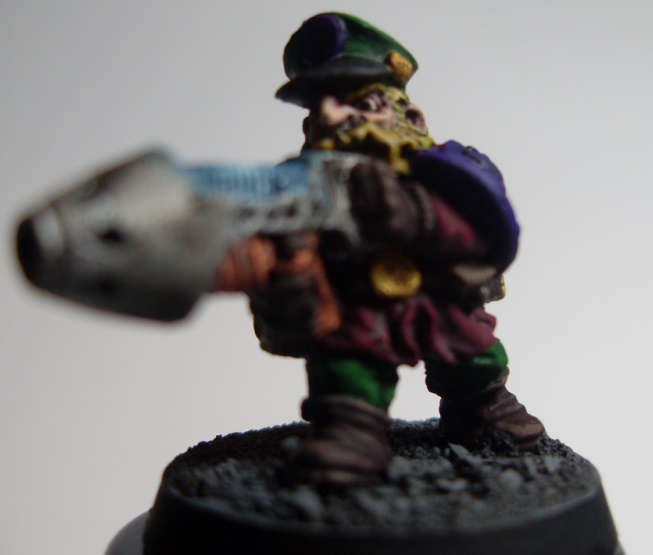 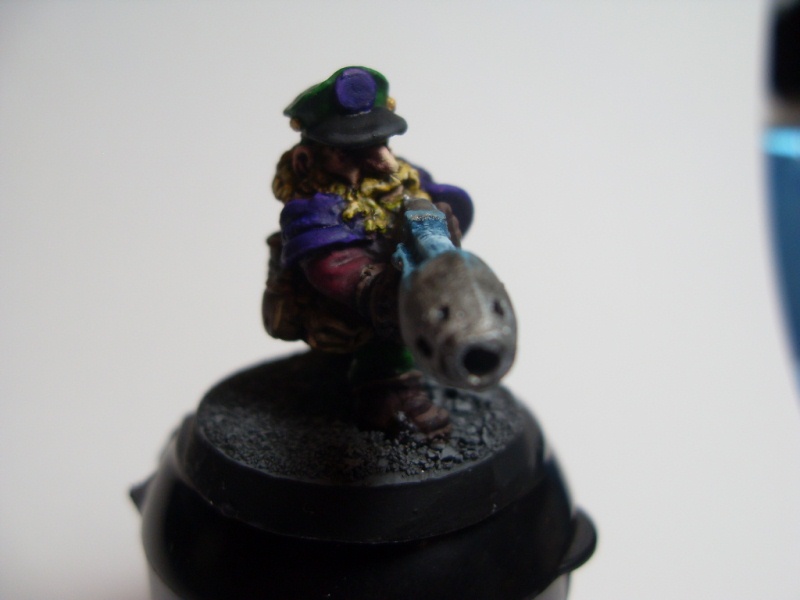 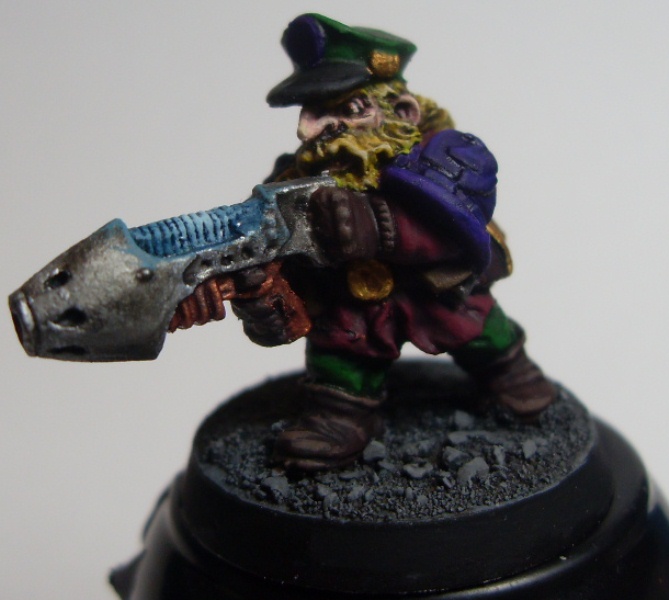 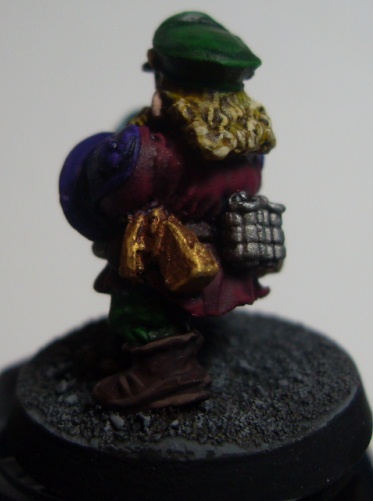 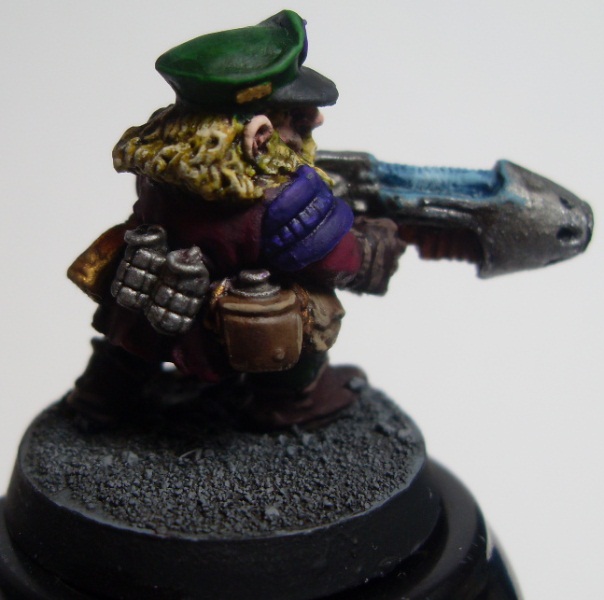 Bit colourful isn't he? I like it. You might also see in the first pic that I even coloured the iris in his open eye brown. Or not - my camera is a point and click and only offers average macro function at the best of times. I like him regardless.

Next I offer Marco Gariboldi, the Bounty Hunter Hired Gun: 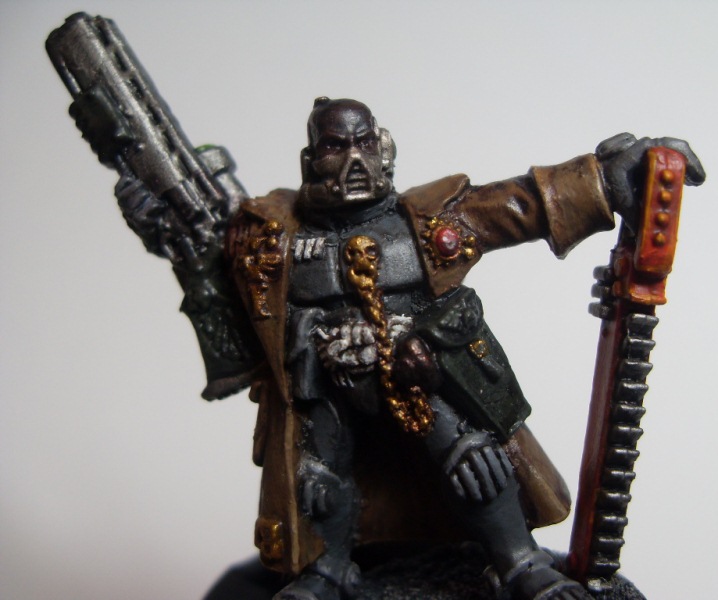 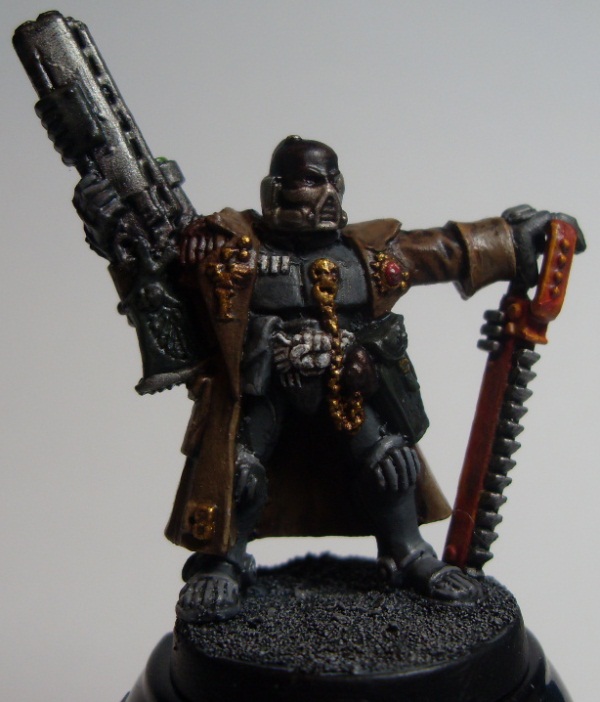 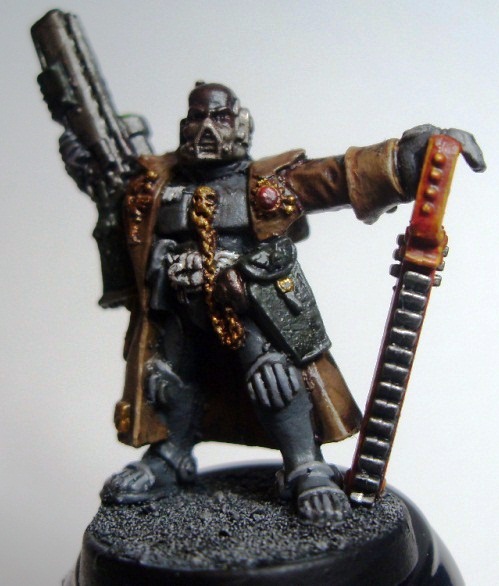 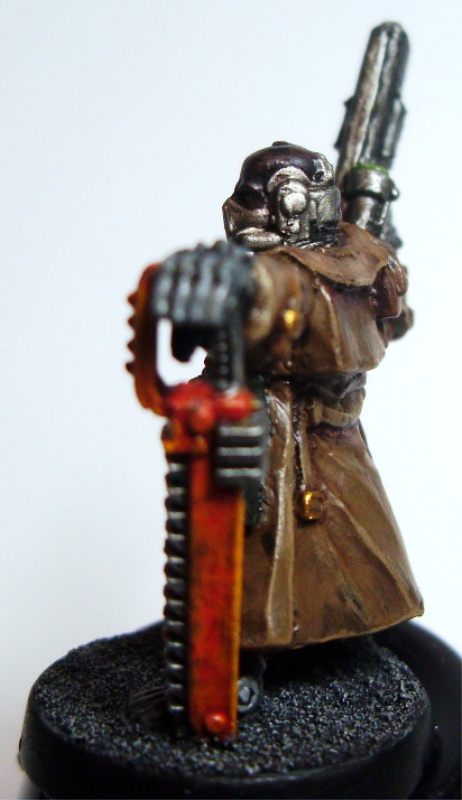 Mr Gariboldi (Bab' 5 anyone?) was dead fun to paint, more so than I was expecting. I wanted a drab scheme for the chap to offer his supposed "neutral" status among the crew.

Lastly I offer Gunter who isn't of the Rogue Trader Crew, but of the Nurgle Chaos Coven. He is about the most extensively I've converted out of any of the figs in my =][=munda campaign. He was painted some time ago, but I have stuck a few new washes on him and he looks a little better now. 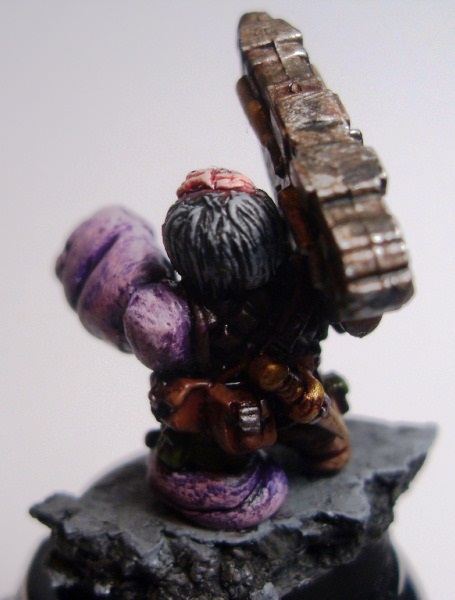 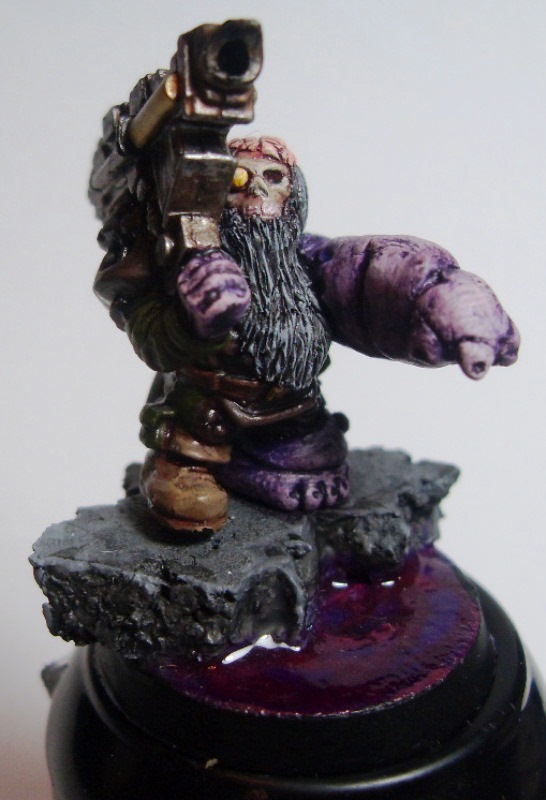 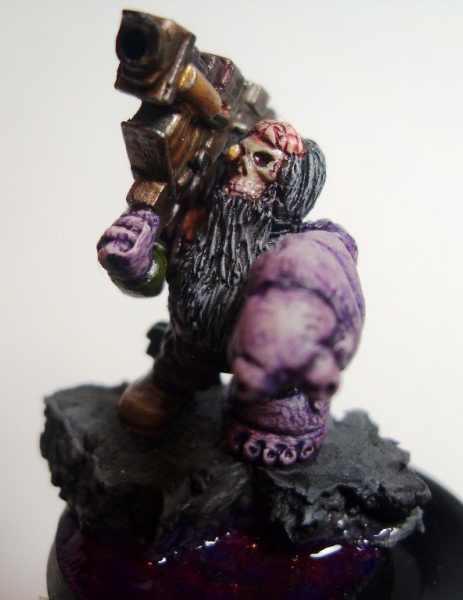 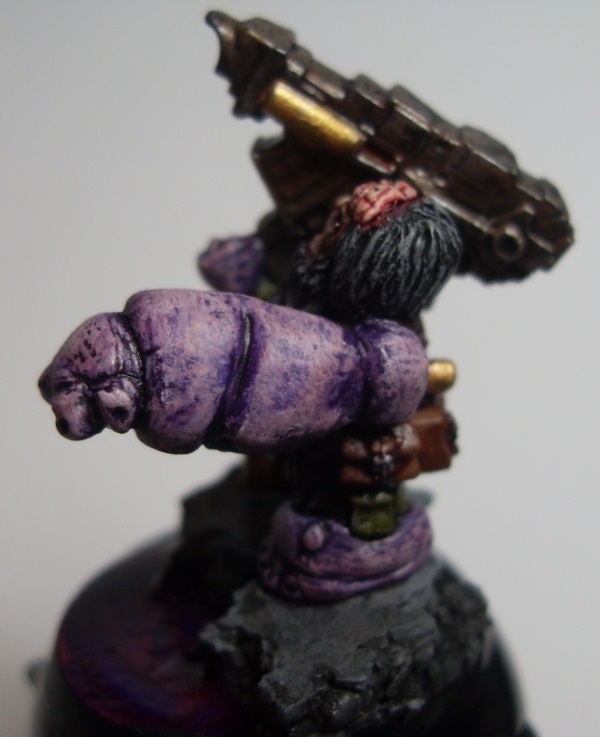 Next up in the painting mill is the Kroot Void Master K'Kulluck. Pissing irritating figure to paint if you ask me.

Here's a quick update to show where I'm at currently on the teams.

Next to the Rogue Trader Crew, these guys are my most complete team. 7 miniatures, all ready for primer and paint. My fav of these is the RedBoxGames "Fat Fergus" monk toting the flamer in the back row. He oozes the confidence and arrogance I imagine a fighting man of the cloth to wield. The three greatcoated Acolytes are by Wargames Factory and the short fellow at the front right is the Privateerpress figure, Alten Ashley who is weilding an impressive meltagun with an attatched Exterminator Cartridge in case he gets swamped by multiple foes. 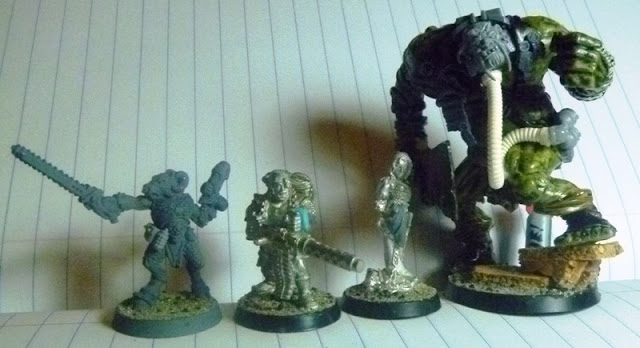 I'm a big fan of the old Imperial Beastmen from Rogue Trader days. The idea of them being seen as mutants trying to atone for their "sin of being" really kicks arse in my mind. This team is small, only 5 members due to the expensive loadouts each team member has. The team leader (Interrogator) is conspicuously absent as he's yet to be purchased, though I have mentioned as much before.
Nurgle Chaos Coven 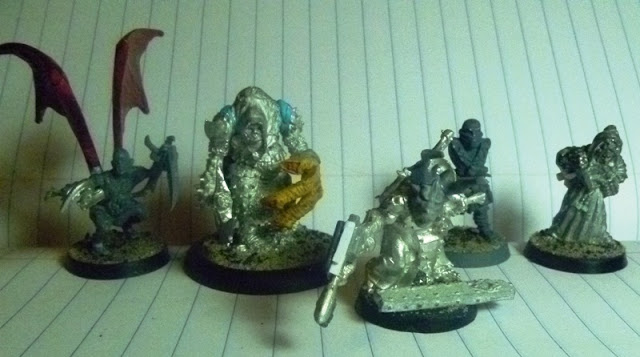 This team is missing two Squat members from the pic as they are in a little disrepair after a wee fight that ended with them on the floor. (Or they fell off my painting table after the cat jumped unexpectedly up there last night?) Be not affraid tho, because they will be back all too soon in their Nurgley grossness. So as mentioned, there is quite a hodgepodge of figures in this group. The leader is Skaven Warlord Spinetail with a head and weapon swap. He's the leader of this Coven and a powerful Beastman Psyker. The winged... "thing" on the left is a daemonhost, all mutated with tentacle and claw and crazed expression. Built from a Mantic Ghoul - lovely sculpt, full of character. I hope he'll look as cool once painted as he does in my head. Next to him is a Big Mutie with a large Nurgle Greater Daemon hand from 1990 or some such that I had spare to represent as his mutated claw. The other two are old rare GW figs that I've had since I were a wee lad. 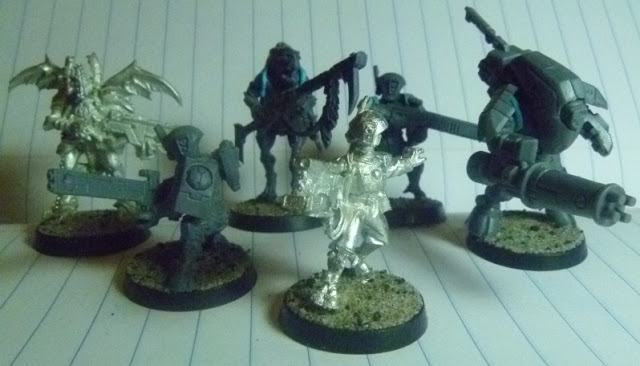 One of my friends was so excited to play in this game that he went and spent $$$ on ebay to have his own Tau Team because at the time I did not have any Tau figures. The team tried to take advantage of the rules and be as diverse as a xenos unit could be. Two Fire Warriors, a Stealth Suited Specialist, Vespid, Kroot and the metal leader at front. There's also a Shield Drone that I forgot to include in this pic.

These mixed bag of RT thru current range Imperial Guard and other fun figs are going to act as my (GM) figs for whatever scenario they fit. They came in all sorts of states from headless through to feetless. The Arab looking bolter chap is intended to be their leader. The old land speeder driver at the front left is actually sat upon a pile of rucksacks.

You might notice a missing team here..... Yes, that's right, in my 1am photo-taking frenzy last night I completely forgot to take pictures of the Rogue Trader Crew. But seeing as it's already been featured below in my eearliest entries it doesn't matter all that much. A few new changes have been  made to the team members, but nothing so much that I need to post them again before they are painted I think.

Any comments and or critiques are welcome at this point, though with these simple snapshots, I know there's not much to go by.
Posted by Dai at 10:40 3 comments: Links to this post

Any Which Way But

How fleeting that moment of creative slowness ended up being.....

Spent the last two days grey-stuffing and glueing and converting and kitbashing to my heart's content. I'm pretty much damn near done with this part and my 5 teams are almost ready for paint!

1. Rogue Trader Crew (All undercoated and ready for paint.)

2. Puritan Ordo Malleus Cell (A little gravel on their bases and undercoat needed then paint!)

3. Radical Ordo Malleus Cell (Still waiting on the actual fig I intend to use as this team’s leader ((Interrogator)) otherwise at the same stage as the Puritan team.)

4. Nurgle Chaos Coven (A little gravel on their bases and undercoat needed then paint!)

5. Tau Kill Team (As above, tho two models are lacking “Swords”. No Tau have swords aside from a Forge World Crisis Suit commander. What the hell is a tau sword supposed to look like anyway – I didn’t think they used them?!?)

I’ve also assembled a 9 or 10 man unit of troops for a scenario I’m planning involving patrols and guards and something the players’ teams will be looking to get from them. Most all of these figs are old Rogue Trader figs that came to me from a lovely chap back in Blighty. They did need a little TLC though, with some having no heads and one heavy weapons trooper needing brand new feet. (Gosh how my sculpting skills lack….)

So in all, lots of photos need taking, eh? Hopefully have some nice pictures up of primed teams waiting for their licks of colour in my next entry. Now I just have to come up with colour schemes that sit well with me. Hrm….
Posted by Dai at 15:38 No comments: Links to this post