As promised pics of the three completed Puritan Inquisition troopers, Acolytes Kesick Walsh and Barclay. These masked terrors are Contessa Triantafilou's attack dogs, eager to rid the Imperium of any deemed sick with the taint of the Eternal Foe (Who's name shall never be mentioned.).
Impossible to tell apart whilst within their all encompassing armour to any outsider, it is this very faceless value that strikes the most fear into the foes of the Inquisition and the Contessa wields her dogs wickedly and without mercy.
Before each mission liturgies are barked out the Emperor of Mankind and each Acolyte takes of their own life's blood and daubs it upon their breastplates in the symbol of the Inquisition, the better to protect from the terrors of the Warp.

These three pretty much were the simplest and most fun to paint thus far of all of this project. I really wanted to get away from the typical "Black or grey" schemes that I've seen these Wargames Factory greatcoat minis done as and so went for brown instead. Not sure the cream face plates and gloves work, but I had originally thought to make them whiter using Star Wars Storm Troopers as inspiration. If you look closely, you can see that there is still blood left over on the gloves of their left hands from after they applied it to their armour. 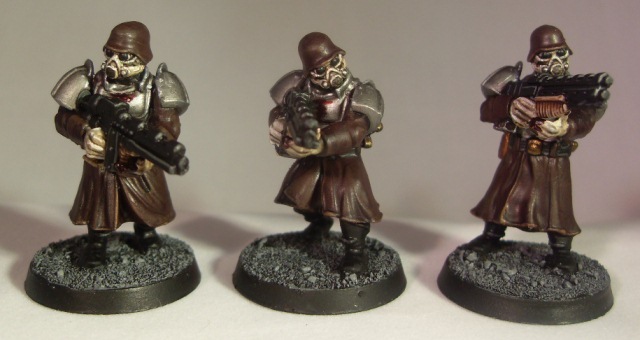 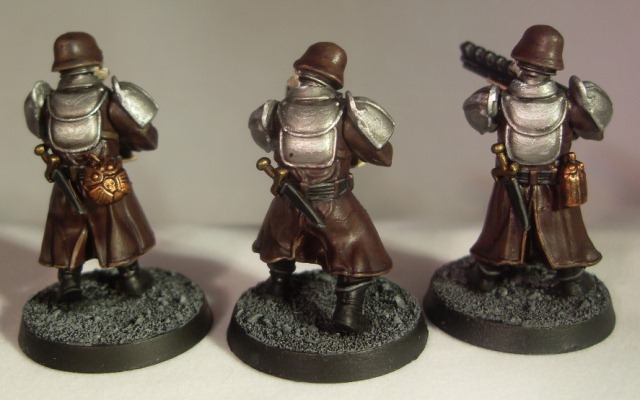