This week was a bit meager on the hobby output side of things. Between spending time with  mates, going to see an International rugby double-header event and so forth, these two finished minis are it for week 7 of the Challenge.
First up, another Viking Hirdman for my Dark Ages project. Love this pose, he’s about to wreck someone’s day with that Danish-axe. Simple paint job with a bit of clumsy freehand for the trim on his jerkin. (I hope to get some more of these done before my next update so my nifty Draxian ™ progress charts can show more green than yellow!) 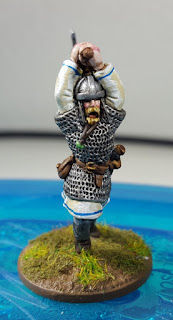 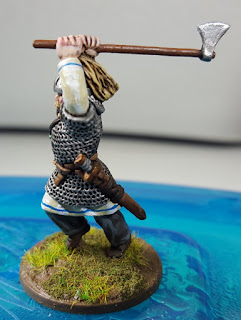 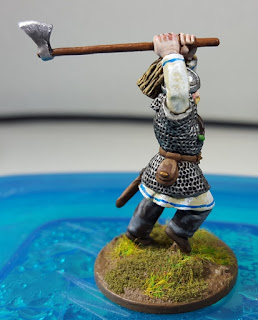 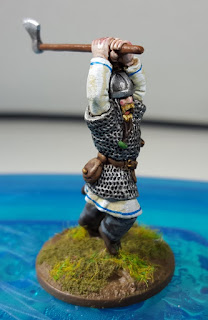 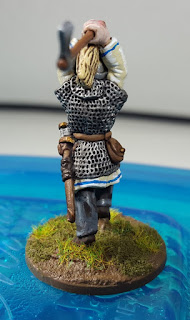 The other piece is another mini that I will be using for my rpg campaign. This was a Wizkids Heroclix lizardman that my son requested I paint up and use in my upcoming rpg campaign – but I decided instead it’ll be a Troglodyte gladiator. The sculpt was flippin’ horrible though with terrible detail all over the face and hands. Still, although not my best work by far, I like the finished result and look forward to plonking him down in-game. 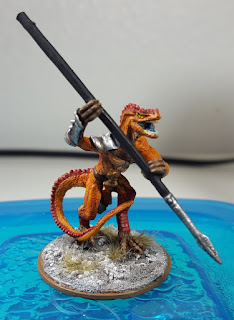 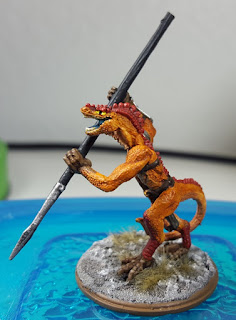 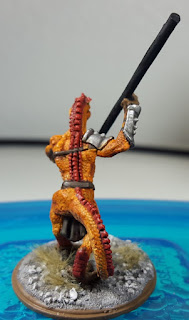 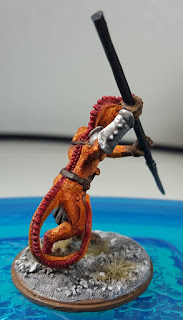 I got a couple games of Flames of War in as well against my old pal Densmol. Nice to be playing again after some months off. He picked up some 5.5” Medium Artillery guns so that my Brit/Canadian artillery will finally be able to scare people (Cos 25-pounders in Flames of War are utter pants). And they were the main damage dealer in both games (Including an attached AOP flying observer) with both Densmol’s Fallschirmjager (German paratroops) and Schwere Panzer (Heavy tanks) companies suffered under their heavy barrages. I can’t wait to get these painted up so they match the rest of my force.

Lastly – Kind old bugger Admiral Drax mentioned in a comment over on Cameron’s blog that Warlord Games are having a stupid good saleright now on their rulebooks. Buy one and get a free box of 30-40 plastic infantry or a tank or whatever (Sale finishes 31st July though.). It’s a sweet way to lure simpletons like me to get into a games system. So yeah, me and Densmol are just waiting for our new Bolt Action rulebooks to arrive…. And our Winter Soviets (Me) and German Grenadiers (Him) infantry boxes. 28mm WW2 gaming here we come. I’m thinking Some super late “Soviets attacking Germany in the Winter months”; mainly so I have an excuse to buy an IS-2 tank.
Posted by Dai at 15:41